Find a Majestic Princess Cruise from

Wide range of venues, lots of entertainment and dining designed by Michelin-starred chefs

Might feel too big if you're used to smaller Australian ships

A bigger offering of Princess Cruises' best, plus unique features not found on other ships

Launched in 2017, Majestic Princess is the newest and largest Princess Cruises ship ever to sail in Australia and New Zealand. Originally designed for the Chinese market, Majestic is not overwhelmingly Asian; it could be more accurately described as international, given its French, Italian, American, Taiwanese and Aussie touches.

Free Price Drop Alerts
Get Majestic Princess price drops
250,000+ people have entered their email
By proceeding, you agree to Cruise Critic’s Privacy Policy and Terms of Use.
THANK YOU FOR SIGNING UP!

Used to sailing on older, albeit refurbished, Princess ships, Australians will be pleased to find Majestic in showroom condition. Amenities that are new to local shores include the SeaWalk, a glass walkway that extends over the ocean; the adults-only Hollywood Pool Club and Conservatory with private cabanas; Watercolor Fantasy, a dancing fountain of lights and music; Bullseye Laser Shooting Range for fixed target practice; Princess Live! TV studio, and a bubble tea kiosk next door.

Additionally, it has the line's largest ever thermal suite, Movies Under the Stars and a dozen places to eat, some of which are new for Princess and were designed by Michelin-starred chefs (see the Dining section for more details). Another highlight is Fantastic Journey, a technologically advanced pop musical with brilliant performances, costumes and special effects including the use of drones. If you like art, there are lots of quirky pieces onboard, but also be sure to check out the murals on the outdoor, upper decks, which make you wonder why all ships don't use their vast, white walls as canvases.

Since leaving Asia, the ship's six private karaoke rooms have been reduced to one, with the remaining space to be used for spa treatments and internet. The smoking policy in the casino has also changes, with cigarettes permitted only at a designated area of an outdoor deck. Some food and drink selections are currently under revision to suit Aussie tastes, too.

The heart of the ship is the Piazza, claimed to be the biggest atrium afloat, rising three decks high beneath a massive, one-of-a-kind, blue chandelier inspired by ocean waves. Surrounded by bars, a 24-hour cafe and 1,000 sq. m of designer shopping, this busy area is positioned so that everyone walks through on their way to or from the restaurants and theatre. Buzzing from morning to night, it is used for Zumba and dance classes, live music and other entertainment such as juggling, acrobatics and fashion parades. It's also the late-night hot spot, as there is no nightclub onboard. While this open space can feel like you're partying in the middle of a Westfield shopping centre, it makes sense to bring the DJ to the people, rather than trying to fill an inconveniently located venue at the other end of the ship.

Unfortunately the Westfield vibe spreads to anything nearby, such as the French bistro, La Mer. The cuisine and service are superb but the location and layout are terrible. With no frontage to block the noise from the Piazza, it has the annoying ambience of a food court. Harmony, the new Cantonese eatery, scores a better setting and its menu is equally impressive. Other foodie finds include the poolside grills serving lobster and noodle soups -- a great benefit of an "Asian ship" -- along with free burgers and hot dogs.

We sailed on one of the few departures from Taipei and many of the cabins were occupied by three or four people, causing the ship to feel like it was close to full capacity (4,250 passengers); however, crowds and queues were only bad in the buffet and when disembarking in ports. Conversely, the benefit of this larger size is a wider variety of facilities, new and exclusive venues and more crew, giving Australians a chance to experience the best things that Princess has to offer.

View All Itineraries for Majestic Princess (23)

When based in China, passengers are mostly Chinese; in Taiwan, more Taiwanese join the short sailings; and in the seasonal homeport of Sydney, almost everyone will be Australian. Many families and multigenerational groups choose Princess for its varied activities and solid programs at the kids' clubs, especially during school holidays. Longer itineraries attract retirees; the average age skews younger on cruises of a week or less.

'Smart casual' is Princess's description but Australians tend to dress even more casually during the day. The evenings are classier and most cruises have one or two (optional) formal nights where women glam up in gowns or cocktail dresses and men wear tuxes or dark suits. No swimwear, jeans, singlets or shorts are allowed in the restaurants at dinnertime.

For more details about activities, dining and cabins, click on the menu at the top of this page. 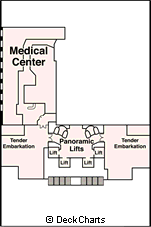 Find a Majestic Princess Cruise from

Get to know who you’ll be sailing with