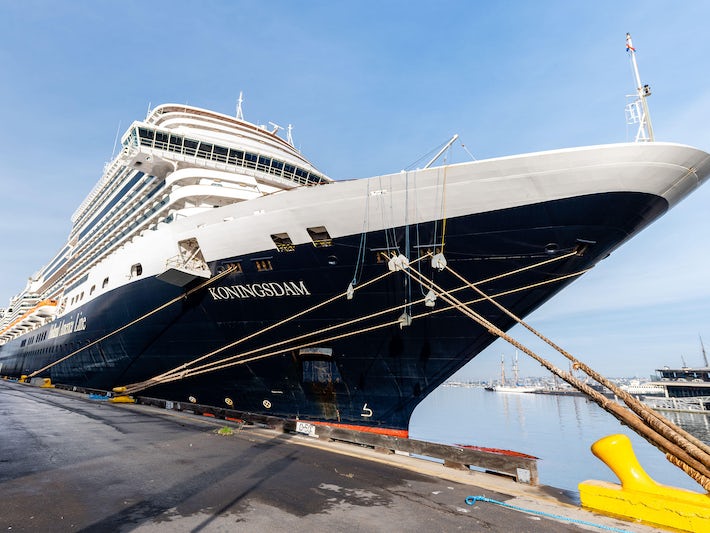 Most luxurious HAL ship will appeal to many types of cruisers

The ship feels luxurious, with thick carpets, leather chairs and lots of expensive artwork adorning the walls and in the public spaces. The ship is music-themed throughout, and you'll spot prints, paintings and sculptures of pop stars, musicians and instruments almost everywhere you turn. You may also notice a few familiar design traits, if you have traveled with Celebrity (they share the same designer, Adam D. Tihany) -- not least in the stunning Dining Room, with a soaring wine tower as its centerpiece.

Koningsdam is aimed squarely at an "upper premium" clientele: discerning, wealthy and happy to pay for the things they enjoy in life, such as a good bottle of wine or a favorite whiskey. Cabins and public areas feel like a high-end hotel, the entertainment is slick and polished and the food is some of the finest we've tasted onboard a cruise ship.

The ship takes some of the best features from the rest of the fleet -- such as the Culinary Arts Center, music tie-ups, exclusive adults-only area and outstanding specialty restaurants -- and enhances them, by making them bigger, such as the double-deck lido, or adding more options, such as adding a dinner component to the Culinary Arts Center or creating Lincoln Center and Billboard Onboard music venues to join the B.B. King Blues Club.

But significantly, Koningsdam also sees the debut of a number of new features. These include a French-style brasserie; a double-deck, glass-roofed Lido Deck, where evening movies are screened; a huge theater with a giant surround screen; a partnership with a venerable Washington State winery; and the line's first family cabins and solo cabins, all of which fit seamlessly into the HAL brand.

Get Koningsdam price drops
250,000+ people have entered their email

Somehow the designers have pulled off a remarkable feat, creating a ship that's different from the line's older vessels but still feels familiar to past passengers. With this mix, Holland America fans will certainly be pleased with the new ship, while a new generation of cruisers -- who expect more choice in dining, variety in entertainment and a modern look, feel and atmosphere -- have plenty of reasons to take a chance on Koningsdam.

Your typical passenger on Koningsdam will vary depending on where the ship is based. When it sails from Amsterdam, passengers will skew toward European, but with Americans and Australians making up a sizable chunk. When the ship is based in Fort Lauderdale, expect the majority of passengers to be North American.

Holland America has a reputation for attracting more mature passengers (65-plus), who are well traveled and well off, but the average age drops during European and U.S. vacation periods. Families are expected to make a strong showing on Koningsdam. During the summer, expect as many as 300 kids onboard of varying ages -- which is a sizable chunk for HAL ships.

Announcements are in English and Dutch.

Daytime: The dress is resort casual during the day.

Evening: Holland America passengers like to dress up, certainly on formal nights, and there are two of those per seven-night cruise. A tux and a long gown are not obligatory, but you certainly would not be out of place with them. A jacket and tie and a cocktail dress or nice pantsuit would be regarded as the minimum. Outside of these times, men are requested to wear shirts and slacks for dinner, and for women, a dress or an elegant skirt with blouse -- though this is not always enforced.

Not permitted: Swimsuits and other pool wear, men's tank tops, shorts and distressed jeans are not allowed in any of the restaurants during the evening hours.

Find a Koningsdam Cruise from $299

Where does Holland America Koningsdam sail from?

Where does Holland America Koningsdam sail to?

How much does it cost to go on Holland America Koningsdam?

Cruising on the Koningsdam in September 2022 was a cruise that had been planned in 2019 and as a result of Covid 19, it kept getting moved.Read More
jpeter1936

This was my first trip on the Koningsdam and I have booked another for November. The bathroom had a walk in shower which I prefer.Read More
Proximo70

That is not the case on Koningsdam. The Ship: Koningsdam is in good condition. It is a newer ship of the Pinnacle Class, so it is one of HALs larger ships.Read More
Jammu2