Symphony of the Seas Review 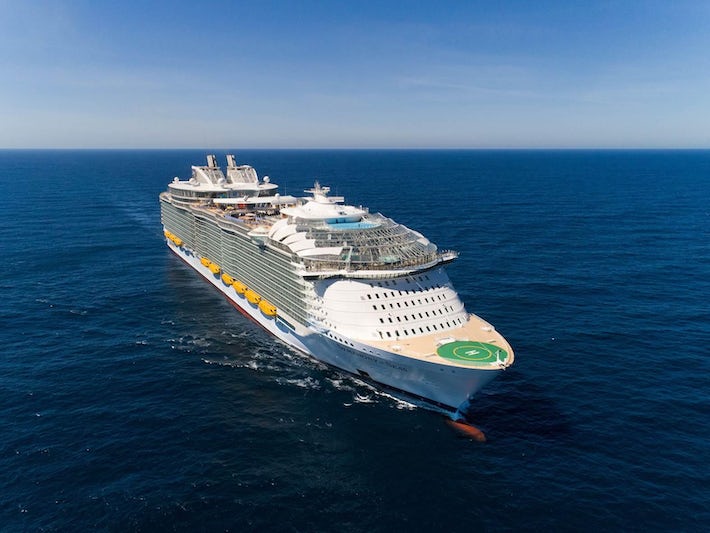 The objective is a bold one, but Symphony hits the mark in every category, which is due to a winning combination of variety and quality. The choice of which room to book, the restaurants to eat in, the activities to take part in or the shows to attend come out to a whopping amount of options for the average, weeklong cruise. Yet even if your family sticks to the basic cabins and included options, the cruising experience is still kept at a high standard, and attentive and friendly service is never the exception.

The reason Symphony of the Seas is its best ship yet, is because Royal Caribbean listened to feedback and kept the passenger experience top of mind when designing it. Complaints that ranged from the omission of a pool in the Solarium on Harmony of the Seas, to difficult-to-reach cabinetry in staterooms or no way to get omelets in the Windjammer Marketplace, have all been resolved on Symphony. Royal Caribbean has even brought back "Hairspray" by popular demand, giving the production a total refresh for a new (or returning) audience.

Symphony comes with all of the perks of big a mega-ship but nearly none of the pitfalls. Like other Oasis-class ships, Symphony of the Seas features the easily navigable neighborhood concept, which includes Central Park, Entertainment Place and the Boardwalk.

A brilliant passenger flow, plenty of signage and an intuitive sense of orientation means that despite being massive, it's hard to get lost for long onboard. Other byproducts of size, like pollution or waste, are offset by the line's Save the Waves program and by constant improvements to ship engineering. Symphony, like many of the line's ships, is "zero to landfill" meaning no waste is left behind. A new program has banned plastic straws and Symphony is actually 25 percent more energy-efficient than its fleetmate Allure of the Seas.

Despite having many of the same features as other ships in its class, Royal Caribbean was not afraid to go bigger with Symphony, adding new concepts like "Battle for Planet Z" laser tag; Hooked, a seafood restaurant; Playmakers, a sports bar and arcade; Sugar Beach, an expanded ice cream and sweets shop; and El Loco Fresh, a new Mexican eatery.

The strong execution of these fresh ventures, along with their mass appeal, almost guarantees that Royal Caribbean has ensured a new generation of fleetwide favorites. Even better, half of the new venues (laser tag and El Loco Fresh) are included in the cruise fare.

One downside to all the investment and improvement is that the returns have to come from somewhere. In the case of Symphony, the price of nearly every specialty restaurant cover has been raised. Though just a few dollars more per person than on previous ships, it could impact budgeting for families who can't spend hundreds more on dining in addition to what they paid to board the ship.

As if to say, "we got this," Royal Caribbean has traded in a number of partnerships to rely on their own in-house talent on Symphony of the Seas. This includes no more affiliation with Michael Schwartz in 150 Central Park, and also no DreamWorks characters. (The line still offers its DreamWorks partnership on other ships.)

Instead, the line has developed its own original parade production for the Royal Promenade, and poured heart and soul into an all-new stage production called "Flight: Dare to Dream." In venues like Studio B and the AquaTheater, Royal Caribbean turned to the performers for help, and as a result, each space has a new show developed and inspired by the talent.

Other efforts to attract fun-loving family cruisers include the one-of-a-kind Ultimate Family Suite. While calling it a "gimmick" is too harsh, the over-the-top stateroom is an extremely limited and very high-priced option for families or groups. (Still, that doesn't mean it's not cool.) The word is the line is looking at developing a family-focused cabin category inspired by the Ultimate Family Suite, but priced lower.

While it's been said time and again that Symphony of the Seas is bigger than its fleetmates (by just about 1 percent), it's the focus on improvements rather than size that seems to have driven Royal Caribbean to innovate on its already-winning formula for a family vacation experience.

Symphony of the Seas requires all cruisers at least 12 years old to be fully vaccinated, in accordance with CDC guidelines. Children 2 to 11 don’t need to be vaccinated; however, they will need to take a PCR test upon check-in and another (antigen) test if the itinerary is longer than five days.

Royal Caribbean tests are given at no additional charge.

All passengers, except those under two, must take a pre-cruise COVID-19 test in order to show a negative result. For adults 12 and over, this test should be administered no more than two days before departure. Kids 2 to 11 need to be tested no more than three days prior, as long as their test is not on embarkation day.

Children 2 and younger do not require any testing.

Before Boarding
• Proof of full vaccination, with FDA- and World Health Organization-approved vaccines (i.e. Pfizer, Moderna, AstraZeneca and Johnson & Johnson)
• Negative COVID-19 test result
• Arrival time for check-in must be chosen 30 days in advance, on the Royal App
• Check-in to be completed on the Royal App
• Health questionnaire (available on the Royal App)

Onboard
• Masks required at all indoor public spaces and while visiting ports that require them
• Symphony of the Seas sailing at limited capacity
• Physical distancing enforced throughout ship, with signage
• Spaced out seating in dining, entertainment and activity venues
• Designated areas of main dining room for families with children

Off the Ship
• Fully vaccinated passengers may book a shore tour through the cruise line or independently, or choose to explore off ship freely.
• Families cruising with unvaccinated kids must book a Royal Caribbean excursion to go ashore, except at the line’s private island of Perfect Day at CocoCay.

The range of activities, restaurants and lounges make it a highly customizable ship

If you choose to indulge in specialty dining, you'll pay a premium

Because it has a little something for everyone, Symphony of the Seas attracts families of all kinds and people of all ages, with more children onboard during summertime and school breaks. You can expect to find a mix of many nationalities, but primarily an English-speaking passenger mix of North Americans and Brits.

Daytime: Casual. During the day you'll find everything from bathing suits (you'll need a coverup and shoes, though, to eat in the buffet) to jeans and tees.

Evening: Passengers tend to get a little more spiffed up at night with sundresses, khakis and button-up shirts or polos. There are two formal nights per seven-night sailing, and fashion choices on these nights vary widely, with passengers choosing to don anything from gowns and tuxes to pants suits or jackets and ties. You'll also need to dress up for a few of the specialty restaurants like 150 Central Park.

Not permitted: Tank tops are not permitted for dinner, except in the Windjammer Marketplace buffet. Shorts are discouraged at dinner time, but you'll see people in them at the main dining room anyway.

Get Symphony of the Seas price drops
250,000+ people have entered their email

Find a Symphony of the Seas Cruise from $345

More about Royal Caribbean Symphony of the Seas

Where does Royal Caribbean Symphony of the Seas sail from?

Royal Caribbean Symphony of the Seas departs from Rome, Civitavecchia, Barcelona, and Miami

Where does Royal Caribbean Symphony of the Seas sail to?

How much does it cost to go on Royal Caribbean Symphony of the Seas?

Cruises on Royal Caribbean Symphony of the Seas start from $345 per person.

Is Royal Caribbean Symphony of the Seas a good ship to cruise on?

This was a surprise for 3 of my friends onboard the Symphony of the Seas. First time cruising for one friend, 2 for another, 6th for another and 30+ for me. We LOVED the shows.Read More
catcrazy22

Supposed to have been July of 2020. Due to COVID, was postponed 5 times on 5 different ships. Finally sailed on Symphony of the Seas 8/21/21. Overall, a very good experience.Read More
rbs1040

We specifically avoided the Windjammer for this reason. All in all I feel we are ready for a ship that is more itinerary based rather than all of the activities that Symphony offers.Read More
AdellaBlanche

The strings hang down and will dip into your food, so bring a scissors to trim it. We tried to knot them but the knots won't hold with the type of fabric it's made of.Read More
GM1999