Harmony of the Seas Activities 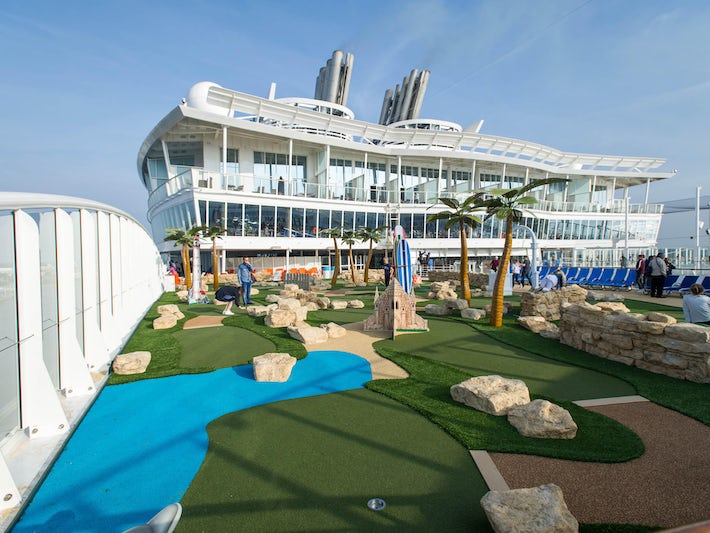 Day & Night on Harmony of the Seas

Harmony of the Seas is a busy, noisy ship, with lots going on day and night. During the day, the action centers on the Royal Promenade, a busy thoroughfare for shopping, eating and the odd "event," such as a sale. This spills out onto the Boardwalk, where you'll find the Carousel and the shops flanking it.

Daytime activities might include, but are not limited to, trivia and trivia-like games, bingo, pub games, dance classes, sports competitions, art auctions, cooking demos, and spa and shop seminars. Ice skating is also open to passengers at Studio B during various times throughout the cruise.

The ship really comes alive at night, when everyone is decked out for dinner and enjoying the electric atmosphere. It's also when it might feel the most crowded, as people compete for limited space at the blockbuster events, especially those on the Royal Promenade.

At night, the bars are all about being loud, offering entertainment and keeping you dancing and singing along late into the night. However, because of the innovative neighborhood concept (which separates areas), it's quite possible to escape the crowds and enjoy, for example, piped birdsong and classical music in Central Park, the most sophisticated and upscale area of the ship.

The theater, where you'll find the big productions including "Grease," is magnificent -- and huge -- with seating for 1,380 passengers and with a giant movie screen flanking each side.

The ship's casino is located midship on Deck 4. The casino includes a huge number of slot machines, along with table games like blackjack, craps and roulette. It hosts tournaments throughout the cruise and has a sports book, poker room and bar.

Catch late-night adult comedy shows at the Attic on Deck 4. Late into the night, it occasionally hosts music and dancing as well. The best spot for music is Jazz on 4 (Deck 4). This cool venue just oozes mellow vibes and fantastic live jazz. No reservations necessary, but dancing and music starts late and goes later.

Harmony of the Seas Outside Recreation

There's so much to do on the outer decks of Harmony of the Seas, that it's sometimes hard to know where to start. But if you do nothing else onboard, try the Ultimate Abyss.

Even visually, it's a showstopper, with the entrance -- high up on Deck 15 -- designed to look like a giant angler fish. The Abyss has two slides, and riders will fly, at breathtaking speeds, down 10 stories atop mats (that add speed and eliminate friction burns). It's a blast and open to anyone at least 44 inches tall. The ride lasts 12 seconds, long enough to get your heart racing without time to be truly terrifying.

Adrenalin junkies also will adore the ship's zipline, which offers a seven-second ride from Deck 16 to Deck 15 over the wide-open space above the Boardwalk.

Most popular with the kids is Splashaway Bay with its water cannons, a multilevel jungle gym and a drenching water bucket, two covered hot tubs and a lazy river feature.

Virtually all of the middle of Deck 16 serves as a sun deck on Harmony of the Seas, with lots of lounge chairs and little shade.

Harmony of the Seas Bars and Lounges

There are 14 bars aboard Harmony of the Seas, most of them featuring various forms of entertainment, such as live music or DJs.
Highlights include:

Boleros (Deck 5): This Latin-style lounge, located on the Promenade, features live music and dancing late into the night. The bar -- and its dance floor -- really gets going after showtime.

Boot & Bonnet Pub (Deck 5): The best spot for a pint onboard, the Boot & Bonnet is an English-style pub located on the Promenade. This is where you'll find the best variety of beers from around the world; the menu even has a beer-style guide (English Ale, Tripel and IPA, for example) to help novices make decisions. An acoustic guitarist provides the entertainment at night.

Rising Tide Bar (Deck 5 through 7): Worth trying once, this bar is more like an elevator with a bar than a place to hang out. It moves between the Promenade Deck and Central Park, a three-deck ride. Rising Tide ride times are listed at the bar's entrances, and it usually offers a number of trips each night.

Bionic Bar (Deck 5): Two robot bartenders make your drink (cocktails only) after you punch in your order via tablets. Watch as these bionic arms shake up your cocktail. Because the robots can make only two drinks at once, it could take a little while to get your drink, but the novelty of it is a lot of fun (at least the first time).

Schooner Bar (Deck 6): The nautically themed Schooner piano bar looks over the Royal Promenade and usually is quite busy. When music from the Promenade doesn't filter in, a pianist/vocalist entertains.

Vintages (Deck 8): A true wine bar, Vintages is located in Central Park. It features a large, tall table that can be used for wine tastings, offered several times a cruise for a fee, as well as smaller, more intimate tables and a bar, as well as a number of outside tables. You can also order nibbles from Jamie's Italian here for a fee.

Dazzles (Decks 8 and 9): This two-deck nightclub has live music and dancing every day. The top-deck is great for watching rather than participating; it overlooks the dance floor and small stage on Deck 8. Wait staff serve both levels. Dazzles stays open late, and getting a table can be tricky, but if you've got your dance shoes on, you won't need one.

Solarium Bar (Deck 16): The Solarium Bar serves passengers using the adults-only space. Because it's the only bar in the area, it's fairly busy, but it's a nice spot to grab a drink pre-dinner.

Spa on Harmony of the Seas

Massages start at around $119 for a 50-minute Swedish massage, while facials begin at $125. Haircuts start at $59 and manicures begin at $45. Daily specials are available -- check your Cruise Compass. Passengers who buy multiple treatments will save; book three and you get 10 percent off the first, 20 percent off the second and 30 percent off the third. An 18 percent gratuity is added to all spa and salon services.

Fitness on Harmony of the Seas

The fitness center offers a wide variety of cardio equipment, including stair-climbers, treadmills, ellipticals and stationary bikes, along with a free weight area and a number of weight machines. All equipment is from Life Fitness, and the cardio machines have USB and headphone jacks so you can listen to your own music while training.

The fitness center includes a cycling room, where spinning classes take place, as well as an aerobics room, which hosts group classes like TRX and lectures. The variety of equipment in the fitness center is decent, and it's rarely busy, even at peak times. Most classes cost extra, as does nutritional consultations and personal training.

A staircase in the gym leads directly to the jogging track, located on Deck 5. Points along the two-lane track mark different common race lengths (5K, 10K, etc.), and 2.4 laps equals a mile.

With its colorful, comfortable and hip kids and teen spaces, and exhaustive selection of kid-friendly activities, Harmony of the Seas has plenty to keep the under-18 segment entertained. Plus, with a number of cabins that sleep six as well as family-specific suites, it's ideal for families.

It's not just about the volume of options, which Harmony of the Seas has covered. It's the quality, as well. The attention to detail when it comes to family spaces, accommodations and programming sets Harmony apart from other ships out there.

Kids and Adventure Ocean on Harmony of the Seas

The kids club Adventure Ocean is included in your cruise fare. Kids fit into one of three groups here: Aquanauts (3 to 5 years old), Explorers (6–8) or Voyagers (9–11). All must be signed into and out of the club by a parent or guardian.

Aquanauts slide down the venue's bright plastic slide, play group games and participate in face painting or story time. Explorers might take part in a pirate parade or play age-appropriate games on the ship's Xboxes, while Voyagers participate in talent or sports contests, play board or Xbox games or simply chill and chat on beanbags or cushioned stools.

Children in all groups can visit the Adventure Science area, where staff work with them on cool experiments. Or, they can get creative in the Imagination Studio, stocked with arts and crafts supplies. A small theater is also available for all ages; here, kids -- and their parents, if they choose to join -- can watch movies, as well as puppet shows.

The youngest group, age 6 months to 3 years, make the Royal Babies and Tots nursery their home onboard. For $10 an hour, per child, parents can leave their wee ones with the fully vetted child care staff onboard. The space has a number of soft play areas as well as cribs. Staff members will change diapers when needed.

Packages that include diapers, baby wipes and food can be purchased ahead of time and delivered to your cabin for use during the cruise. Baby and tot care is available until around midnight each night.

Teens on Harmony of the Seas

Royal Caribbean divides teens into two groups: ages 12 to 14 and 15 to 17. For both groups, it's pretty much about hanging out. The teen spaces include The Living Room, for chilling and playing Xbox; a video arcade; and Fuel, a dance club that stays open until 2 a.m. All teen facilities are located on Deck 15. Staff are assigned to the teen spaces and are always present, though usually in the background rather than organizing activities. Teens can come and go as they wish.

When there are organized activities, they tend to be things like basketball tournaments, scavenger hunts and rock wall climbing sessions. Activities give teens a sense of freedom and fun, without making them feel like kids.

Find a Harmony of the Seas Cruise from $273