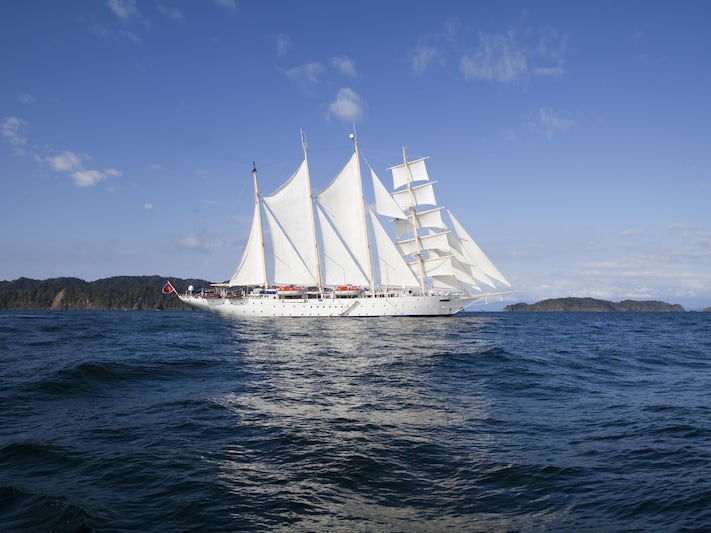 No one would ever accuse Star Clipper of being a "floating hotel." Instead, it's a sleek clipper ship, carrying only 170 passengers and powered by prevailing winds -- with a backup motor and generator to provide creature comforts. Everything about Star Clipper is nautical, from the astonishing web of lines that work the 16 billowing sails to the framed prints adorning its cabins, and from the varnished mahogany woodwork and brass-fitted portholes to the striped jerseys the crew sports.

That's all because Star Clipper was built to fulfill company owner Mikael Krafft's vision of recreating the golden age of clipper ships. His ships aim to offer the romance of the sea, coupled with a cushier trip than our seafaring ancestors enjoyed.

Where does Star Clippers fit amid the small number of cruise lines flaunting canvas? It has more amenities than a windjammer-type experience, where you might be expected to heave-ho on the ropes, but less luxury than the near-legendary Sea Cloud ships. It's a more authentic tall ship experience than Windstar's cruise ships with computer-manned sails but, in exchange, Star Clipper's cabins are smaller and the food far more limited.

The focus for a Star Clipper vacation is sun and fun, with many stops at lesser-touched ports, where the sports staff deploys a collection of water toys. Star Clipper also hosts a full complement of diving and snorkeling equipment. Itineraries usually also include a few shore excursions, though depending on the itinerary, many guests elect to explore on their own, so those tours might be canceled due to lack of interest.

You need to be a particular type of passenger to appreciate this ship, and, chances are, you will either love the experience or be a bit disappointed that you were less coddled and had to "rough it" more than you expected. Star Clipper demands agility. You'll find stairs to climb and ropes to sidestep, and most shore calls involve climbs down a steep stairway into a bobbing tender. Some landings are "wet," meaning you'll have to descend a ladder on the tender's bow into a couple of feet of water.

Star Clipper doesn't have stabilizers and can heel-over under sail, as well, giving your cabin floor a slight funhouse tilt. There are no elevators, so this is not a cruise for anyone who has physical limitations.

If all that sounds exciting and adventurous rather than intimidating, Star Clipper is for you. You'll likely enjoy clambering up to the crow's nest (secured in a safety harness), donning an eye patch for Pirate Night and grabbing the mic during the talent show. Truth be told, it's a bit like seafaring summer camp for adults. This is the sort of cruise where you unwind and start seeing the world at a slower pace -- where sunsets are more magnificent and the stars brighter than you've ever noticed before.

What is Included in a Star Clipper Cruise?

Star Clipper isn't an "all-inclusive" ship, by any means. You even have to buy your own bubbly at the "Champagne Sail Away Party." That said, prices for drinks, shore excursions and other extras are reasonable. You will receive a welcome plate of cookies and fruit, as well as one complimentary bottle of water in your cabin per cruise.

Gratuities aren't included either, and the line recommends tips of 5 euros per person, per day, for the wait staff and 3 euros per person, per day, for cabin stewards. These can be added onto your bill, or you can drop them off in cash at the purser's office. Because gratuities are meant to be pooled among the cabin stewards and dining room staff, individual tipping is discouraged. Tipping of shore excursion guides and drivers is at passengers' discretion but always appreciated.

All meals are included, as is use of the water toys, both from the ship and while at select ports. You won't have to pay extra fun activities like climbing the mast or working the ropes, either.

Internet isn't included, and it's slow at best and somewhat pricey. Star Clipper remains one of the few ships in which internet is sold by the hour rather than as part of a package. You'll also pay extra for massages, though we found the fee to be very reasonable.

Star Clipper attracts a mix of age ranges from low 30s through retirees. What links the passengers is not a particular age but rather a sense of adventure and, especially for the honeymooners onboard, the romance of being on a tall ship under sail power. And, although you'll find plenty of gray hair among the passengers, most are nimble enough to navigate boarding tenders and hopping off into the water for a wet landing. Same sex couples are common. Families with older children, mostly teens, will sail during the summer and holiday periods, but young kids are few and far between.

Star Clipper is a bit of a mini-United Nations, with a strong international mix of guests. Most common might be German and other Europeans. Americans are often in the minority, but English is the ship's lingua franca. Announcements, though, and instructions are made in German and French, as well. That can make things tedious during safety drills or briefings.

On the brighter side, if you enjoy rubbing shoulders with folks from around the world (and maybe even practicing your high school French), the polyglot passenger list more than makes up for that slight annoyance. Guests tend to stick with people from their country, especially in the beginning, due to the common language and cultural similarities. The international crowd can mean there are more smokers than you might typically find on an American-dominated ship, and you'll likely catch a whiff of smoke when passing through the designated smoking areas at the outdoor bar or upper deck. (Or other outdoor areas; the smoking policy isn't strictly enforced on the ship's outer decks.) There's no smoking allowed in any indoor locations, though.

Dress code is very casual, though some passengers tend more toward "casual elegance" in the evenings. It's requested that men wear long trousers in the dining room. "No flip-flops or sandals" in the dining room is another request that isn't strictly enforced.

Some passengers choose to dress a bit more formally for the captain's dinner night, but for a few men that simply meant donning a sport jacket over an open-collared shirt. One evening is designated "pirate night," when the serving and entertainment crew sport dastardly moustaches, eye patches and fake cutlasses. A few passengers tend to join in by tying sashes around their waists or heads, but no one on our cruise went "full parrot." The ship also will have a "white night" in which guests dress in white and watch a light show set against the ship's cream sails.

Bring a good sun hat and umbrella. You also might want to consider a long-sleeved swim shirt to protect your back when snorkeling, as well as water shoes for wet landings.

An exciting and romantic sailing adventure in luxury......

We chose Star Clipper on recommendation of our independent travel agent as being a great ship to go on for a first voyage. It surpassed our expectations and we shall certainly do another one.Read More
Hilarys

Star Clipper herself is becoming tired and in some areas is looking her age but you very quickly forget this as the experience gets better and better by the day.Read More
Rogersonaj

For us it was interesting and had its good moments with some great scenery in the Andaman Sea, but was spoiled by a very noisy cabin (due to the ship's generator running 24/7), and an overall lack of personal space.We will not repeat the experience, as we prefer a private balcony cabin and an evening buffet meal option.Read More
mtl3108

So, overall an excellent trip and we will certainly do the Star Clipper ships again on different routes.Read More
myrabenson