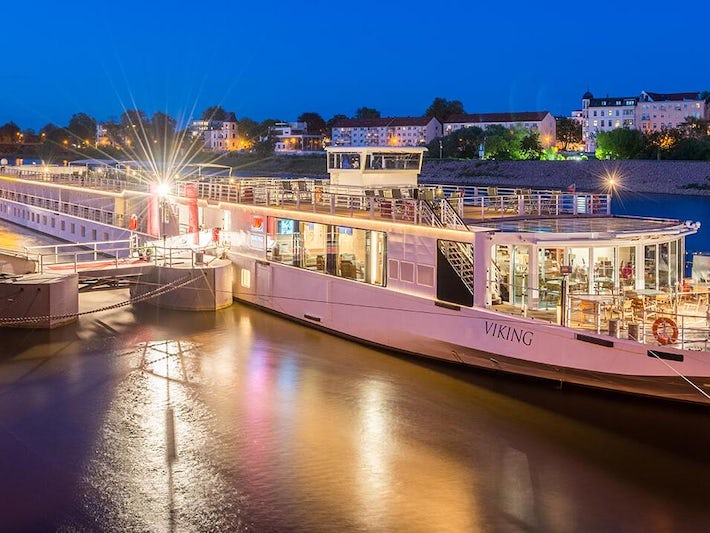 Purposely built and designed to sail on the notoriously shallow Elbe River between Prague and Berlin, Viking Astrild is dubbed a "baby Longship" because it's about half the size of the 190-passenger Viking Longships. Design-wise, though, you won't notice much of a difference on this smaller 98-passenger version of a Longship. The decor is Nordic-influenced, with sleek and stylish interiors. The fleet's signature Aquavit Terrace offers indoor/outdoor dining and on-deck barbecues, and the sun deck is outfitted with plenty of loungers, dining setups and shade-bearing canvas awnings to make it a perfect place to spend a sunny day.

This sleek, intimate ship draws well-traveled passengers who wish to explore destinations on the Elbe River.

Despite the ship's ultra-shallow draft, extremely low water levels on the Elbe could disrupt your itinerary.

It's an excellent choice if you want to sail the Elbe on a new riverboat.

You will notice some changes. There are just two indoor decks on Viking Astrild, instead of three. The set up means that, interestingly, passengers on the first level get big picture windows in their cabins (on traditional Longships these rooms have windows set up high on the wall). The lobby and atrium area is more compact on this vessel, though there was always plenty of room in the Observation Lounge. And Viking Astrild does not have the aft Explorer suite category.

There are other differences you probably won't notice -- but should! Because the Elbe River is so shallow, Viking Astrild (and identical sister ship Viking Beyla) received mechanical innovations over Viking Schumann and Viking Fontane, the line's existing, and older pair of ships on the Elbe. These ships have pump jets for propulsion, which allow them to sail at lower river levels (these are not infallible, however, and during a period of great drought may not be enough to maneuver the ships). The ship designer used lighter materials, such as aluminum instead of steel, to improve the draft and swapped in composite materials to replace steel and wood. This attention to detail means the duo can navigate at water levels as low as 84 centimeters, 10 centimeters less than the traditional Longships. And because these baby Longships are lighter, they use less fuel -- some 20 to 30 percent less.

What we also noticed the most about sailing on Viking Astrild is that its smaller size means there's an even more intimate ambience onboard. The ship, the first new-build to be developed for the Elbe in many years, offered a contemporary, comfortable base for our explorations beyond the river. The superb and friendly crew and convivial group of well-traveled passengers made the trip an absolute delight.

Get Viking Astrild price drops
250,000+ people have entered their email

Viking's river cruises typically attract a 50-plus, well-traveled (by land and by sea) passenger and that held true for our cruise on Viking Astrild. Geographically, most hailed from North America, with a few from the U.K. and Australia.

By day, the dress code is casual -- passengers wear clothes that are comfortable for exploring in cities -- and also outdoors. Practical shoes are especially important as there are cobblestones and uneven surfaces. At night, the dress is country club casual. On all evenings aside from the Captain's Welcome when wear men don jackets (suits and ties not necessary), men wear collared shirts, blazers and khakis, and women wear cocktail outfits.

Where does Viking Astrild sail from?

Where does Viking Astrild sail to?

How much does it cost to go on Viking Astrild?

Our Viking Crew were excellent as usual. We enjoyed having local performers back on board as COVID protocols allow. We felt Viking and our Astrild Crew took care to ensure our heath and safety.Read More
CaptnHank

This was our third river cruise with Viking. We have also completed approximately 10 ocean cruises with other companies. Once again, Viking outdid themselves!Read More
marythekay

This was our second river cruise with Viking, and after experiencing the fantastic boats, staff and value, we would not book with any other firm.Read More
GlandwrWJ

Interesting beginning and end but somewhat boring in the middle.

This was our 3rd Viking river cruise and we found the food a little lacking.Read More
Floridaze1