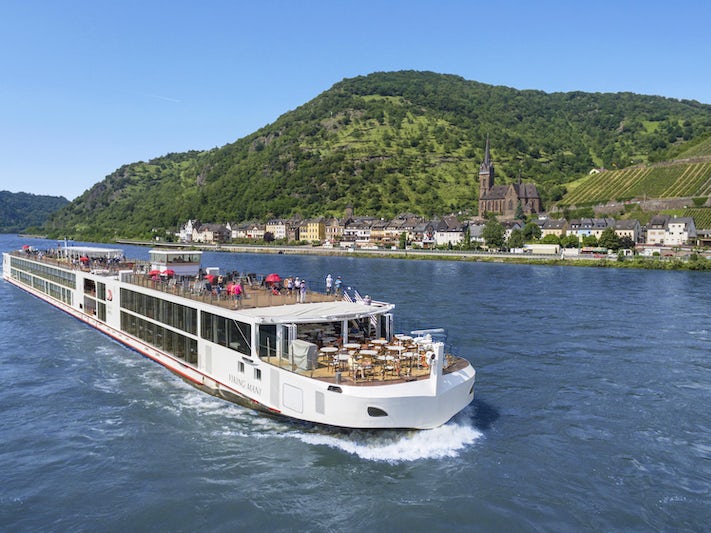 It's tough not to feel immediately at home onboard Viking Mani, one of Viking Cruises' notable Longships. It exudes a comfortably casual ambience, like a beloved summer house, rather than aiming for the glitz and wow factor of oceangoing mega-ships or the in-your-face period charm of some of the higher-end river cruises. The riverboat is decorated simply, in tones of beige, blue and cream. Glass is virtually everywhere, which allows in plenty of natural light. Natural wood makes up a big part of the decor, as well; our favorite such touch is in the main dining room, where a wall of woven wood gives the illusion of an old wooden Norse Viking ship. Fresh-cut flowers are found throughout. In fact, the only truly over-the-top touch is the artwork that sits atop the staircase of the atrium: a huge modern painting depicting a moon and a Viking amid a cacophony of colors. This painting is a nod to the Norse moon god, Mani, for which the ship is named. While all of Viking's Longships are virtually identical, the art on each is distinctly linked to the god tied to the name of the ship. On Mani, you'll also find other pieces of art related to the moon.

When booked to capacity, Viking Mani can hold 190 passengers, but it never feels crowded. The ship is smartly designed, with plenty of spaces indoors and out to spread out everyone onboard. With the Longships, Viking created even more room for passengers by blunting each riverboat's nose, a traditionally long, narrow and mostly unusable space. In doing so, it opened up more usable space and introduced the Aquavit Terrace, a company exclusive. (The line has patented the design.) The terrace is a fabulous area in which passengers can sit outdoors (among heat lamps, if necessary) and take in the serene shoreline. It flows into indoor seating, separated by glass doors that can be closed when the weather is chilly or wet. The eatery is a great casual spot for lunch or dinner if you want to a relaxed meal in a spectacular setting.

Viking knows its audience well, and the culture onboard Viking Mani reflects that. While there's nothing wrong with a truly international experience in which passengers of all backgrounds mingle with one another, Viking caters primarily to English-speaking travelers. That means the experience onboard is uniquely American and feels familiar -- and comfortable -- to those from the United States and Canada. Food has a bit of an international flair but is not so out of the box that passengers won't recognize it. All crewmembers speak English in addition to their native tongues, and they speak it well. (They're even great with our American brand of small talk and jokes.)

The crew onboard Viking Mani were exceptional during our cruise; they quickly learned the details of all the passengers onboard, greeting them by name and quickly identifying their cabin numbers without even asking. Service in the restaurants is quick without being rushed and accommodating without being intrusive. Thoughtful touches, like bottled water handed out as passengers head to port and cool (lemon-scented!) towels when they return, make the experience feel even more special.

Get Viking Mani price drops
250,000+ people have entered their email

Travelers from North America, the U.K., Australia and New Zealand make up most of Viking's passenger base. The general age for river cruise passengers is 60 and older, but Mani and other Longships, with their contemporary design, were built with an eye toward attracting a slightly younger traveler. Regardless of age, passengers tend to be well traveled (though many are visiting Europe for the first time).

Casual, comfortable attire is encouraged for both ship and shore on Viking Longships. The must-pack item is, without question, a comfortable pair of walking shoes for shore tours. As the ship sails in Europe, with its lovely and historic landscapes, tours frequently involve cobblestones and other uneven surfaces. The staff and the daily program provide ample notice when this is the case. Shorts during the summer and jeans year-round are the norm for both men and women. Layers are key in the fall and spring, when weather can change quickly. A raincoat will keep you dry in port.

Generally, passengers "dress up" to varying degrees in the evenings but never to the level of a big-ship formal night. Most don the kind of attire worn at a nice restaurant on land, but others don't bother to change from their sensible shore excursion gear. Save your best outfits (maybe casual dresses for women and collared shirts and blazers for men) for events like the captain's welcome and farewell dinners.

Where does Viking Mani sail from?

Where does Viking Mani sail to?

How much does it cost to go on Viking Mani?

A relaxing and educational cruise

My wife and I, and two friends chose this cruise because we wanted the experience of a river cruise on a small, intimate ship as our first cruise.Whether it’s your first cruise or you are a seasoned traveler.Read More
Joe131

We have continuously raved about our experience on the Mani to all of our friends and aquantences. Viking has a great reputation and does not take it lightly.Read More
Tim Israels

We have done two tours now with Viking on the Mani Rhine River and the Tor Danube River. Both trips were excellent and the Staff well trained and helpful. We’d recommend Viking cruises to everyone!Read More
Bmadison219

After having sailed the Seine River with Viking, we knew immediately we were booking another river cruise with Viking! After much research, we chose the Rhine.Read More
dcteal