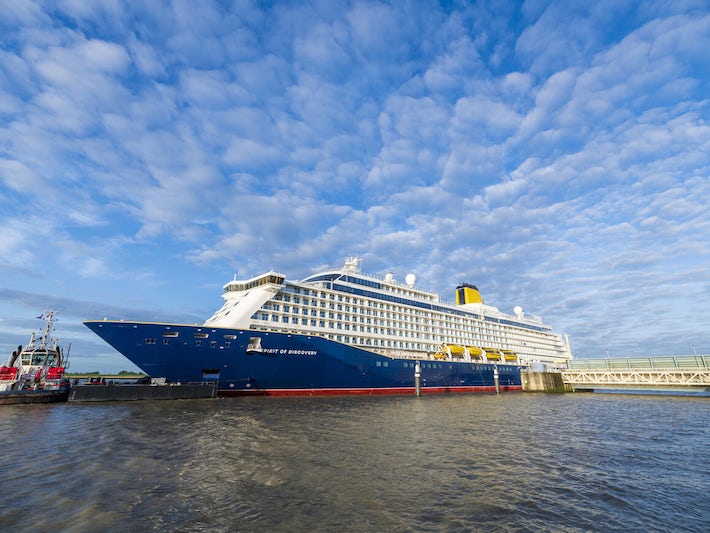 Five years in the planning, the 58,250-ton Spirit of Discovery is Saga Cruises’ first new build. The line’s mission was to create a luxurious, "boutique" ship for British cruisers, with a balcony for every guest and interiors inspired by hotel design.

This is exactly what it’s done. Spirit of Discovery oozes class and, in many aspects, does feel more like a hotel than a cruise ship. There’s a real sense of space in the elegant cabins, the wide corridors and the light-filled lounges. The exterior is smart-looking, too, with a navy hull and jaunty yellow funnel and lifeboats.

Saga commissioned one design firm, SMC Design, to do all the interiors, which has paid off as there’s a pleasing theme of continuity onboard rather than a hotchpotch of different ideas, which can jar on some cruise ships. You’ll find nothing garish, no phony themes and no gimmicks. Everything from the fabrics used to the 1,000-piece, £1million, art collection is a gentle celebration of things British.

There’s a wonderful sense of nostalgia in some of Spirit of Discovery’s offerings, from the old-fashioned jars of liquorice and rum-and-butter boiled sweets lined up on the Lido Deck to the classic prawn cocktails on the menu. Factor in some of the guest entertainers -- DJs and TV stars from the 1970s, for example -- and, assuming you’re in the line’s target age range, you’re catapulted back through the decades and bathed in warm memories of youth.

There are a few niggles, some of which can be put down to teething problems. Service was pretty shaky in places on the maiden voyage, but there was clearly plenty of crew training going on. Passengers weren’t behaving in the way they had been predicted to, so although the ship has enough covers for everybody to eat at once, there was a rush for the Grand Dining Room at 6.45 p.m. every evening, when the restaurants opened, with queues forming. Entertainment had to be rescheduled quickly to distract people from early dining and ease the pressure. The same happened at breakfast, with overcrowding in The Grill, but plenty of space in the Grand Dining Room.

Finding your way through the deck naming system takes some getting used to, as well; some decks have names and letters, so A, B, C, D and E, as well as Main Deck, Promenade Deck, Lido Deck, Sun Deck and Observation Deck, rather than numbers. Of the lettered decks, A deck is the highest and E the lowest. If you’re trying to count the decks in your mind while trying to decide whether to take the stairs of wait for the lift, sometimes it’s easier to visualise them as numbers, E being deck 7, D deck 8 and so on.

Overall, though, Spirit of Discovery is a joy to sail on; soothing rather than cutting edge, and chic rather than flashy. The quality of the ship and the fact that so much is included makes Saga a serious competitor now to lines like Oceania Cruises, Viking Ocean and Azamara.

Spirit of Discovery is not for party people, gamblers, fitness freaks or shopping addicts -- but the ship should serve Saga well, with plenty of appeal to Gen-Xers as they sail into their 50s and into the cruise line’s sights.

Lack of online or telephone booking for speciality dining

An elegant and comfortable mid-sized ship, packed with thoughtful touches and establishing Saga firmly in the premium cruise sector

You need to be over 50 to book a Saga cruise, although companions of 40-plus are allowed. The reality is that most passengers are well over 65 and, on cruises that attract a lot of repeaters, older still. The crew are selected for their ability to empathise with mature customers and everything is carefully designed to appeal to this age group, from the included taxi to the port to the onboard entertainment.

The vast majority of Saga’s passengers are British, well-travelled, fiercely loyal to Saga and sociable; there’s a chatty, friendly vibe on board. You may also encounter a few North American and Australian guests, although the ship really is geared to British tastes. Some 20 percent of the cabins are reserved for singles, so you will encounter a lot of solo travellers. There are hosted tables for singles every night and get-togethers where singles who want a companion on excursions are encouraged to buddy up.

Because of the age group, many passengers have mobility issues and shore excursions are extremely gentle, with descriptions spelling out exactly how much walking or how many steps are involved.

Daytime: Casual and comfortable; jeans, T-shirts and shorts are all fine, although it is expected that sunbathers will cover up swimwear when eating at the buffet at lunchtimes.

Evening: Either smart casual – open-necked shirts and smart trousers for men, and for women, anything you might wear to a good restaurant at home. There are usually two formal nights per week, which are fairly strict: tuxedo or dark suit for men, long dress or cocktail dress for women. This applies in all public rooms, including the buffet, from 6 p.m. There are occasional loose themes, like a White Night party.

Not permitted: Jeans, shorts and T-shirts anywhere on the ship after 6 p.m., regardless of the day’s dress code.

Gratuities are included in the cruise fare and are not expected. This includes tips for treatments in the spa and bar drinks; there’s no markup. Some passengers tip guides and coach drivers, but again, this is not expected.

The cruise was called "A Taste Of The Continent". My husband and I have enjoyed another wonderful cruise on the Spirit Of Discovery. This was our 5th cruise on this lovely ship.Read More
Anwil

Spirit of Discovery is a very impressive ship where everything worked (apart from annoying soot from the funnel!) but what about the itinerary?Read More
AdeAfloat

The welcome on board the Spirit of Discovery was friendly, efficient and we were in our cabin within minutes.Read More
twotravellersLondon

Whereas Viking is smart, contemporary and bright with lots of vibrant art, the Spirit of Discovery is brown and beige and hasn’t enough colour.Read More
Captain Povey