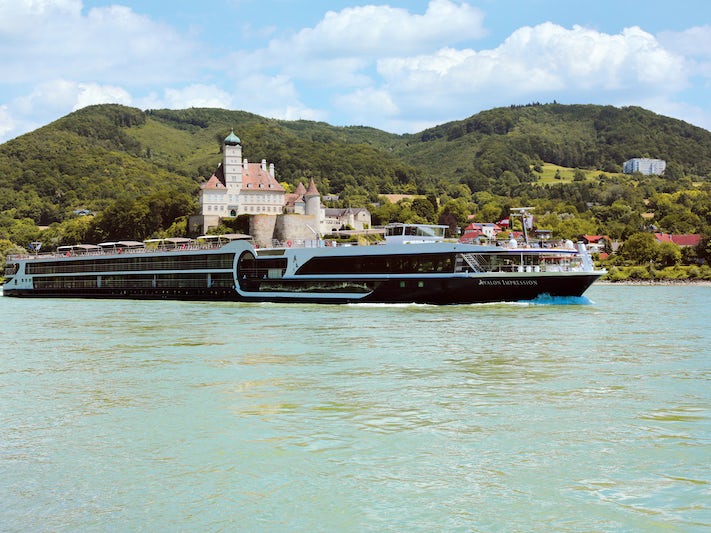 Avalon Waterways continues to grow with the launch of sister ships Avalon Illumination and Avalon Impression. With the smaller ship Avalon Poetry II, also launched in 2014, there are now eight vessels in its European Fleet.

Avalon Impression has 83 cabins -- 65 Panorama Suites, 16 Deluxe Staterooms and 2 Royal Suites -- across six categories. The majority of cabins measure 200 square feet and have queen-sized beds that can be configured as twins. There are king-sized beds in the two 300-square-foot Royal Suites. Cabins on the lower Indigo Deck have fixed high-level windows, and all the other suites on the Sapphire and Royal Decks have the aforementioned French balconies.

The ship has three lounges, with the covered Sky Lounge situated forward on the Sky Deck; the larger Panorama Lounge, with a bar, in the same position on the Royal Deck; and the smaller, quieter Club Lounge located aft on the Royal Deck. There is also a whirlpool and games area on the Sun Deck. Other onboard amenities include a fitness center, Internet room, hair salon and elevator.

Dining options aboard the vessel are the main restaurant on the Sapphire Deck, which operates an open-seating system, and the indoor Panorama Bistro, which serves lighter meals on the Sky Deck. In addition, lunch is served in the alfresco Sky Bistro during summer. Complimentary wine, beer and soft drinks are served with lunch and dinner. There is also a free 24-hour tea and coffee station.

Avalon Impression will sail on a selection of itineraries on the Seine, Rhine, Main, Rhone, Saone and Dutch waterways, which range from seven to 15 nights. Fares include guided excursions, all onboard gratuities and a complimentary door-to-door home pickup service for U.K. mainland passengers living within 75 miles of their chosen international airport or Eurostar terminal. For people who live more than 75 miles away, the service is available at a supplementary cost.

Get Avalon Impression price drops
250,000+ people have entered their email

Find an Avalon Impression Cruise from $1,104