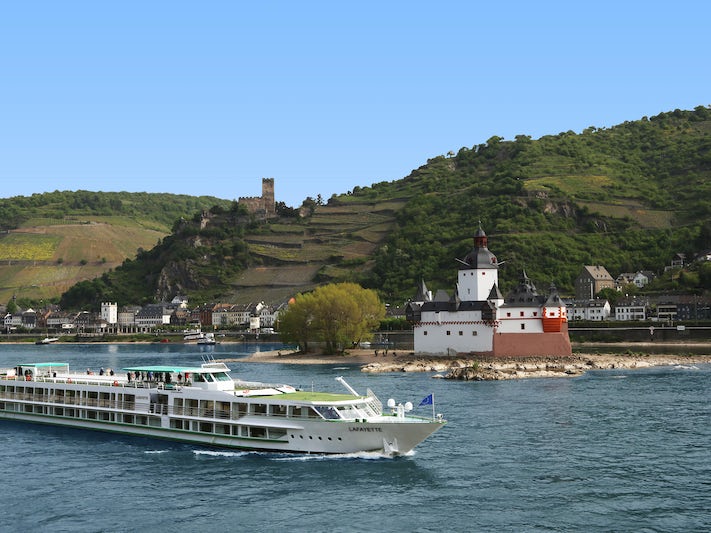 Lafayette, launched in April 2014, is a sleek and stylish vessel and a departure from CroisiEurope's usual style in that its 84-passenger capacity is lower than the usual 100 to 180 range. At 295 feet, the ship is only slightly shorter than the line's other riverboats so Lafayette offers its fewer passengers a spacious and gracious environment.

The white-and-silver decor in Lafayette's public rooms, complete with charming glass bubble chandeliers, is pretty indeed, and it's more understated and sophisticated than that on the more brightly colored vessels owned by the France-based company.

Lafayette is also the first CroisiEurope vessel to have full floor-to-ceiling windows in every cabin, with beds placed opposite for maximum enjoyment of rolling views as you snooze.

Add to that a young, energetic and friendly crew, varied European cuisine with a distinctly Gallic twist and free onboard drinks, and you have a recipe for a quite enjoyable eight-night cruise along the Rhine, as Lafayette plies its way from Amsterdam to Basel and back.

Get Lafayette price drops
250,000+ people have entered their email

As one of Europe's biggest riverboat operators, CroisEurope is well known throughout France, Germany, Spain and increasingly the U.K. On our late July sailing, our fellow passengers were predominantly French, with Spanish and English (or English-speaking) travelers making up roughly one-third of the total passenger complement.

Multilingual onboard announcements were tailored to the nationalities of the passengers, with front desk staff all fluent in French, English, Spanish and German.

Although the nationality mix varies from sailing to sailing with French predominating, CroisiEurope has gone beyond its original mainland European passenger base to attract growing numbers of English-speakers.

It has achieved this by promoting itself more in the U.S. and Australia and by linking with U.K. tour operators and charter companies. (In 2015, for example, several of Lafayette's sailings will be chartered by U.K. tour operator Noble Caledonia.)

I shared a dining table with a British and an Australian couple (who had come all the way from Adelaide for the Rhine trip). Both couples were, like many of the other passengers, in their late sixties or early seventies, but the conversations at dinner -- and the dancing after it -- were lively.

There was one gala evening to give passengers a chance to put on their glad rags, but no dress code is specified, and black ties were certainly not required. Generally speaking, passengers wear casual clothing ashore and change into slightly smarter clothes in the evening.

Where does CroisiEurope Lafayette sail from?

Where does CroisiEurope Lafayette sail to?

How much does it cost to go on CroisiEurope Lafayette?

So we took her advice, booked the Lafayette, and now share her enthusiasm! We were thrilled with our intimate cruise aboard the Lafayette.Read More
smart_travel

Fluvial cruises are a wonderful experience!

The average quality vs price was good but inferior than in previous cruises in same company.Good organization of the space in the cabin with more closets.Read More
Madebui

I have so many great things to say about this cruise I don't even know where to begin!The food in the dining room had great presentation, it was also very delicious.Read More
anng411

Cruising down the Rhine

The small size, with about 80 passengers, was just right: Most of the passengers were French, Spanish, Norwegian, British and then just the 8 of us Americans, and we enjoyed some of the evening entertainment which were friendly competitions with the others on the ship.I thought that the french meals and wines were lovely and there was plenty of food.Read More
barbyw