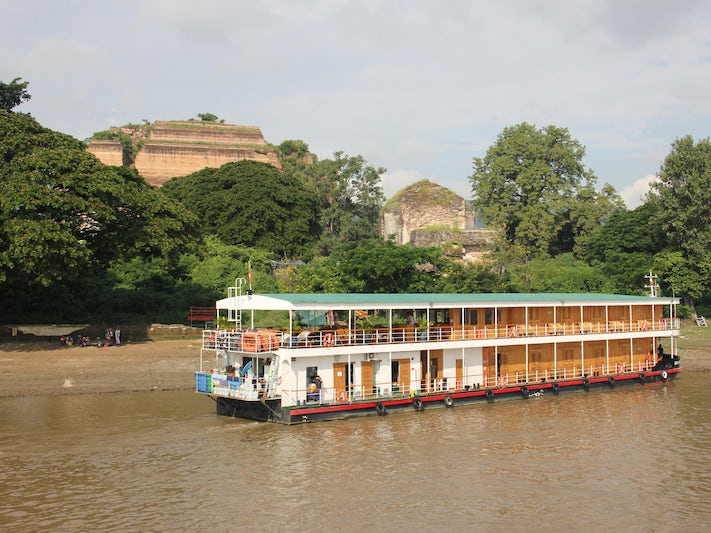 Kha Byoo Pandaw, starting service early 2015, will be a shallow-draft design to allow access from Mandalay to Bhamo, the most northern navigable point of the Irrawaddy, close to the China border. The route takes in Katha, where George Orwell lived and wrote Burmese Days.

The ship will have two walk-around passenger decks. The upper will have three cabins of 170 square feet and one premium cabin. Main deck will have six cabins. All will have twin beds (although some convert), air-conditioning and French windows. Cabins will provide desks and safes, as well as bathrobes, hair dryers and slippers in the bathrooms. There will be an onboard laundry and crew to clean shoes after excursions.

Like similar ships in the fleet, passengers will be able to spend their leisure time on the aft section of the covered upper deck, where they can take in the sights from teak loungers and wicker furniture. This deck also will have a small covered deck forward.

Meals will be served bistro-style outdoor or indoor on the upper deck, the former a pleasant alfresco experience that will afford backdrops such as floodlit golden stupas, passing vessels and sounds from nearby villages. Breakfast will be buffet style but preceded by coffee, tea and light bites for early risers. Lunch will be served either buffet style or standard sit-down, while dinners will be four-course affairs. The line's produce is fresh, regional and seasonal.

Coffee, tea, soft drinks, beer and domestic spirits will be complimentary and served at the bar/library on the upper deck. An open-bridge policy will be in place.

Wi-Fi can be slow due to the remote areas traveled. However, some of the riverside towns have Internet shops. Mini-DVD players will be available with DVDs available in the library.

Kha Byoo Pandaw will have a guide giving briefings at cocktail hour every night and accompanying all excursions, which will be daily and free. Some local entertainment, such as folkloric dancing and puppet shows, also will be offered. Tipping is optional.

Overnights usually will involve stopping at a riverbank and securing the ship with lines attached to stakes hammered into the sand. As on other ships, part of the gangway tends to be little more than a plank and sandbags, and the trip can be tough for those with disabilities. But plenty of willing crew hands always will be there to assist. Most passengers see Pandaw as a world away from conventional cruising and take such measures in stride.