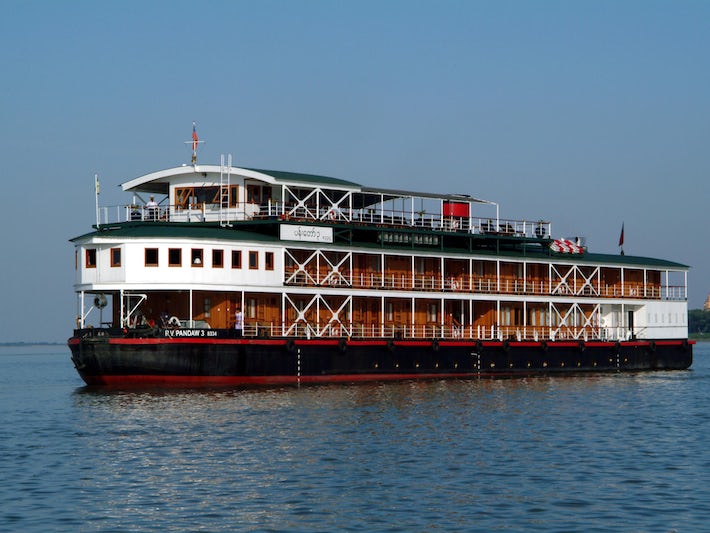 Tonle Pandaw is a handsome four-deck riverboat, a luxurious yet unostentatious replica of a colonial-era vessel dating from 1865.

The sun deck is a marvelous place to watch Asia go by, and this is where most passengers spend their time, relaxing on teak loungers and helping themselves to free drinks (and ice cream) from the bar.

The upper deck and main deck have cabins of 170 square feet, all with air-conditioning and French windows, and beds that can be set up as twin or double. Bathrooms have good showers, with bathrobes, hair dryers, and slippers provided. Cabins also have desks and safes. There is an onboard laundry and crew clean shoes after excursions.
There is an open-bridge policy.

Meals are served in the air-conditioned main deck restaurant, which affords panoramic views. Breakfast is buffet style but preceded by coffee, tea and light bites on the sun deck for early risers. Lunch is served either buffet style or standard sit-down, while dinners are four-course affairs. Produce is fresh, regional and seasonal.

Coffee, tea, soft drinks, ice cream, beer and domestic spirits are complimentary and served at the main bar on the upper deck.

There is wifi, but often slow due to the remote areas traveled. However, guides can help find internet shops in some of the riverside towns.

Tonle Pandaw’s guides give briefings at cocktail hour every night on the upper deck, and accompany the daily, free excursion Some local entertainment is offered, such as folkloric dancing and puppet shows. DVDs and mini-players can be borrowed. Tipping is optional.

The spa deck has a lecture room with big-screen TV, library, art gallery, a shop that sells souvenirs such as lacquerware and scarves and spa treatment rooms. Treatments are not included.

Overnights usually involve stopping at a riverbank and securing the ship with lines attached to stakes hammered into the sand. Sometimes part of the gangway is little more than a plank and sandbags and the trip can be tough for those with disabilities. But plenty of willing crew hands are always there to assist. Most passengers see Pandaw as a world away from conventional cruising and take such measures in stride.

Get Tonle Pandaw price drops
250,000+ people have entered their email