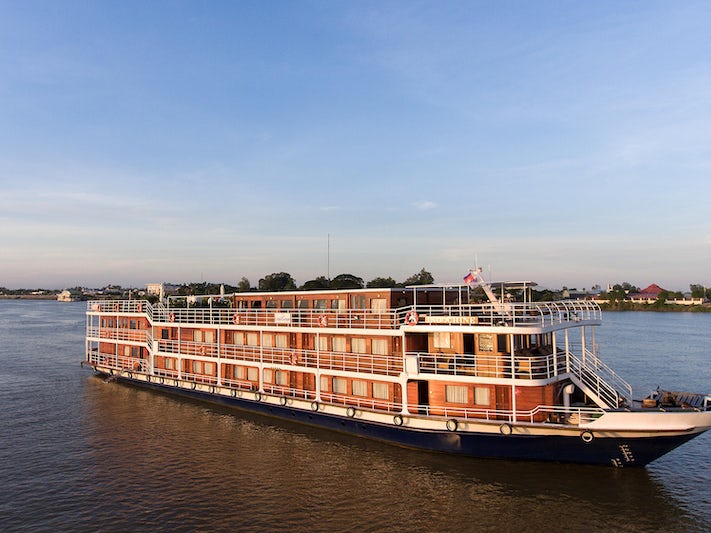 Launched in 2008 and completely refitted in 2012, Indochine is owned and operated by CroisiVoyages, part of French-owned and family-run CroisiEurope. Founded in 1976, the company is the largest river cruise line based in Europe and is now marketing itself to an English-speaking audience.

The company has chartered Indochine since 2011, but in 2014, it acquired Compagnie Fluviale de Mekong (CFM) and now owns the vessel, as well as three other Asian river ships. From August to April, Indochine sails Mekong River itineraries in Vietnam and Cambodia. Select sailings are designated "international" cruises, where English is the first language; however, all passengers are welcome to join French-speaking voyages. They certainly won't miss out on any of the sights or experiences as Croisi will always provide a separate guide -- no matter how few English speakers there are onboard. (There were just the two of us on our cruise, so it was like having a private guide, and we felt very spoiled!)

In fact, the cruise experience is definitely enhanced by the capable and enthusiastic cruise director and delightful crewmembers (employed by Croisi) and the local, extremely knowledgeable guides (engaged on a freelance basis). The latter stay with passengers for the duration of the cruise and land-based stays, and lead the shore excursions to destinations such as the famous Angkor Wat temples, Cambodia's bustling capital Phnom Penh and cosmopolitan Ho Chi Minh City.

As the Indochine is small and has a shallow draft, it can reach parts of the Mekong and its waterways and tributaries that are inaccessible to larger vessels. For example, it can float across Tonle Sap Lake during the dry season when Southeast Asia's largest lake shrinks to a quarter of its usual size. Whatever the season, this element of the cruise is a fascinating and exciting experience that is not included in most Mekong itineraries operated by other lines.

The intimate 48-passenger, colonial-style Indochine has wooden decks and extensive teak fixtures and fittings throughout, giving it a very traditional and homely feel. Cabins and public areas are functional rather than luxurious; although the cruise is certainly not basic, you don't get the extravagance and fuss associated with more expensive lines. However, any shortage of bells and whistles is more than made up for in Indochine's value-for-money cruise tours and the personal service of an independent family-owned business.

CroisiEurope's heritage coupled with the historic legacy of French Indochina -- the 19th-century period when France occupied Vietnam, Cambodia and Laos -- means passengers are mainly French. However, travelers from the U.S., U.K. and other English-speaking countries are now joining the cruises, and will be in the majority on the "international" voyages. Unlike European cruises, which tend to attract passengers in the 60-plus and seniors market, Asian cruises also draw younger cruisers -- including some in their 40s -- who are adventurous rather than passive travelers. Passengers should be fit, as the cruise will involve walking on uneven ground and negotiating steps in temples, palaces, villages and cities (often in hot and humid weather conditions). In addition, cruisers will need to embark and disembark on soft river banks with a makeshift wooden plank, and board smaller vessels for visits to floating markets. That said, the guides and crewmembers are always around to offer a helping hand, and on one outing, which involved a fun but bumpy trip to a temple in an ox-drawn cart, alternative transport was arranged in a motorcycle tuk-tuk.

Dress is casual and relaxed onboard and ashore. While there is no obligation to change for dinner, many do after a hot day of touring. Jeans and shorts can be worn in the restaurant. Loose-fitting clothes are advisable in the heat, with a sweater or wrap for cooler evenings if you want to sit out on deck. There is a fairly low-key captain's cocktail evening and gala dinner where some women choose to wear a dress and men opt for smarter slacks. Helpful hint: Don't go overboard on packing as there are fantastic bargains in the markets -- T-shirts, colorful cotton pants, scarves and beautiful traditional silk attire -- that are great to wear in the day and evening. The ship also has a very inexpensive laundry.

Note: In some temples, skimpy tops and shorts are not allowed and women are required to dress modestly in high-necked tops that cover the shoulders and skirts or pants that fall on or just below the knee. When this is required, the guides or cruise director will always advise in advance.

Get Indochine price drops
250,000+ people have entered their email

Where does CroisiEurope Indochine sail from?

Where does CroisiEurope Indochine sail to?

How much does it cost to go on CroisiEurope Indochine?