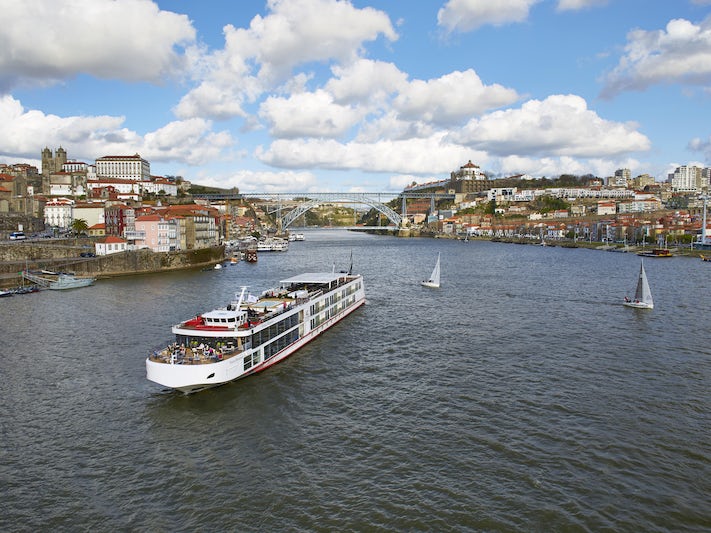 Viking Hemming, along with Viking Torgil, is one of two "baby" Longships that debuted in Portugal's Douro region in 2014. It's smaller, both in length and in passenger capacity, than regular Longships due to constraints of the Douro. There are some notable differences, mostly good, but, by and large, many areas are consistent and familiar: the airy, light-infused ambience; numerous real suites, each comprising two rooms with a generous balcony off the living area and a French balcony in the bedroom; and a lovely alfresco deck with plenty of seating areas.

What's new? The top deck has a swimming pool -- the first for a Viking Longship, baby or otherwise. Tweaks to the suites include actual walk-in closets, a vast improvement over the closets offered on the regular Longships. And the decor is softer and prettier, with Portuguese tiles and colors.

As Viking Hemming only carries 106 passengers, there isn't quite as much public space, which makes sense. However, what's missing is the true Aquavit lounge, the indoor/outdoor dining area. While the existing lounge has an alfresco aspect to it, no food is served either inside or out. For diners, the substitute is a series of nooks, all the way forward in the dining room, where windows can be opened. This offers fresh air, but it's not quite the same.

For these ships, Viking has positioned its interior corridors off-center to accommodate cabins. Full balconies can be found on one side, and narrower cabins -- some elevated to suites with separate sleeping and living areas -- have been placed sideways on the other side.

Less visible, but no less cutting-edge, are the ship's "green" advances, including hybrid diesel-electric engines that burn less fuel and produce 20 percent fewer emissions, making Longships cleaner and quieter than their competitors. There are even solar panels on the sun deck that help to fuel the engines. Additionally, the ship's chef maintains an organic garden on Hemming's upper deck during growing season.

The general age for river cruise passengers is 60 and older, but Hemming and other Longships, with their contemporary design, were built with an eye toward attracting a slightly younger traveler. Regardless of age, these cruisers tend to be well-traveled.

Casual, comfortable attire is encouraged onboard and ashore on Viking cruises. The must-pack item is, without question, a comfortable pair of walking shoes for shore tours. As the ship sails in Portugal, with its lovely and historic landscapes, tours frequently involve cobblestones and other uneven surfaces. Both the staff and the daily program provide ample notice when this is the case.

Generally, passengers "dress up" to varying degrees in the evenings, but never to the level of a big-ship formal night. Most don the kind of attire worn at a country club dinner, but others don't bother to change from their sensible shore excursion gear. Save your best outfits (maybe casual dresses for women and collared shirts and blazers for men) for events like the Captain's Welcome and Farewell dinners.

Get Viking Hemming price drops
250,000+ people have entered their email

Where does Viking Hemming sail from?

Where does Viking Hemming sail to?

How much does it cost to go on Viking Hemming?

The Douro Valley is exceptional.

We headed to Porto to join the Hemming and Viking looked after everything. The ship and the crew were superb. Us passengers were also up for a party - that helped.Read More
Nogmeister

The crew of the Hemming was attentive, the food delicious and the excursions were interesting and fun.Read More
Gloriann

Ive been with Viking several times and enjoy the high standard which Viking gives.

I can’t speak highly enough about Viking and the choices of the cruises. It’s Viking all the way for me and I’m looking forward to my next river cruise.Read More
JanGF

The staff and itinerary were outstanding

We will certainly consider other cruises, river or ocean-going with Viking in the future.Read More
Hutchinson Reid