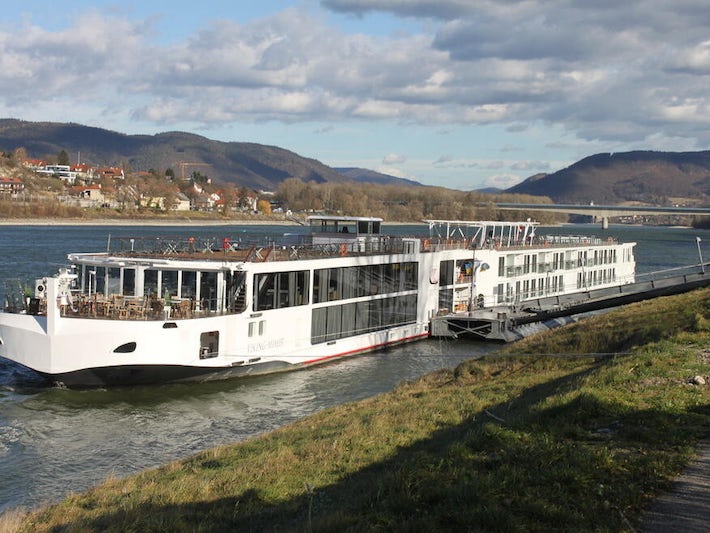 Editors Note: In 2018, VIking Eistla is being used in a private capacity and is not offering public cruises.

What first strikes you as you step onboard Viking Eistla, one of Viking's numerous Longship-class sisters? Sunlight. Streaming in through the glass-enclosed, two-story atrium is enough light to allow real flowers to grow. With backlit marble panels rising above a terrazzo floor and wood-and-glass staircase, and pale, earth-toned decor, the space has energy and natural appeal. If the ambience reminds some of Seabourn's Odyssey class, that's not a coincidence -- the vessels share the same lead designer, Norwegian firm Yran & Storbraaten.

Beyond the airy vibe of its public spaces, Viking Eistla and the rest of Viking's longships float a whole raft of features that are true innovations in European river cruising.

There is a sense of minimalism on Eistla and the other longships. You can perhaps best see the efficiency and maximization of available area onboard in the surprising new signature spaces that have been conjured: the Aquavit Terrace, the two largest true suites on a riverboat in Europe (each with separate living room and bedroom), not to mention seven slightly smaller true suites with separate living and sleeping rooms, and an increased number of cabins with full and French balconies.

Less visible, but no less cutting-edge, are the ship's "green" advances, including hybrid diesel-electric engines which burn less fuel and produce 20 percent fewer emissions, making longships cleaner and quieter than their competitors. There are even solar panels on the sun deck that help to fuel the engines. And the ship's chef maintains an organic garden on Eistla's upper deck during growing season.

The general age for river cruise passengers is 60 and older, but Eistla and other Longships, with their contemporary design, were built with an eye toward attracting a slightly younger traveler. Regardless of age, passengers tend to be well-traveled (though many are visiting Europe for the first time).

While we booked our cruise on the Viking Mani, we had a last minute change in the ship (to the Viking Eistla) because the Mani had to undergo some repairs.Read More
CityGirl02

The Viking longship Mani had an accident with a barge earlier before and was still being repaired, so we were unable to embark on it for our cruise. No worries.Read More
janet219199

River cruise on the Rhine River

We picked Viking because we had heard such good things about it. We were not disappointed. A Viking rep met us at the airport, took us to our hotel, was on site while we were there.Read More
sarahans53

It was a wonderful cruise for the great service and delicious meals as well as the Christmas markets in each port.We met some wonderful people and are still in contact with a couple whom we met, almost a year after our cruise ended.Read More
Nana43