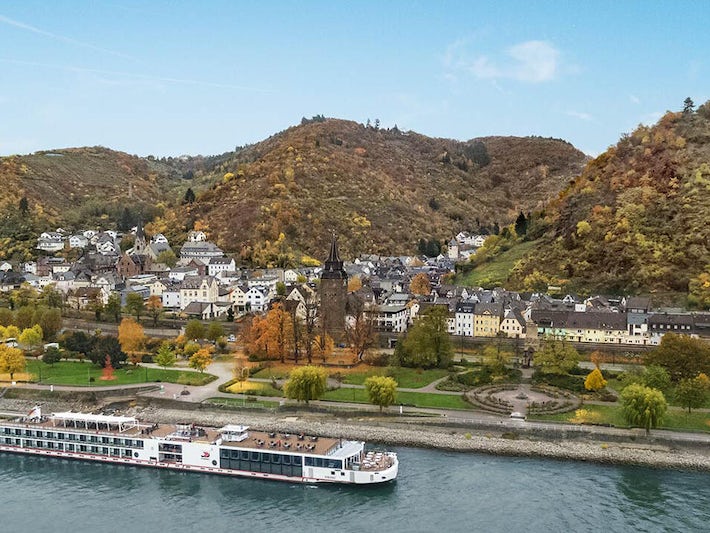 Ample public space and abundant storage in all cabin choices

Viking River Cruises operates a well-oiled travel machine and sailings on Alvsin are no exception. The logistics of the pre- and post-cruise extensions are executed smoothly from arrival to departure. Both included and optional (extra charge) activities are scheduled in Paris, Zurich and Prague. Comfortable motor coaches transport guests to and from the ship for the eight-night cruise that is the centerpiece of the cruise tours.

In Norse mythology, Alvsin (meaning quick-footed or rapid goer) was one of two steeds that pulled the chariot of the sun across the sky. Art throughout the ship is equine-themed in homage to its mythological namesake amid a decor that is soothing and understated in Scandinavian style. Colors throughout the ship are tan, gray and pale steel blue. Floor-to ceiling glass doors and windows lend an expansiveness to the public spaces.

That expansiveness, combined with plenty of outdoor space on the top deck and comfortable cabins (many with balconies), fosters an uncrowded atmosphere to the ship. Meals and activities are scheduled to create a smooth flow of passengers from one point to another, avoiding long lines and bottlenecks.

Both included and optional port tours consist of guided walking tours, motor coach tours or combinations of both. When needed, tours are divide into smaller groups, with one group usually created for "leisure" walkers, where the tour utilizes shortcuts to reduce the overall length of the walk while also avoiding stairs or inclines where possible. An estimate of the walking distance and the number of stairs involved in the next day's tour is explained each evening by the program manager.

Because the ship frequently docks near city centers, it is easy to skip the ship's tours and venture out on your own, either on foot or by taxi. City maps are available for each stop at the reception desk on the Middle Deck (Deck 2). Staff at the reception desk are both knowledgeable and eager to assist with plans you would like to make in any city along the way.

Get Viking Alsvin price drops
250,000+ people have entered their email

While there is an elevator between decks two and three, getting around the remainder of the ship involves stairs. Gangways are sometimes inclined and involve obstacles or steps in many ports. Bathrooms in all cabins have a raised floor requiring a small step up.

Food onboard Alvsin includes adequate choices and special dietary needs are handled individually by the chef and the maitre d'. Breakfast and lunch are served buffet style, and both lunch and dinner include regional specialties as the cruise progresses. Local beer and wine are served during lunch and dinner. Snacks consist of pastries and cookies located at two self-serve beverage stations on the Upper Deck (Deck 3).

The in-room entertainment system is perhaps the greatest weakness we found. Live TV consists of a handful of English-speaking news networks, National Geographic Channel and TNT, along with live cams from the ship's bow and the lounge. On-demand movie choices were quite limited and the only available on-demand TV series was Downton Abbey. The entire TV system had periods where it did not function at all, presumably due to geographical obstructions.

Passengers on Viking Alvsin are typically in the 60 to 65 age range with a small percentage just under 60 and an even smaller number younger than 50. Most are North Americans. Most are well-traveled and a large majority has cruised more than once, often on ocean cruises. First-time river cruisers and first-time visitors to Europe are commonplace. Loyalty to the Viking brand is evident among those who have previously experienced river cruising. On our cruise, several couples had cruised with Viking more than seven times, with three previous cruises being the average among returning Viking cruisers.

Couples make up the majority of travelers, but women traveling solo or with friends also make up a considerable percentage of the passenger roster. River cruises tend to bring passengers in fairly close contact with one another during tours and meal times. The crew on Alvsin does a nice job of breaking the ice and creating a sense of comradery among passengers to make that closeness more comfortable.

The official dress code calls for country club casual for evenings with slightly dressier attire on the nights of the captain's welcome and farewell parties. In practice, many passengers wear casual and functional travel clothes throughout both the day and evening. Jeans or slacks with collared shirts are the norm for men, with women primarily in comfortable slacks. Shorts and T-shirts are appropriate daytime attire for both men and women during warm-season cruises and comfortable shoes are the rule, not the exception.

Busy days in port often leave little time for changing prior to dinner, meaning almost anything other than shorts would be acceptable in the public areas in the evening. Often the addition of a jacket, sweater or dressy top are a sufficient distinction between day and evening attire.

One shore excursion is included in each port of call, including the pre- and post-cruise extensions. The excursions are usually an overview of the port and its history. Points of interest are visited, either on foot or as drive-bys in motor coaches. One wine tasting excursion may also be included. Bottled water is handed out at the beginning of each tour during the cruise portion of the trip.

Airport transfers are included when air is purchased through Viking. Viking personnel meet you at the airport, shepherd you to transfer vehicles and hand you off to a Viking welcome desk at the arrival hotel. At the end of your cruise, a Viking staff member accompanies you on the transfer to the airport to assist you in finding the proper airline check-in desk.

On the prepackaged cruise tours, transfers between hotels and the ship are included in the cruise fare and typically have walking tours or free time at designated stops incorporated into the transfer. Meals are not included in these transfer tours.

Wi-Fi is included throughout the ship. Multiple devices may be connected at no additional charge. The Wi-Fi speed is limited by location and overall volume of use. Expect signal good enough to check emails and load a few webpages, but not for streaming content. Two laptop computers are available to use in the library area on Deck 3.

Beer, wine and soft drinks are included at no additional charge during lunch and dinner. Beer choices include a German beer on tap and several bottled and canned beers that may change with the region. Included wines consist of a choice of one red or one white; there may be an alternative available if the primary choice is not to your liking. Pours are generous, continuing even when after-dinner conversation stretches the evening a bit.

Tips are not included in the cruise fare, except for passengers from Australia and New Zealand. Gratuities are paid at the end of the cruise in cash or by credit card. (Euros are the onboard currency, but dollars are also accepted for gratuities.) The recommended amount on Viking's Europe cruises is 12 euros per passenger, per day, which is divided up among the crew.

Where does Viking Alsvin sail from?

Where does Viking Alsvin sail to?

How much does it cost to go on Viking Alsvin?

Fantastic from start to finish