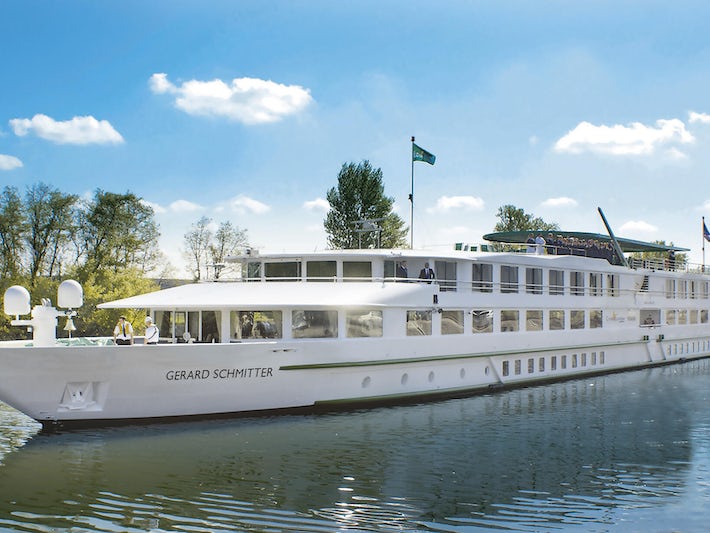 Launched in 2012, Gerard Schmitter follows the blueprint of CroisiEurope's more than 20 other riverboats. A modest but comfortable ship, it plies the waters of the Rhine in Central Europe year round, catering to a majority French clientele. CroisiEurope's family roots are clearly on display on Gerard Schmitter; the ship itself is named for the company founder, and both his portrait and his own art can be found onboard.

Like other ships in Croisi's fleet, Gerard Schmitter has a bright color scheme that is repeated throughout the ship. The pink and purple furnishings onboard are prevalent, but they're softened by the neutral colors in the carpet and wall coverings. All in all, though, pastel reigns on this ship -- from Mr. Schmitter's still lifes to the soft colors of the blown-glass lights in the reception and lounge areas.

The ship carries 176 passengers in 88 simply furnished cabins and offers a very French set menu at lunch and dinner. The fare onboard is consistently good, although it can be a bit rich for British and American palates. Like most other Europe riverboats, Gerard Schmitter includes wine, beer and soft drinks with lunch and dinner in its fares. However, shore excursions cost extra.

Interestingly, CroisiEurope has increased its marketing in the English-speaking sphere of late, so it's likely that the onboard experience will reflect this push in coming years. Currently, a niche group of Francophiles from the U.K. and other, mostly European, countries complements the French-speaking majority of cruisers. The line makes every attempt to group its non-French passengers together on cruises by primary language and nationality, and English is the secondary official language onboard. Brits and Americans make up a small fraction of the line's clientele -- after French, Germans, Belgians and Swiss.

Cruising on the Rhine full time, Gerard Schmitter has plenty of space for sitting and watching the countryside roll by. The ship offers two lounges, fore and aft, both with access to outdoor deck space. The open-air top deck is so large and relatively empty that it brought to mind a sports field with its ample amount of space, few chairs and indoor/outdoor carpeting. Overall, it's a pleasant and unpretentious ship that reflects the company ethos, offering value-for-money river cruise experiences.

The general age for river cruise passengers is 60 and older, which is the typical demographic onboard Gerard Schmitter. More than half the line's passengers are French, with about 6 percent coming from the U.K. and U.S. annually. With a price point that emphasizes value rather than luxury and a solidly French onboard experience, many passengers will be veterans of package tour travel, particularly within France. The line operates in two languages onboard, French and English, including all announcements. Provisions are made when larger groups of passengers who speak neither language are onboard.

Smart casual is the normal mode of dress onboard Croisi ships. Because the ship and its clientele are mainly European, colors are darker, and generally nice trousers or jeans and collared shirts for men (blouses for women) is the norm onboard. There is, however, one Gala Dinner on each sailing, with most passengers in evening dress, enjoying a crew performance and dancing after dinner. If you're planning on touring -- either with the ship's added-fee shore excursions or on your own -- don't forget a comfortable pair of shoes. As the ship sails in Europe, with its lovely and historic landscapes, tours frequently involve cobblestones and other uneven surfaces.

Get Gerard Schmitter price drops
250,000+ people have entered their email

Find a Gerard Schmitter Cruise from $1,318

Where does CroisiEurope Gerard Schmitter sail from?

Where does CroisiEurope Gerard Schmitter sail to?

How much does it cost to go on CroisiEurope Gerard Schmitter?

Schmitter, A stop over in Amsterdam before leaving port then again an overnight before leaving Only wish the did longer cruises say about 14 days from Amsterdam to Vienna which we did two Years go ,.Read More
john doolan

The room was pretty spacious for a river cruise ship and the big windows meant you could lie in bed and just watch the river go by.My wife and I selected this cruise because we had heard good things about the value of CroisiEurope and we really wanted to see the Rhine river region.Read More
jsnipper

We didn't see the lovely views because the weather was quite foggy, on the plus side it means that we could do this same cruise and be surprised by the scenery.The food was absolutley superb and the accompanying wines which were included in the cost of the cruise were just perfect and there was plenty to choose from, the dining experience was a real highlight of the cruise, we could not have asked for anything more.Read More
J Evans

Upon arriving via train from the airport had no problem finding the ship thanks to the map we were provided and just a short walk to ship.Thankfully the ship docked right in town no issue with long walks.Read More
purple01