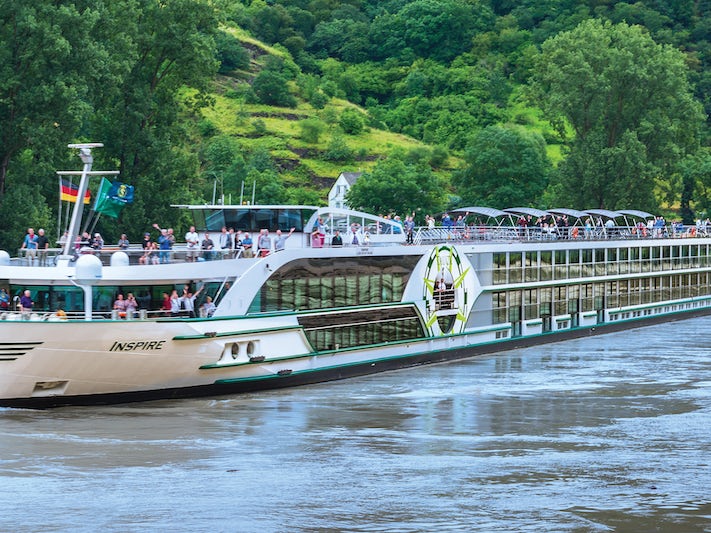 Floating down the Rhine, sitting by our window and watching the Dutch countryside roll by ... with the occasional walking tour thrown in: That's what we thought our ms Inspire cruise would consist of. Boy were we wrong. There's very little that's relaxing about sailing the Dutch Waterways onboard Inspire. It's an active vacation steeped in history and culture for people with inquiring minds. And it's fascinating.

The three tour directors onboard know everything -- and we mean everything -- about the places the boat visits. From the history of the cities and towns and the culture of the people to the artwork and literature that was birthed there, passengers are introduced to it all.

But it's not just the off-the-ship experience that's so enjoyable. Inspire is a gorgeous boat -- all shining brass, sparkling crystal and warm wooden tones, but its opulence isn't offputting. Instead, from the minute you step onboard, you feel welcomed. Within a few hours of boarding, you can meet with the maitre d' to discuss any dietary restrictions, plus you'll get a personal phone call from the hotel manager to see if you cabin is all in order. Your well-being is everyone's top priority.

Service is a bit different on Inspire though, as it is on all ships in the fleet. Because Tauck charters its boats from a company called Scylla, none of the crew -- except the cruise director and three tour directors -- are Tauck employees. While everyone is friendly, there is sometimes a clear distinction in quality between the two sets of crew. If Tauck's directors are exceptional, Scylla's crew ranges from just adequate to quite excellent. On our sailing, some of the dining crew left a lot to be desired, though the two maitre d's were amazing and always ready to bend over backward to make passengers happy. They weren't alone, though. When a passenger wanted popcorn, the hotel director visited a supermarket in port to pick up some.

The all-inclusive nature of the trip is another big check in the plus column. From the biggies like plentiful food and overflowing drinks to the little touches like a flower for each passenger at the American War Cemetery to lay on a soldier's grave and 20 euros per person given out on the last day to buy your own lunch in Brussels, Tauck thinks of just about everything.

Excellent onboard enrichment with three tour guides all well-versed in your itinerary.

Days in port are packed from morning 'til evening; if you're looking for relaxation you won't find it here.

Tauck attracts a solidly boomer demographic, with an average age of 68 or thereabouts. Hailing mostly from the United States, with a smattering from Canada, passengers are well off and well-traveled. Some 40 to 50 percent of passengers have been on either a Tauck river cruise or land tour before.

Smart casual is the official dress code, but comfort really is the name of the game, with at least two-thirds of the passengers sticking to jeans, even at meals. Only on the Captain's Welcome night and the last night is more formal attire (suit and tie, but not black tie, for men; nice dress or pantsuit for women, no gowns) recommended (but not required).

Had a wonderful Christmas Markets Rhine cruise with Tauck

The previous night the ship had been in an industrial area miles out, so I was expecting to pay for taxis, but on the day they had moved to a berth right in the heart of the old town.We were very pleased to make new friends and enjoyed meeting lots of new people (all living in the USA apart from us!?Read More
worldtraveller99

Tauck is a wonderful operator It is an all inclusive cruise...all of the gratuities..shore excursions..alcohol and beverages The MS Inspire is a gorgeous ship..I have been on 28 ocean cruises soRead More
biguypbi

I was expecting a small tour bus or van.I did not have to pull out my wallet except when we bought postcards etc from the small gift shop on board.Read More
SD Kam

We should have jumped at the first port.

This trip was regrettably not a good fit for our family for so many reasons - first of all, ever see the movie "Out to Sea"?Board at your own risk - if any of the above sounds enticing to you, good luck with your holiday.Read More
mikefmilk@aol.com