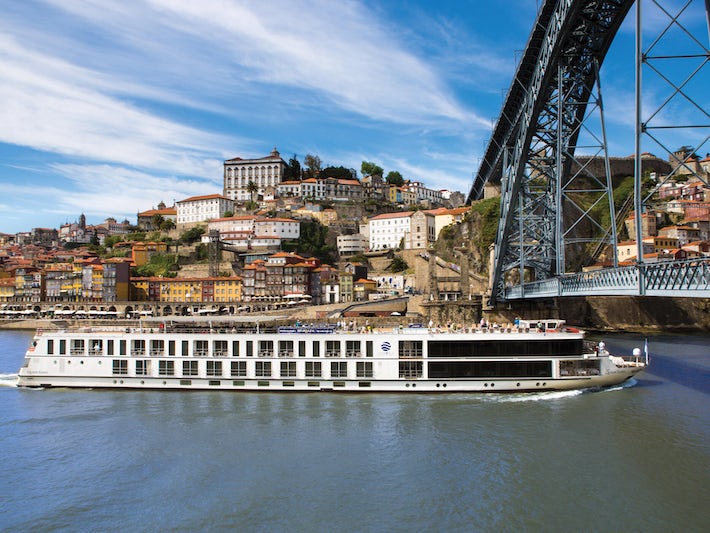 Queen Isabel launched in spring 2013 as the newest and one of the most luxurious ships on Portugal's Douro River. The ship is owned by DouroAzul, one of Portugal's leading river cruise companies, with an impressive portfolio of riverboats and ships (including the Spirit of Chartwell), as well as extremely smart new coaches, which coordinate with the ships for shore excursions. Queen Isabel is currently chartered by boutique cruise line Uniworld Cruises for all its cruises along the Douro.

Built in Portugal, furnished with locally crafted furniture and staffed by Portuguese crew (with the exception of the Dutch chef), the ship is reassuringly authentic. It's relatively small when compared with other European ships. At just 260 feet long by 37 feet wide, Queen Isabel's dimensions are dictated by the relatively short and narrow locks that pepper the Douro. As a result, the ship's 59 cabins are fairly small, particularly in comparison with those found on Uniworld ships on, say, the Rhine and Danube. However, cabins on the lower deck have large windows, and all the cabins and suites on the upper two decks offer balconies that are beautifully appointed. There are also good bathrooms and adequate storage space.

Queen Isabel further boasts an excellent restaurant, with a small, separate, alfresco dining area; a spacious lounge with an open-air bar, where light lunches are served and can be enjoyed out on deck; and a large sun deck with elegant furniture and a small (thigh-deep) heated swimming pool. There's a shop stocked with tasteful local merchandise, a tiny yet functional spa and gym, and broadband Internet that's both fast and reliable, accessed via numerous public Wi-Fi hotspots and in cabins.

Passengers familiar with Uniworld's ships will find the decor reassuringly familiar: Beatrice Tollman, the president and founder of The Travel Corporation, parent company of Uniworld, and winner of the Hotelier of the Year Award 2012, played a leading role in the creation of Queen Isabel's interiors. Expect lavish fabrics in muted colors, moderately ornate furnishings and high-tech in-cabin facilities.

Finally, Queen Isabel features a 1,679-square-foot area equipped with solar panels on the sun deck, which generate a significant proportion of the energy used by the ship.

Passengers aboard Queen Isabel are typically well traveled, fairly experienced cruisers and range in age from 40s to 70s. The majority tend to hail from North America with a smattering of Britons, Europeans, South Americans and South Africans. Given that exploration of the port wine growing area and vineyards is a major focus of voyages on the Douro, many passengers already possess significant knowledge of wine and are eager to learn more.

The dress code for the duration of the cruise is casual, bar two evenings deemed smart casual. The captain's welcome dinner has been replaced with a less formal evening with a smart casual dress code.

Thanks to the entire staff and crew of the Queen Isabel for a relaxing and memorable vacation!Read More
lhoward2018

Like all ships on the Douro river the Queen Isabel is by necessity undersized. Our cabin was necessarily very small but somehow the shower was big enough.Read More
philw1776

First cruise of the season

River cruise with no cruising!

We choose Uniworld for our first river cruise as it is supposed to be I boutique ship.The ship the Queen Isabel wasn't in Porto as planned when we got on as the river was too high.Read More
P and A from Leeds