Legend of the Seas Review 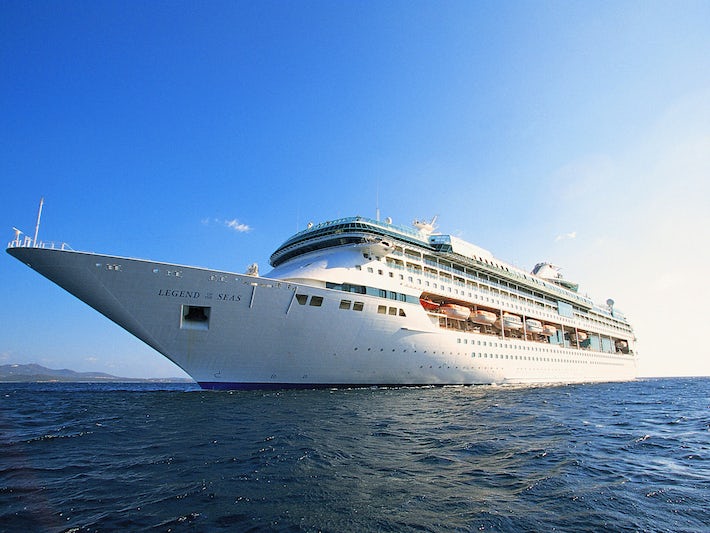 Legend of the Seas left the Royal Caribbean fleet in May 2017. It joined Thomson Cruises as TUI Discovery 2.

Plenty of dining choices, both free and for an extra fee

Not a lot for kids and teens to do onboard

Although Royal Caribbean's Legend of the Seas was launched in 1995, it emerged from a 2013 dry dock looking pretty darn spiffy. Just about everything was upgraded, including the carpeting, soft furnishings and overall decor in cabins and most public areas. A total of 13 new cabins was added on decks 7 and 8, and Deck 6 cabins, which previously had no verandahs, were outfitted with balconies.

So what else did the ship receive during its $50 million worth of renovations? Its signature top-of-ship Viking Crown Lounge was spruced up and decreased in size to make room for Izumi and Chops Grille, two of the vessel's three alternative dining venues. Similarly, part of the upper floor in the Romeo and Juliet Dining Room is now cordoned off to serve as home to Chef's Table, an upscale for-fee dinner experience. Meanwhile, the Park Cafe, a gratis bistro-style eatery, was added to the Solarium, the ship's indoor pool area.

In the technological arena, Legend was outfitted with a giant outdoor movie screen, which resides on the pool deck, and digital "Wayfinders" were added throughout most elevator areas. They feature multilingual touch-screens that allow passengers to check the date and time, view deck plans, access the daily Cruise Compass and map directions from their current location to wherever they're headed next -- all with the push of a button.

Further, the R Bar was added to the ship's hub, the five-deck Centrum, which is also home to what are probably the most impressive bits of entertainment onboard: aerialist shows, which feature costumed acrobats dancing in midair.

While we didn't notice much aesthetical wear and tear thanks to the aforementioned refurb, the food and entertainment were hit-or-miss, and we did witness several communication breakdowns among the ship's staff. To be fair, we were told that there were a lot of new contracts onboard, but the problem is that it showed. Service was generally decent, but a couple ill-informed and rude crewmembers did detract from the experience.

Overall, Legend of the Seas feels comfortable and cozy, as it's smaller than most of the line's other, newer, more shiny ships; because there are fewer bells and whistles, life onboard moves at a slower pace. It's also a great option for anyone who likes longer cruises to a variety of interesting locales, including the Panama Canal (for which Legend's smaller size is absolutely necessary).

Because sailings on Legend of the Seas tend to be a bit longer -- and because certain itineraries it sails, such as the Panama Canal, are high in demand and price -- passengers are generally retirees or folks with extra vacation time and funds. They also tend to be well-traveled cruisers who have sailed with Royal Caribbean before.

On Panama Canal, Canada and Caribbean sailings, about 95 percent of passengers are North American, while the rest hail from Europe and Latin America. On Europe voyages, the number of North Americans drops to about 50 percent. Announcements and literature, including the daily Cruise Compass, are offered in several languages like English, Spanish, German, French and Italian.

Legend of the Seas has a casual feel during the day, with most passengers opting for jeans and T-shirts or beachwear. There are three degrees of dress for dinnertime. Casual means nice jeans or khakis for men with button-down or collared shirts; women generally wear sundresses or capris with stylish tops. Smart casual refers to slightly more dressy attire like blazers for men and dresses or pantsuits for women. Formal tends to find men in suits or tuxes and women in sparkly dresses or gowns. The breakdown of formal nights is: one on sailings of five nights or less, two on sailings of six to 13 nights, and three on sailings of 14 nights or more. The dress code in alternative restaurants onboard is always smart casual.

Yes, Legend of the Seas is old and yes stocks were running low, I get that, but people who booked on the last few legs knew what they were in for.Read More
LTLBrissie

Sad to lose this great ship and crew

We had previously adored Rhapsody of the Seas and found Legend and its crew were to the same very high standard.Read More
moateysthetrippers

A real pity that she is leaving Brisbane

By way of background, this is my 9th cruise and 4th with RCI. I’ve previously cruised from Australia on Voyager and Explorer of the Seas (both sister ships) and Rhapsody of the Seas.Read More
Ransome

LAST LEG ON THE LEGEND

This was our last opportunity to experience "Legend Of The Seas" before she was transferred over to The Thompson Group.Read More
RICHO42