Enchantment of the Seas Cabins 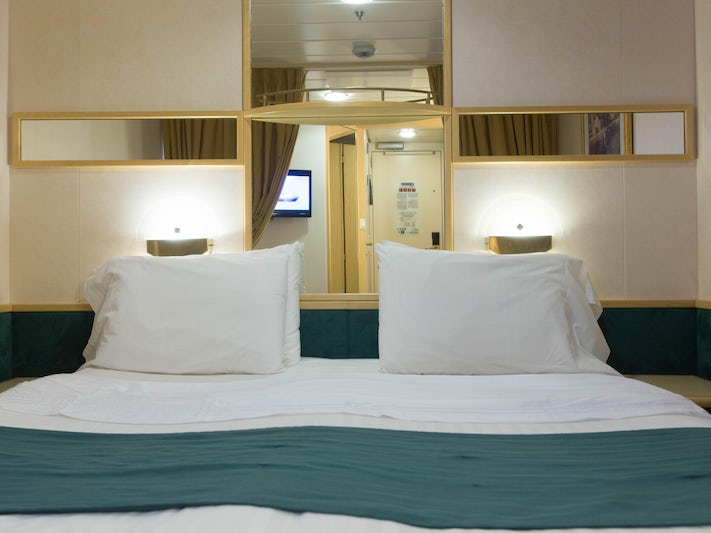 Royal Caribbean Enchanted of the Seas rooms are comfortable but missing modern touches, such as USB ports, bedside outlets and glass shower doors. While we don't think the furnishings and carpet date back to the ship's launch in 1997, they certainly look like they do.

Despite coming in under the industry average in terms of size, cabins are comfortable and spacious enough for two people. Junior suites and higher-category rooms feel large enough for a family of four, but, honestly, we can't imagine cramming more than two people into an inside or ocean-view cabin on Enchantment of the Seas. Lots of people do though, and we often saw the ceiling Pullman beds fully set up as we passed open doors.

(Nevertheless, here’s a tip for those in an interior stateroom: for the best inside cabin on Enchantment of the Seas pick one of the handful of units that are located on deck 3 between the two elevator banks (the farther away from either of them, the better). They get little afterhours noise and there’s no ship motion to be felt on normal weather conditions.)

Plenty of rooms do offer extra beds for up to four people, and some suites can even take up to eight. Enchantment of the Seas cabin 7666, an aft junior suite, is not surprisingly one of the most popular cabins on the ship. It’s more spacious and has a bigger balcony than other cabins in this category, and doesn’t get as much noise from the Spotlight Lounge below as the rest of the Enchantment of the Seas junior suites in this section.

There are also lots of connecting rooms, as well, for those who want to share some space but don't want to be confined to one room. You'll find 20 accessible cabins in a variety of categories.

All cabins come with at least two closets and three large drawers, as well as smaller desk drawers and cabinet space. A couple of smaller, camouflaged shelves are tucked behind the sides of the desk mirrors. Rooms have at least two chairs: one desk style, one armchair. The desk has some open space, but half of it is usually taken up by a tray with your ice bucket (if you request one) and glasses.

The only electric outlets in the room are located by the desk as well. You'll find one U.S. and one U.K. outlet. We used an adaptor in the U.K. outlet so we could charge more than one item at a time.

Beds are almost all twins that can be pushed together to form a "Royal King"; a handful of rooms have queen beds instead. In many of the rooms, the bed is backed by a mirror, ostensibly to make the small room feel bigger. But, like the furnishings and carpet, the brass-framed mirrors just give the room an out-of-date feel. Overhead lights are perfectly positioned for hitting your head in the middle of the night.

Most rooms have one flat-screen TV with several channels, including news, sports, movies and several ship channels with all kinds of information about offerings of Enchantment and Royal Caribbean, in general.

Enchantment of the Seas interior rooms and ocean-view cabins without a balcony do not have mini-fridges, but all other cabin categories have them. Similarly, all balcony cabins and higher have double sofa beds, while only some inside and ocean-view rooms have them.

The standard Enchantment of the Seas bathroom is small. Forget about trying to fit two people in at the same time, and the showers, which are seriously undersized, have flimsy shower curtains that don't reach all the way to the bottom. Unless you're paying attention, you're going to end up with water on your bathroom floor.

We suggest asking your room steward for an extra towel and have it already on the floor when you step into the shower. In the shower stall, you'll find a pump with a body wash/shampoo/conditioner combo; if you care at all about your hair, we suggest bringing your own bath products. There's a bar of soap for the sink.

Enchantment of the Seas Rooms

Interior: Interior cabins are the most common type of cabin on this ship, with 463 of them divided into three categories. The standards are tiny at 136 square feet. Enchantment of the Seas large interior staterooms, which can hold up to six people, are 234 square feet and have a double sofa bed and two bunk beds, in addition to the two twins. Accessible interior rooms are 252 square feet and, depending on their configuration, can fit up to three, four or five people.

Oceanview: There are four varieties of ocean-view rooms; standards are even smaller than inside rooms at 126 square feet, and depending on their configuration (some actually have a double sofa bed in that tiny space!) can hold two, three or four people.

Accessible ocean-view cabins are 262 square feet and can hold up to five people.

Balcony: There are just 248 cabins with balconies on Enchantment of the Seas and some of those are suites. There are two types of standard balconies. The non-accessible Enchantment of the Seas balcony stateroom is 191 square feet and has a 39-square-foot balcony. These rooms can hold four or five people. Accessible balcony staterooms can hold up to four people and are 350 square feet, but the balcony is still only 39 square feet.

Mini-suite: Junior Suites are among the Enchantment of the Seas’ best cabins in terms of value. They are 247 square feet, have a 74-square-foot balcony and can hold up to four people. There is also an accessible version of this room; that's 347 square feet, also with a 74-square-foot balcony. Enchantment of the Seas junior suite perks include priority check-in and boarding and an in-room Mr. Coffee/Tea service.

Enchantment of the Seas Suites

There are four kinds of suite onboard Enchantment of the Seas, ranging from 349-square-foot one-bedroom Grand Suites to the Royal Suite, which comes in at 1,000 square feet.

Enchantment of the Seas suite perks include priority check-in, boarding and departure; a pillow menu and Gilchrist & Soames bathroom amenities; concierge services; complimentary pressing on the first formal night of the sailing; priority dining reservations, spa bookings and shore excursion ticketing; a suite party on sailings of five nights or longer; a tour of the bridge, galley and backstage; a welcome fruit basket and Evian water; complimentary 24-hour room service and the ability to order room service off the main dining room menu at dinner; private breakfast in Chops Grille; and reserved seating in the theater.

Those staying in the Royal Suite also get a welcome bottle of Moet & Chandon Champagne.

One-Bedroom Grand Suite: The one-bedroom Grand Suite is the smallest suite on Enchantment of the Seas: it measures 349 square feet and has a 111-square-foot balcony. The suite has a bedroom and living area, separated by a curtain, and can fit up to four people. It's got a massive amount of closet space and a lovely bathroom with shower/tub combo. The oversized balcony has a glass-topped wicker drinks table with two chairs and two thickly padded loungers. There are 12 one-bedroom Grand Suites.

Owner's Suite: The Owner's Suite on Royal Caribbean Enchantment of the Seas is a bit larger at 517 square feet, also with a 111-square-foot balcony. It, too, has a bedroom and a living area that are separated by a curtain and can fit up to four people. The bathroom is sizable and has a glassed-in shower, separate tub and a bidet (along with a traditional toilet). The balcony is identical to the one found in the one-bedroom grand suite. There are five Owner's Suites on Enchantment.

Two-Bedroom Grand Suite: The Enchantment of the Seas Two-Bedroom Grand Suites are the only two-bedroom options onboard. These four suites are 532 square feet, each with a 79-square-foot balcony. The suite features two bedrooms, each with two twin beds that convert to a royal king, plus there's a living room with a double sofa bed and two pull-down beds, increasing the suite's capacity to up to eight people. There are two bathrooms, one with just a shower and one with shower/tub combo.

Royal Suite: There’s only one Royal Suite on Enchantment of the Seas. It is the largest suite onboard, coming in at just more than 1,000 square feet, plus a 172-square-foot balcony. It's also the most luxe with a baby grand piano and lots of marble. Holding up to four passengers, the suite offers lots of room to spread out, with separate bedroom and living rooms and lots of extra seating, closets and drawers.

In the bedroom, you'll find a full king-sized bed, while the living room has a double sofa bed and a glass dining table with room for four. The master bathroom has double sinks, a separate -- and oversized – glassed-in shower and a marble bathtub. There's even a bidet, along with a regular toilet. On the large balcony, you'll find two thickly padded loungers and two wicker chairs with a glass-topped drinks table.

Find an Enchantment of the Seas Cruise from $299