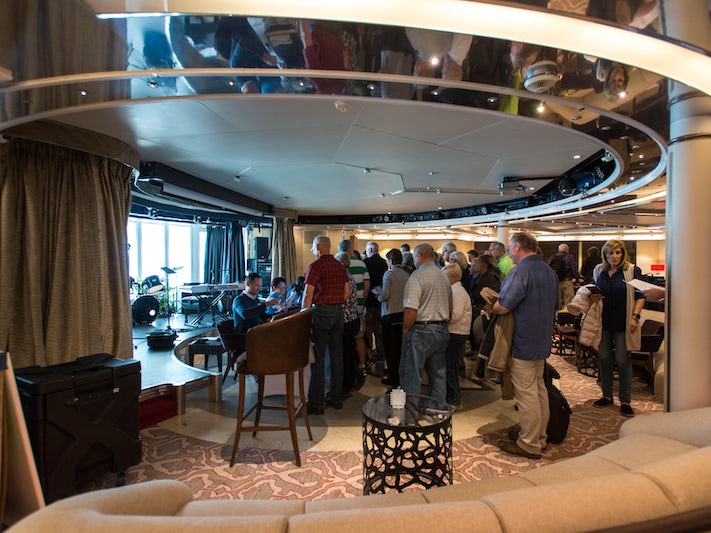 Theater and Shows on Star Pride

Shows onboard Star Pride consist of a blend of musical performances by the ship’s entertainment team, the crew talent show, and a game of Liars Club played by the officers and crew members. All were entertaining and enjoyable. There were no comedy performers, though comedy was certainly incorporated into the crew show and the Liars Club game.

Daily Things to Do on Star Pride

Daily activities on Star Pride range from exercise and dance classes to trivia games and ice cream socials on the pool deck. Port talks are given each afternoon for the next upcoming port. The day’s events are available on the television in your suite or on your phone by logging into the Wayfinder portal using a QR code provided on the first day onboard. Daily printed programs are not delivered to staterooms but can be requested at reception or from your stateroom attendant.

With only 312 passengers onboard, you aren’t likely to find large parties taking place in the evenings, but music and dancing are offered late into the night. The Compass Rose is the primary spot for dancing but was also offered on the pool deck on some evenings during our sailing. We found fellow cruisers who dance were quite happy with the options. Small after dinner gatherings seemed to migrate to the Star Bar for late-night conversations. The overall vibe on Star Pride is sociable but not loud and rowdy, with at least half of the passengers still seeking some sort of entertainment or gathering long after dinner.

There are only three bars onboard Star Pride. Star Bar on Deck 8 across from Star Grill is a popular spot throughout the day and evening. Compass Rose is open primarily in the evenings until late at night, with music and dancing being the focus. The Lounge also has a bar, open when entertainment like the Crew Show is taking place.

Even if you aren’t an all-day drinker, Star Bar is an ideal gathering spot. Conversation and drinks – whether soft or hard – flow most of the day and into the night.

Best drink for a sunny day at sea: Ask for a mudslide, then watch as the bartender blends your drink, pour it in a giant glass with chocolate syrup drizzled down the inside, then step out of the bar and head to the soft-serve machine to top your drink with a swirl of vanilla. Then sit back and see how many other people suddenly want what you’re having.

Best refreshing non-alcoholic drink to substitute for a plain soda: Sometimes you just need some hydration to chill with. Ask the fun bartenders at Star Bar for a cherry limeade. It’s just Sprite with a shot of grenadine and a twist of lime but see if you don’t agree that it’s a perfect poolside cool down.

On a ship this small, your options are limited, although this area has been dramatically improved in the 2022 reburbishment. The main pool on Deck 7 is a tiered infinity pool with a glass front. Pool towels are neatly stacked in rolls around the pool itself and in unoccupied lounge chairs. A whirlpool hot tub is just above the pool.

There’s a second whirlpool tucked away on a hidden sundeck at the bow on Deck 5. It’s accessible from Decks 5, 6, and 7. Towels are rolled up on a shelf near the door.

Luckily, as there are few true balconies to lounge on, Star Pride has an adequate number of lounge chairs surrounding the pool on Deck 7 and Deck 8 overlooking the pool area. The same area has a selection of tables and chairs and a pair of wicker sun beds. A second, quieter spot to sunbathe is on the forward whirlpool deck on Deck 5.

Services and Wi-Fi on Star Pride

Star Pride has paid Wi-Fi that works reasonably well most of the time for emails and social media checks. It bogs down a bit when everyone is onboard with nothing to do, making uploading photos or work a bit of a challenge. The system logs off your device when not in use for even a few moments, which results in a great deal of logging back on. Packages are based on the amount of data used or as an unlimited per-day package. Wi-Fi is also part of Windstar’s All-In Package that includes unlimited beverages and gratuities on a per-day basis.

Most ship services are managed through the reception desk on Deck 5. Shore excursions are purchased and managed at the Destinations office, also on Deck 5. The ship has a larger boutique than one might expect on a small ship. Located on Deck 6 forward, it features a wide range of activewear, logo gifts, as well as jewelry and watches.

The spa, exercise area, and salon are clustered together on Deck 7. The area has a big-ship feel to it, with plenty of space for everything. We found the staff friendly and not overly pushy about selling us on additional treatments. The thermal suite is available to all guests at no charge and includes, a dry sauna, a steam room, an “experience shower” and heated lounge chairs.

The fitness room is clean and well-supplied with equipment. Free classes are held both in the gym and on deck. Personal trainer sessions and specialized classes incur a charge.

Star Pride does not allow children under age eight onboard. There are not child specific activities onboard, but teens and tweens are welcome throughout the ship.

On our sailing, we saw multiple families with adolescents and older teens traveling together. Puzzles and games are available for use in the Yacht Club and the On Demand movie selection included choices suitable for any age.