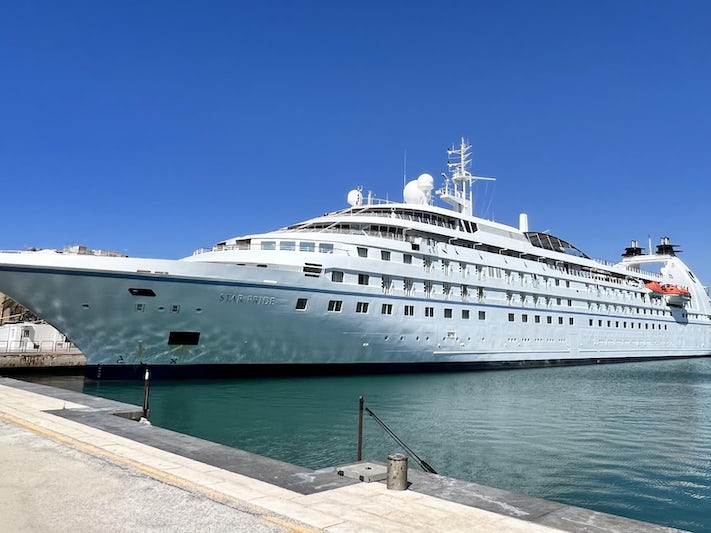 Star Pride’s stretching and refurbishment in 2022 improved the ship’s ability to serve a clientele who want variety, comfort, and quality service. Windstar repeat cruisers talk about the feeling of cruising on a wealthy friend’s yacht and that is exactly what the line achieves on Star Pride with an atmosphere that is both laid-back and welcoming. The split-deck layout, where staterooms occupy half of each of the middle decks, means that dining and entertainment options are mere steps away from any cabin. And surprisingly for such a small ship, there are choices for almost everything – from what to eat to where to sunbathe or where to enjoy the ocean view.

Star Pride is ideal for cruisers seeking lesser-known ports with a sociable cohort of fellow passengers via a premium, yet unpretentious ship.

Though there are a few secret hideaways to explore, the layout on Star Pride is basic – everything guests might need is close at hand, with adequate spacing between venues to allow for smooth traffic flow, with pathways that are entirely indoors if the ship is sailing in inclement weather conditions.

Decks 7 and 8 are all public space, encompassing the pool and one hot tub, The Veranda/Candles shared restaurant space, sun decks, the spa, salon, and gym area and the Yacht Club. Decks 3 to 6 are split between forward staterooms and dining and entertainment options in the aft of the ship. The dramatic brass-railed circular staircase dominating the atrium acts as an easy route connecting all the important indoor spots, as well as the gangway on Deck 4.

Even though the elevators are exceptionally small, they are adequate in spacing and numbers along the length of the ship to accommodate those opting not to take the stairs between decks without much waiting. Stairs are required to board or depart the ship at the gangway.

As for those secret Star Pride spots we mentioned, at the forward end of the stateroom hallway on Deck 5 there is a doorway that opens onto a small whirlpool deck. Stairs connect this perfect hideaway to the cabin hallway of Deck 6 and the walkway around the Bridge on Deck 7. The first time we stepped out the doorway onto this deck, three people enjoying the peace and quiet gave us a look that said, “Don’t you dare tell anyone where you found us.”

The Yacht Club, forward on Deck 8, is not quite that secretive, but we encountered many other cruisers who did not know of its existence. The entrance is somewhat recessed on the starboard side of the forward elevator and stairwell.

At 277 square feet, even the smallest of the 156 suites on Star Pride feel more like hotel suites than traditional cruise cabins. Each has separate sitting and sleeping areas separated by curtains, a large walk-in closet, and large double-sink bathrooms. Choices among the basic suites include staterooms with French balconies, large picture windows, or portholes.

Most of the suites on the ship are nearly identical, so position may be a deciding factor when choosing a suite. Keep in mind that the farther forward the room is, the more movement you will feel in rough waters. Room numbers begin at the front of the ship, so for mid-ship stability, look for staterooms ending in thirty or higher.

There truly are no rooms/cabins to avoid on Star Pride, but a word of caution is in order regarding suites 400 and 401. These are Oceanview staterooms, with an unusual shape due to the curve of bow of the ship. Guests we met enjoyed the slight change of floorplan but warned of early morning anchor chain noise on the days the ship anchored in port.

Beyond the basic 277-square-foot suites, Star Pride features a handful of larger suites. The two Owner’s Suites can even be connected to neighboring rooms, creating Grand Owner’s Suites in either two- or three-bedroom versions. Throughout the ship, selected pairs of suites share a common vestibule with a door that can be closed to create connecting staterooms.

During its stretching, Star Pride gained a Spanish cuisine restaurant (Cuadro 44) and a world-class outdoor grill eatery (Star Grill). Both are chef inspired and help boost the ship’s options for all three meals. For example, during our sailing, the Star Grill served a daily grab-and-go breakfast that fell neatly into the niche between the full buffet breakfast served in The Veranda and the continental bites served at the Yacht Club coffee counter.

As interesting (and tasty) as Cuadro 44 is, it can’t outshine Candles, Windstar’s famous steakhouse style, reservations-only dining experience held on the aft deck of The Veranda. You know you’re in for a memorable meal when they let you choose your cutting utensil from a custom wooden box.

For the most up-to-date testing, masking, and vaccination requirements aboard Star Pride, please refer to Windstar Cruises. You can also refer to Cruise Critic’s guide to masking requirements on the world’s major cruise lines as we know them.

Costs Not Included In Your Cruise Fare on Star Pride:

Most Star Pride passengers are American, with a fair amount hailing from Canada and Australia. You'll also find cruisers from Mexico, South America and a mix of European countries.

Most passengers are fit and active. They are typically well-traveled and sophisticated, but not snobbish. Ages range from 30 to 75, with the majority averaging between age 40 and 65. Most Star Pride cruisers are couples, but you’ll also see singles, friend pairs, and in summer, families with teens and tweens. Windstar does not allow children under age 8.

While there are four ADA friendly suites and most of the ship is accessible, boarding and disembarking require the ability to climb a single flight of stairs.

Get Star Pride price drops
250,000+ people have entered their email

Where does Windstar Star Pride sail from?

Where does Windstar Star Pride sail to?

How much does it cost to go on Windstar Star Pride?

Cruises on Windstar Star Pride start from $2,099 per person.

Is Windstar Star Pride a good ship to cruise on?

Back to the Pride, Windstar Cruise, Review, Star Pride, Around Iceland, July 2022

My wife and I recently enjoyed a cruise on the Windstar’s Star Pride. We had traveled on board the Seabourn Pride many years ago and thoroughly enjoyed the experience.Read More
frickwg

When we ran across the smaller Windstar Star Pride online and its itinerary (Greece/Italy), we decided to take the chance.Read More
Newbie Travelers

Exceptional experience for this 1st-time cruiser

But, I discovered Windstar and we decided to book the newly renovated Star Pride since it only holds 312 passengers. I am so glad we did because this was the BEST vacation we ever had.Read More
csmith2558

• Never sailed Star Pride under its previous incarnations as Seaborne Pride or as Star Pride prior to its “stretching”, so we have nothing to compare its previous ownership or configuration.Read More
ryndam