Quantum of the Seas Review 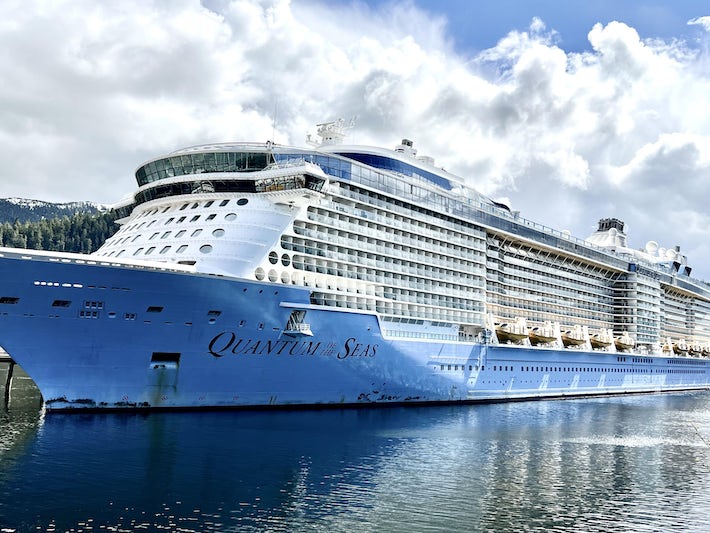 Time has been kind to Quantum of the Seas since it launched in 2014 and spent time mostly in Asia. Its ground-breaking technology is far from outdated. Cruisers are still enthusiastic about soaring 300 feet above sea level in the North Star gondola attached to a mechanical arm. Nobody is tired yet of flying in one of only five skydiving simulators on Royal Caribbean ships. Plus, bumper cars, laser tag, and circus school – just because you can. As for entertainment, the Two70 interactive venue is one of the most technologically advanced spaces of its kind at sea, unique to Quantum and Quantum Ultra class ships.

It’s a ship that feels built for cold-weather cruising in Alaska, with its indoor family pool and adults-only solarium, but it has enough spectacle to satisfy passengers of all ages no matter where it sails.

Quantum of the Seas Deck Plan Wraps Up Indoor Fun

The exterior of Quantum of the Seas gets your attention right from the start. Between the 30-foot magenta polar bear climbing the upper outdoor structure and the intrigue of the North Star pod, passengers are pulled into an exploration of the whimsical right away.

The play starts with the massive indoor SeaPlex, complete with bumper cars casually parked on racks waiting for deployment as if that’s an everyday occurrence on a cruise ship. The relaxation counterpoint to all that playtime is the Zen-like multi-deck Solarium with its stunning forward view of the bow. A short gap of outdoor pool and splash zone connects the upper deck spaces to the Windjammer Café, making it a seamless process to break for food replenishment before returning to your endeavors.

Quantum’s Royal Esplanade on Decks 4 and 5, though smaller in scale than the promenades on other Royal Caribbean ships, acts as a passageway to everything else you need within the ship, from food to shows. It feels like a slightly curved two-story mall with sleek lines and lighting that just feels good, as if sunshine was flooding in from somewhere.

Deck 3 serves almost as overflow for the public decks above it, catching two of the four main dining rooms, a large Casino Royale, the lower floor of The Music Hall (which is an eclectic surprise in its own right) and the lower floor of the Royal Theatre. It’s the only deck where loud public attractions and staterooms potentially clash, as the remaining stateroom decks are primarily secluded from public spaces, leaving them quiet and peaceful.

Quantum of the Seas Has Cabin Surprises in Store

On a ship where 75% of the rooms have balconies, one would expect a boring line up of cookie-cutter rooms with nothing distinguishing one from another. But there’s nothing boring about the cabin choices on this ship.

From pioneering virtual balconies in interior rooms to two-story loft suites, every stateroom category has options – whether it’s an intriguing placement within the ship, how one stateroom connects to another, or a shape that doesn’t match the traditional cruise ship cabin footprint.

The best staterooms on Quantum are the ones that position you and your travel party near the things you came for. If it’s ocean scenery, you’re going to be fine almost anywhere. If you came to hang with your people, there are staterooms that connect like jigsaw puzzles, tucked away behind their own vestibule doors – creating your own private enclave. If your kids are spending all their time in Adventure Ocean activities, the best spot for you might be near AO on Decks 11 or 12. And of course, if you cruise to spa, pick any deck, but consider a cabin near the forward elevators which will whisk you to your treatments.

Are there rooms/cabins to avoid on Quantum? Consider most of the obstructed balcony cabins a last choice unless the price is right. Sure, you’ll have a balcony to sit on to enjoy the sea breezes and hear the ocean waves. But unfortunately, your view of the water below will be blocked by lifeboats.

Look for "Food Secrets" on Quantum of the Seas

Quantum’s main dining rooms aren’t secret. They come as a four-pack of restaurants on Decks 3 and 4, each with a name denoting its décor, while sharing the same menu. Windjammer Café on Deck 14 stretches for what feels like an acre, featuring food stations near the front and seating along the windows and across the back of the ship, including some almost secret outdoor tables.

Specialty restaurants that incur an extra charge and a la carte food in unusual spots like the bar bites menu in Harp & Horn are not to be missed. On our sailing with a fresh crew, we found the specialty dining food and service was often superior to the included choices.

You might miss some options simply because they feel tucked away in corners. You’ll find yourself surprised at the array of soups and sandwiches (including the line’s famous Kummelweck roast beef sandwiches) available in Café Two70. You may be equally as surprised to discover the takeaway trays of crispy fish (or chicken) and chips from the corner eatery next to the outdoor pool (port side) – still cleverly disguised as an Asian noodle shop.

We’re assuming the signage will eventually be corrected to its new name: Splash Away.

One last hidden food spot to seek: If juicy hot dogs while watching soccer, roller skating, or hoops sounds fun, check the schedule for your favorite spectator activity then go top your dog (yes, they have kraut) and enjoy the fun surrounding SeaPlex Doghouse.

Quantum of the Seas COVID-19 Rules

For the most up-to-date testing, masking, and vaccination requirements aboard Quantum of the Seas, please refer to Royal Caribbean's health and safety protocols. You can also refer to Cruise Critic's guide to masking requirements on the world's major cruise lines.

Ideal ship for cruising in regions where extra indoor space is prized.

Food quality is spotty. You have to work at finding the really good stuff.

Great ship for families, with a wide range of activities and food choices.

Costs Included on Quantum of the Seas:

Costs Not included on Quantum of the Seas:

Who Is On Board Quantum of the Seas?

Passengers on Quantum’s Alaska itineraries are primarily North American, with some international passengers. The language onboard, including on signage, is English. Families traveling with children of all ages make up a large portion of Alaska passengers, and Quantum’s attractions will make it popular for families no matter where it sails. Solo travelers and couples in the age range of 30 to 60 make up most of the remaining passenger load.

Following summer in Alaska, Quantum moves to summer in Australia, New Zealand, and the South Pacific, likely making it popular with family cruisers down under. Passenger country of origin should mirror the change of hemispheres, with a few wandering Americans in the mix.

Get Quantum of the Seas price drops
250,000+ people have entered their email

Find a Quantum of the Seas Cruise from $329

More about Royal Caribbean Quantum of the Seas

Where does Royal Caribbean Quantum of the Seas sail from?

Royal Caribbean Quantum of the Seas departs from Brisbane, Seattle, Vancouver, and Honolulu

Where does Royal Caribbean Quantum of the Seas sail to?

How much does it cost to go on Royal Caribbean Quantum of the Seas?

Cruises on Royal Caribbean Quantum of the Seas start from $329 per person.

Is Royal Caribbean Quantum of the Seas a good ship to cruise on?

Amazing Scenery. Great Food and Activities, Shows were lacking, and 2 staff members only cared about $

The benefit of being on a large ship like Quantum was that they constantly had activities for all of us to enjoy.Read More
bbarrick

The benefit of being on a large ship like Quantum was that they constantly had activities for all of us to enjoy.Read More
bbarrick

Just returned from 7 not Cruise on Quantum. Overall, we (me, husband and young adult son) really enjoyed the ship.Read More
FLfamoffour

My girlfriend had never been to Alaska (me 5 times) and since Royal Caribbean is our favorite cruise line (me - 77 cruises so far) we chose the Quantum.Read More
gdlitzie