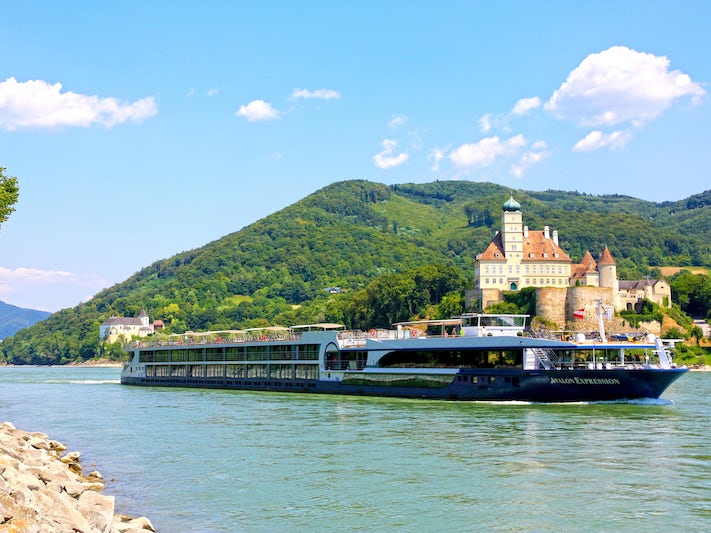 Avalon Expression joined Avalon Waterways in May 2013.Itineraries focus on the Danube River with sailings from Amsterdam to Budapest and Budapest to Prague.

Here's what you can expect onboard:

Sixty-four 200-square-foot Panorama Suites -- or two decks' worth -- have wall-to-wall panoramic windows, which open seven feet to create an open-air balcony of sorts. Two 300-square-foot Royal Suites will offer an even wider view. The remaining 16 cabins are 172 square feet and have picture windows.

Cabin amenities include flat-screen satellite TV, radio, minibar, safe and hair dryers. Beds can be configured into two twins or one queen and come with choice of firm or soft pillows and duvets and Egyptian cotton linens. Royal suite occupants also get usage of in-suite complimentary iPads.

Avalon Expression has four decks, including a sky deck for sunning and relaxing by the whirlpool. The sky deck also boasts an open-air bistro. There are multiple lounges, an open-seating dining room, an Internet corner, a hairdresser and manicurist, and an small fitness center. Wi-Fi is free throughout the ship. Smoking is not permitted in interior areas. An onboard elevator is available for passenger use.

In addition to meals and accommodations, sightseeing excursions led by local guides, onboard lectures and piano entertainment, and wine with dinners are included in the fare. Avalon Waterways appeals to mostly English speaking passengers in the 55-plus range.

Pictured above is a Royal Suite onboard Avalon Expression.

Get Avalon Expression price drops
250,000+ people have entered their email

Find an Avalon Expression Cruise from $2,306