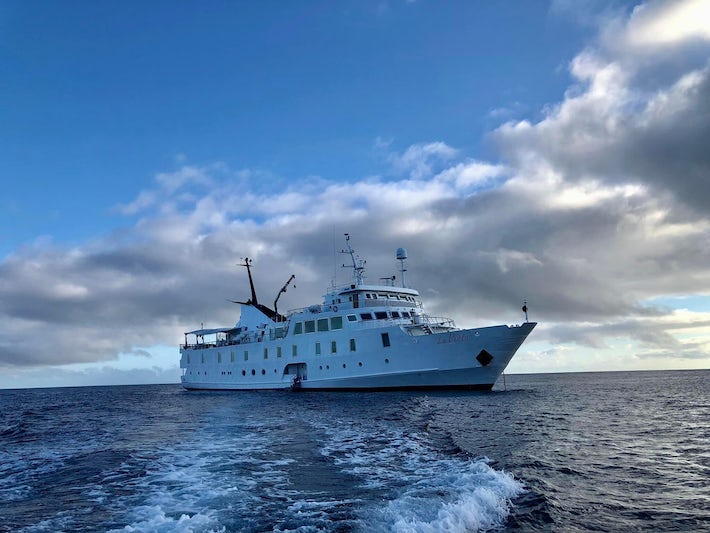 Metropolitan Touring's 48-passenger La Pinta is a year-round Galapagos-based island hopper that was significantly refurbished at the tail-end of 2019. The cruise yacht -- considered mid-size among the 100 or so 12- to 100-passenger vessels cruising the region -- provides an effortless means of experiencing the menagerie of reptiles, birds and marine mammals the Ecuadorian hotspot is famous for.

While no manmade ship will ever compete with Darwin's favorite national park -- where rust colored calderas jut out of the Pacific; stoic, yellow iguanas guard fruit-laden cactus trees; and blue-footed birds dance and whistle their way to progeny -- La Pinta exceeds the basic requirement to introduce well-traveled, pretense-free passengers to sea lions and sea turtles.

La Pinta, built in 1982 as a Bahamas-based casino ship, then gutted and rebuilt in 2008, also fulfills its duty as a modern expedition vessel. Tools of the trade include outdoor shower heads (de-sanding), a public-use dryer (for wet towels, swimming trunks), a goodie basket of Dramamine motion sickness medicine in the lobby, a quintet of tandem kayaks, snorkel gear (mask, fin, snorkel), a briefing room with modern audio visual equipment and a crane that delivers a trio of pangas (inflatable water taxis) from ship to sea.

Recent upgrades include new carpeting and lighting throughout the cabins and public areas, coupled with extensive improvements. The new-look reception and lobby area on the Main Deck has benches for passengers waiting to disembark, along with updated lighting, decor and display cabinet of Ecuadorian jewelry. The dining room, also on the Main Deck, has new furniture, a marble-topped buffet and is decorated with a display of colorful limited edition prints by Ecuadorian artist Paula Barragan. On the middle Cabin Deck, staterooms have benefited from new furniture -- including closets, desks and leather chairs -- along with new drapes, headboards and artworks.

On the top Boat Deck the forward Observation Bar & Lounge has brand new earth tone furnishings, including sofas, banquettes and chairs, and the former library is now an expedition room. Outside, the sun deck has an improved canvas awning and a renovated bar and buffet area for alfresco dining.

Touches like fine in-cabin showers, Wi-Fi and a glass-bottom boat (for non-snorkelers and the sea lion-phobic) are welcome inclusions. After a day peeking under the Pacific or trekking under the equatorial sun, passengers can chat in the popular top-ship hot tub or enjoy a pre-dinner pisco sour in the lounge as they swap pictures (the world's most adorable baby sea lion, say) and stories ("The baby sea lion thought I was its mother!").

There's also the occasional traditional cruise flourish. Observe the sun glasses-wearing towel monkey endemic to your cabin or the Beef Wellington that appears on the dinner menu.

If the pangas, inflatable water taxis that shuttle passengers from anchorage points to uninhabited islets, are the connective tissue of the experience, the top-flight naturalists (Level III, the highest in the Galapagos) are the heart. By law, the English (and other) language-speaking guides accompany passengers on all land-based expeditions, providing enthusiastic commentary and answering questions about local geology, botany and biology. They're great with kids, too.

As part of Metropolitan Touring's commitment to the environment, the company uses a silicone-based paint on the hull of La Pinta which last five years (as opposed to the normal two for other types of marine paint) and is not harmful to marine life. The company says it also decreases drag, thereby improving propeller efficiency and reducing fuel consumption by some five percent over two years. The new lighting throughout the ship is LED, with a lifespan said to be 25 times greater than incandescent bulbs. The lights also emit less heat, therefore reducing air conditioning consumption.

The overall experience on La Pinta (and every other Galapagos-based ship) is highly structured, almost military-like. (Though you can opt out of anything if you choose. ) It has to be. In an effort to maximize time on land, where opening hours are sunrise to sunset, scheduling is precise. Wake up: 0700. Breakfast: 0730. First landing: 0830. And so forth until you hit the pillow after dinner (at 1930). If you participate in every activity, expect two hours of down time tops -- and expect to be enthralled but slightly exhausted by debarkation day. Something more casual post-cruise, like a beach stay, is a good idea for two reasons: first, as a counterpoint to the hyper-scheduled pace, second, to unpack the mystical experience you just had, spending time in a place that starts to feel like a strange dream the moment you return to civilization.

A good choice for active, adventurous cruisers seeking to go in-depth in the Galapagos

For much of the year, La Pinta attracts a well-traveled, highly educated babyboom-and-beyond set. Passengers are generally fairly active, as the ship doesn't have facilities for those with mobility issues. Navigating the steep steps, metal lips and "watch your head" spaces is part of the expedition ship game plan. During June, July and August, expect an influx of parents and their offspring.

Metropolitan Touring puts it well: the dress code on La Pinta is casual and ultra-casual. The packing list is dictated by the itinerary, where quick-dry pants, rubber-soled waterproof shoes and wide-brimmed floppy hats are more important than blue blazers and oxfords.

Still, for dinner, some passengers take a post-excursion shower and throw on a clean shirt or sundress. The only requirement for the dining room is to have something on your feet and some manner of top. (Don't forget your pants, too.)

The naturalists were well spoken and answered all questions at any time.December is not the correct time to come for snorkeling, water is pretty rough and cloudy.Read More
recentretiree2017

We had the most amazing trip on Yacht La Pinta in February 2017.Read More
sneale

We found the ship to be an ideal size 24 rooms each with a large window, 48 passengers and a total of 32 ish crew (including crew members and naturalists).There was one daily event that was awkwardly timed: Regrettably, the educational talk given in the bar area at the top of the gently rocking ship came after a physically active morning and a full meal at lunch.Read More
MrsAAM

Wonderful ship, crew and itinerary... we loved this trip

The trip was everything we wanted and I wouldn't hesitate to recommend La Pinta.Read More
RDEwing