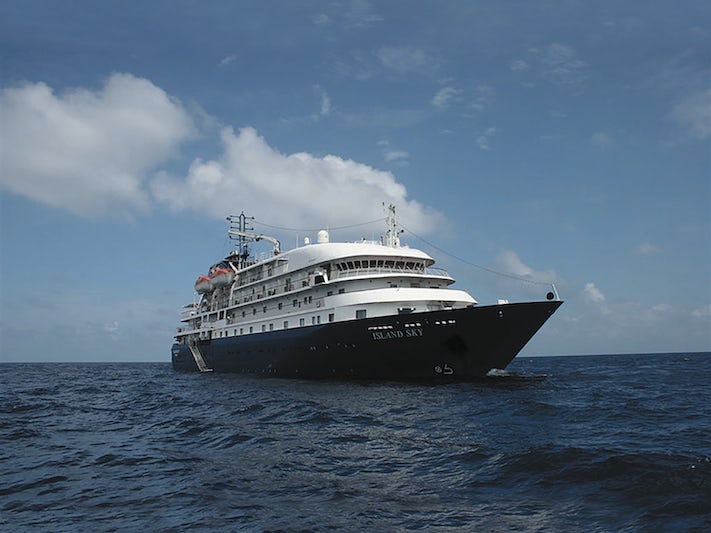 A former Renaissance Cruises expedition ship, Island Sky joined Noble Caledonia in 1992 and helped establish the company's reputation for quality, luxurious expedition cruises in predominantly northern hemisphere destinations. The 91-metre-long ship was extensively modernised and refurbished in 2010 and continues to enjoy top reviews from both critics and her legion of repeat cruisers

Seven categories of cabins, spread across five passenger decks, range from Standard Suites (with portholes) to Deluxe Balcony Suites and Owner's Balcony Suites. All of these rooms are almost the same size, but prices vary according to location on the ship and the size of the windows.

Cruisers embark and disembark for Zodiac excursions from the rear transom/marina.

Fellow passengers are almost all Brits (apart from a handful of Australians) and almost all 60 or older. They're well-travelled and well-informed, mostly retired professionals with a keen interest in culture. There were a few single ladies on my cruise, as well as a couple of younger women who were accompanying their mothers. Friendship groups formed quickly, as they do when you're on tour all day and dining together at every meal. Almost everybody I spoke with had sailed or travelled with Noble Caledonia before, and without exception, people considered Island Sky as big a ship as they would enjoy. A few had sailed with Viking River Cruises, Star Clippers, Spirit of Adventure and on Noble Caledonia's other trips, while others alternated Island Sky cruises and land-based tours. There was a great sense of fun and camaraderie, and on some nights, the dancing in The Club went on late.

The dress code is completely relaxed. Smart-casual day and night is the norm, apart from the Captain's Welcome and Captain's Farewell, when people dressed up a bit more. Good walking shoes are essential, as the included shore excursions are pretty intense and long. (Some people brought walking poles, too.)

Is there a better small cruise ship?

the expedition staff are excellent and so enthusiastic.If I had a criticism I would say that some of the itinerary was a bit samey and the expedition team a little over enthusiastic about what we might and did see.Read More
sjahants

Check the details of the cruise

From what it seems to me the Island Sky does not have side/front/rear thrusters on it's ship to be able to assist with docking and getting the Ship through small spaces.Read More
grey traveller

I chose the cruise because of it being a small ship that would transit the Corinth Canal and I had enjoyed a previous cruise on island Sky.Read More
jpp4