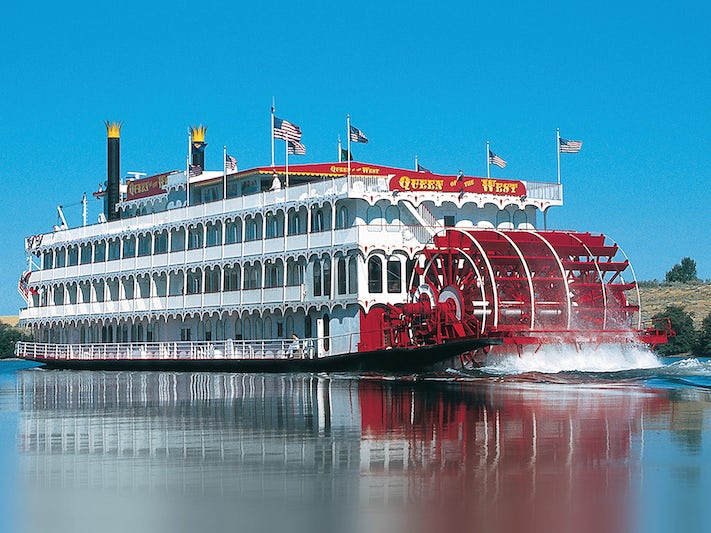 The 120-passenger American West, formerly Queen of the West, cruises the Columbia and Snake rivers in the Pacific Northwest. Itineraries include six-, seven- and 14-night sailings from Portland, Oregon. First launched in 1995, the ship underwent a multi-million-dollar renovation in 2011, which included the addition of private balconies, a new library on the third deck, and the conversion of several cabins into singles..

The 230-foot ship is propelled by a three-story-high churning paddlewheel. But unlike earlier paddlewheelers, American West doesn't rely on a steam engine. Instead, it is powered by a revolutionary hydraulic propulsion system that uses environmentally safe biodegradable hydraulic oil. The new "authentic" paddlewheel provides a quieter and smoother ride, with less impact on the environment.

Another unique feature: A 45-foot-long bow ramp allows passengers to go ashore anywhere along the river, much as the 19th-century vessels did. Passengers can take a shore excursion sponsored by the cruise line or arrange their own outing in ports.

Emphasis onboard is on scenery, culture and camaraderie. Experts are brought aboard to inform and entertain, often focusing on regional history or traditions. All meals, which feature fresh meats and seafood, and in-season fruits and veggies, are taken in one open seating.

Some 60 percent of the cabins feature balconies, and all have flat-screen satellite TV's and DVD players. There are 12 cabins for solo travelers.