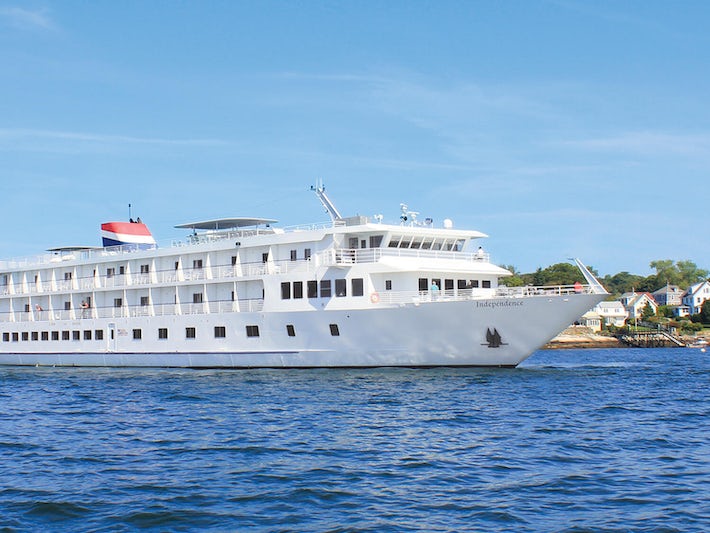 Operated by American Cruise Lines, which has the largest fleet of U.S-flagged and crewed cruise ships and river vessels in the country, the 100-passenger American Independence is one of the line's three Independence-class vessels. It offers a relaxed way for U.S. passengers to explore the southeast, such as the stretch of the Intracoastal Waterway from Florida to South Carolina, and for overseas cruisers to immerse themselves in American history and culture and discover the country's lesser-known waterways.

The four-deck vessel, launched in 2010, is one of the oldest ships in the expanding and modern ACL fleet. However, it offers a very cozy and intimate small ship experience that attracts a high number of repeat passengers, mostly seniors, looking to combine exploration with a laid-back onboard vibe.

Cabins are all outside-facing, the majority with private balconies, and the ship has three lounges, a good-size sun deck and one restaurant offering flexible dining times. Cheerful and helpful crew members provide high levels of personal service. Fares cover a large number of inclusions, such as shore tours in selected ports, all drinks and gratuities.

American Independence, and sister ship American Star, cruise the Southeast in spring and fall and in summer relocate to the East Coast with itineraries in Chesapeake Bay, Maine coast and Hudson River.

The social hub of American Independence is the multi-function Chesapeake Lounge located forward on Deck 2. Days start here with an early riser breakfast and throughout the day the lounge is used for talks, activities, the daily cocktail hour and port presentation, plus after-dinner entertainment. There are also two smaller and quieter lounges, on Deck 2 and 3, along with space up on the sundeck to lounge, read, chat to fellow passengers over a coffee or watch the passing scenery.

The size of the vessel, combined with the open seating at mealtimes, makes American Independence a very sociable vessel. Solo travelers will quickly find new friends and nothing ever feels rushed, meaning the crew members can take time out to chat or answer any questions. The lack of any formal dress code, or formal dinner, also helps create a relaxed and convivial atmosphere.

This isn't a ship for party animals as there is no entertainment, aside from nightly music, and a standard bar set up. This means most folks opt for an early night after the show.

Situated across three decks, American Independence features a choice of five cabin grades which are all large for a ship of this size, including single cabins that measure a spacious 248 square foot and also have private balconies.

All accommodations on the ship face the outdoors. They lead in with cabins on the lowest Main Deck which are 258 square foot and have large picture windows that slide open. The majority of cabins are classified as AAL and AAC Private Balcony staterooms, respectively situated on Deck 2 and Deck 3 with the AAC staterooms being slightly larger. They all have full walk-out verandas with a table and chairs. There are three 350-square-feet Owner's Suites -- one on Deck 2 and a pair on Deck 3 -- which come with extra perks.

All of the cabins are well equipped with plenty of storage space and bathrooms are stocked with premium toiletries. Beds are very comfortable and can be configured as doubles or twins.

There is one accessible cabin, number 213, which is large enough to accommodate a wheelchair and is conveniently situated next to the elevator on Deck 2 and on the same level as the main lounge.

American Independence Food is Tasty and There's Plenty of It

You won't get hungry on this ship, that's for sure. There is one restaurant where all meals are served. Food is imaginative and well-presented and if you haven't got a big appetite you can get half portions. In between there are snacks available throughout the day in the Chesapeake Lounge and canapes are served here before dinner. Every morning and afternoon there are fresh-baked cookies and to make sure you don't miss out staff walk round the ship to tempt any passengers sitting in the smaller lounges or other public areas. During the evening entertainment, fresh popcorn is served in the lounge.

For the most up-to-date testing, masking, and vaccination requirements aboard American Independence, please refer to American Cruise Line’s health and safety protocols. You can also refer to Cruise Critic's guide to masking requirements on the world's major cruise lines.

No traditional bar for night owls

Costs Not Included in Your American Independence Fare

American Independence attracts mature and well-traveled couples and solo cruisers -- the majority over 65 and many quite a bit older (we heard of one 102-year-old passenger). There are some multi-generational families with adult children. There are also a large number of repeaters who are big fans of American Cruise Lines (one on our cruise was on his 29th sailing and many booked future cruises while onboard). You might find a sprinkling of other English-speaking nationalities such as passengers from the U.K. where cruises are now sold through Fred. River Cruises. It's rare to see young children.