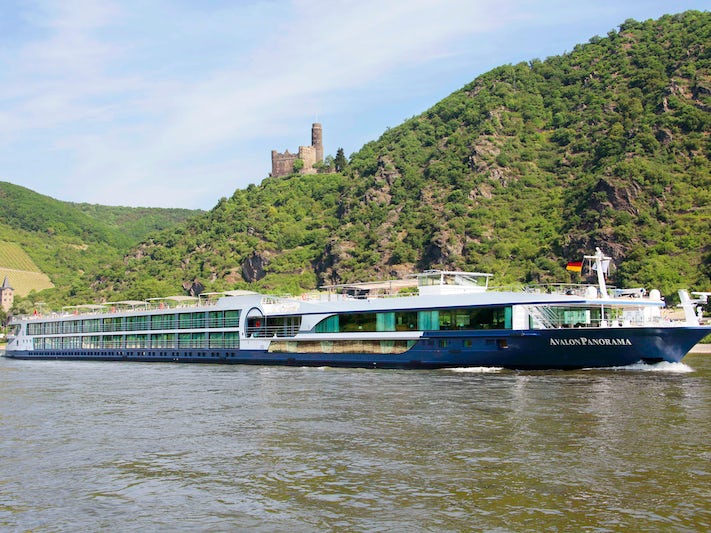 As new ships flood the burgeoning river-cruise market, each one-upping the other with better bells and more whistles, the what-will-they-think-of-next game is in full swing. Avalon Waterways' entry into the competition is 164-passenger Avalon Panorama, whose "Panorama Suite" innovation is brilliant in its simplicity.

In developing the new design, Avalon Waterways, part of the Globus family of brands, faced the obstacles that all ships plying the rivers of Europe must conquer. That is, the company wanted to provide passengers with balconies and more public open space onboard, while concurrently dealing with European river constraints. (Think varying water levels, low bridges, narrow locks and tiny docks.)

So, how did Avalon Panorama rise to the challenge? Magnificently. Each Panorama Suite features an 11-foot-wide, seven-foot-tall wall of glass that can slide to reveal a gaping, almost magical open-air expanse. When the doors are opened, take my word, you'll feel as if the entire cabin was outdoors.

Freed from having to set aside space for dedicated outdoor balconies, the 200-square-foot Panorama Suites are 15 percent larger than many river ship cabins, allowing room in each for a queen bed, a small couch, table and chair. It's no surprise that reaction has been positive.

Public gathering spaces have also been maxed out on the 443-foot-long, 37.4-foot-wide ship with four decks. In addition to the shiplong sky deck, there's a large indoor lounge, a smaller indoor club lounge and an outdoor covered seating area in the front of the ship, perfect for open-air sightseeing on rainy days.

Interior design is contemporary chic, with lots of dark espresso woods highlighted with colorful modern art and deep orange rugs and furniture. Think Scandinavian rather than French Provincial. A French influence can be felt, however, in the high-quality L'Occitane bath products -- which sport a delicious lemon verbena scent -- and the fine wines, such as a full-bodied Cotes de Roussillon from the south of France.

The mostly Eastern European staff was generally efficient and pleasant, although not all spoke fluent English. Knowledgeable, English-speaking local guides led shore excursions (at least one daily excursion was included), and the excursions were enhanced with the use of wireless headsets.

While the ship markets almost exclusively to passengers from the U.S., Canada, Australia and New Zealand, it retains some not-so-welcome European influences, including 220-volt outlets, mostly German-speaking TV channels and the euro as ship currency, which, because it is strong against the dollar, means higher gratuity and drink costs. But, those are minor complaints.

A recent five-night preview cruise on the Rhine and Moselle rivers was a nice taste of what passengers will experience on Panorama's usual 14-night sailings between Amsterdam and Budapest. (Shorter Christmas market cruises will also be offered.) The ship docks at a different place each day and cruises mostly at night, with daytime sailings confined to exceptionally scenic portions of the journey. Included morning walking tours instantly familiarize passengers with the typically small towns, and within a few hours, it's easy to feel a real affinity for each village's markets, churches and riverfront walking paths. The leisurely rhythm of the region's slower pace of life is impossible to resist, and in just a few days, drinking an afternoon beverage among the regulars at the local Biergarten or buying a hunk of fresh farm cheese from a market stand becomes second nature.

The ship, with its 14-night Magnificent Europe itinerary between Budapest and Amsterdam (except for shorter Christmas market sailings), appeals to retired Americans and Canadians, with an average age of about 60. The ship has also been heavily marketed in Australia and New Zealand, whose citizens tend to take longer vacations when visiting Europe. About 50 percent of Panorama's existing bookings are Australians, which may skew the average age lower, as Avalon's passengers are typically only about 25 percent Australian.

Country-club casual is the order of the day. Leave the jeans and T-shirts, as well as the opulent evening gowns and tuxes, at home. At dinner, understated cocktail dresses and jackets (sans ties) are appropriate. Bring good walking shoes.

Get Avalon Panorama price drops
250,000+ people have entered their email

Find an Avalon Panorama Cruise from $1,999

Where does Avalon Panorama sail from?

Where does Avalon Panorama sail to?

How much does it cost to go on Avalon Panorama?

We chose Avalon Panorama for our first ever river cruise. We flew from the UK to Basel, stayed the night before in St Louis & joined the ship next day.Read More
ighten

Avalon Panorama was a fantastic introduction to this new style of vacation. We really enjoyed the staff, boat and overall experience of a week on a river.Read More
goodvino808

Amsterdam-Basel - Avalon are functional, but AMA are fun!

- by the way the Captain on the Avalon Panorama was rarely seen and no Captain's Table).Read More
kentcouple65

Christmas Markets on the Rhine

We would definitely cruise on Avalon again.We look forward to taking another cruise next year if not sooner.Read More
MJMorgan3r