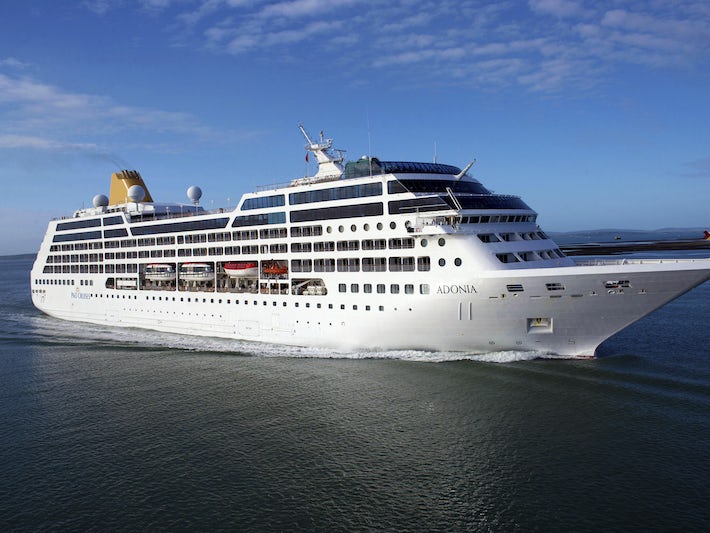 Editor's Note: Adonia sailed its final voyage for P&O Cruises in February 2018 after which it was handed over to Azamara and rebranded as Azamara Pursuit.

The smallest ship of the P&O Cruises fleet, Adonia was named, or rather, re-named, in May 2011. The ship was actually built in 2001 as R8, the eighth in a series of vessels commissioned by the now-defunct Renaissance Cruises. In its time, Adonia has sailed both as Minerva 2 for Swan Hellenic and Royal Princess for Princess Cruises.

Adonia's seven sisters are scattered across the fleets of Oceania Cruises, Azamara Club Cruises and Princess Cruises, all lines that have made adaptations of their own to these eight identical vessels. But some of the original features in the series were so strong that most lines, including P&O Cruises, have kept them: a sweeping staircase opening grandly into the lobby, an elegant library with a faux fireplace and trompe d'oeil ceiling and space aft of the sun deck for two alternative dining venues with sweeping views over the ship's wake.

What's significant about Adonia for P&O Cruises is the fact that it's a ship going back to the line's Middle England roots, rather than trying to be something flashy and feature-packed like Azura, the last new-build for the company. On Adonia, there's ballroom-dancing, afternoon tea, thought-provoking lectures and no kids. This is an adults-only ship, like Arcadia and, from November 2011, Oriana, with grownup entertainment.

The ship underwent a makeover before its U.K. debut in the Bahamas. Royal Princess got the P&O Cruises treatment and emerged with the trademark yellow funnel and a few changes to the interiors: a clubby Anderson's lounge, where Princess had a casino; two beautiful, new alternative restaurants; and, all-important for British cruisers, a full set of tea-making equipment for the cabins.

The idea is that Adonia will sail longer, more in-depth itineraries than the standard range of ex-Southampton cruises offered by its big sisters, calling at out-of-the-way ports and offering a wide range of shore excursions. It's true that, on my Norwegian fjords cruise, there was a particularly wide choice of tours, given the small size of the ship, with an enthusiastic take-up.

When a small ship works well, there's a marvellous camaraderie among passengers, and between passengers and crew. Certainly, the service on my cruise was outstanding. The crew seemed content, and many went out of their way to offer service beyond the call of duty. Waiters learn passengers' names quickly, while bartenders make time to chat. Yes, there were a couple of niggles; some of the entertainment (quizzes and deck parties, in particular) was a bit laboured, and not all passengers were happy with the presentation of their cabins. But generally, Adonia seems almost the perfect size of ship: big enough to have plenty of facilities, but small enough to feel like home.

Expect fellow travelling companions to be 50-plus, almost exclusively British P&O Cruises stalwarts. They'll be from Middle England, well-off, well-travelled and the kinds of people who wouldn't be seen dead on huge, modern ships. A lot had travelled on Artemis, Adonia's predecessor, and some had tried Arcadia, one of the line's other adults-only ships. (The third is Oriana, from November 2011). On my cruise, there was one party of Canadians amidst a sea of Brits. Most people were travelling with a partner, but there were some singles accompanying elderly parents or travelling with a friend.

I saw lots of walking boots and walking poles on my Norway cruise. A lot of people were clearly keeping active. One man, who must have been in his seventies, raced ashore in every port in running gear and was covering several miles each time. The gym was often busy, and all the lectures I went to were packed. Adonia's passengers may not be night owls, but they certainly make the most of everything by day.

Think traditional: smart casual during the day, followed by a strict dress code at night. There are three dress codes, recently renamed and simplified by P&O Cruises across its fleet: Evening Casual on six nights out of a 14-night cruise (which, on most cruises, incorporates theme nights -- black and white, tropical, sixties or seventies); Smart, which means jacket for men (but not necessarily ties) and happens four nights out of 14; and Black Tie, on a further four nights, which is tuxedos (or dark suits) for men and posh frocks for women. Everybody tended to dress up for formal nights, although more women wore short than full length. There isn't really an option to avoid formal night, as casual dining is only offered a few nights per cruise. Room service is also a bit sad in the not overly spacious cabins -- and the offerings are fairly rudimentary.

Pictures are displayed at the entrance to each dining venue, just in case anybody needs reminding. Passengers who do not conform won't be allowed into the bars and main restaurant. The dress code comes into force from 6 p.m., which is a good idea, as the smart atmosphere isn't diluted by people still in their shorts.

P & O have stated that because the Adonia is being sold, the last 6 months cruises will be extra special. What were they like before ??Read More
73trident

Pity it has been sold

We sailed on her 2 months earlier as well, and were disappointed to hear that P & O had sold Adonia and that all cruises have been cancelled from the beginning of March next year.Read More
consub

Loved the layout and decor of Adonia. The service in restaurants was excellent, cabin steward was also very good.Read More
joyrene