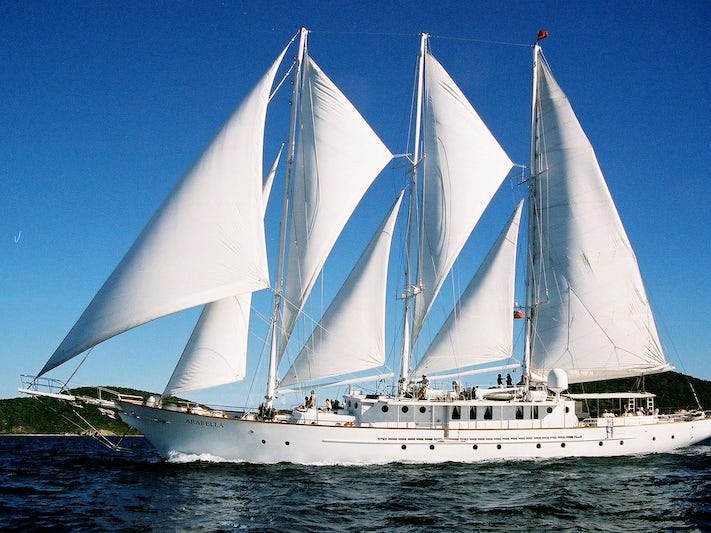 Wherever it sails, the tall ship Arabella draws a crowd. And that's no surprise. Elegant yet workmanlike, this snappy schooner is a looker. Well-known in sailing circles (but under the radar of many mainstream cruisers), Arabella is creating a buzz that is only getting louder.

As we sailed Arabella under the Chesapeake Bay Bridge with the wind blowing 30 knots, passengers happily got soaked as waves screamed against the bow. One woman, talking into her cell phone, shouted: "You want to hear the ocean?" On her face was a look of pure bliss.

First and foremost, cruising on Arabella -- in the Caribbean, New England and the Chesapeake Bay -- is an outdoor experience. This 160-foot-long tall ship with eight sails flies when the wind is just right. "Soft adventure" the owners rightly call it. It is definitely the wind-in-your-hair sailing that brings loyalists back to Arabella again and again. And, since the Windjammer Barefoot line went dark in 2007, Arabella's popularity quotient has shot up even more. Not coincidentally, Arabella has extended its sailing season to meet the heightened demand.

There's a lot to like that goes beyond the sail: unpretentious and excellent concierge service; up-close access to ports; and a genuine camaraderie among passengers and crew that seemed on our five-night cruise to develop almost instantly. Within moments of arriving onboard, passengers and crew operate on a first-name basis.

What you won't find on Arabella are roomy cabins or chichi cuisine. Shipboard enrichment lectures aren't part of the travel experience. Neither is entertainment. (Although ask Sandy Sunderland, Arabella's captain for nearly nine years, about his dog Coco's trip through airport security, and you're in for some comedy.) And, don't look for the spa and fitness center. There isn't one.

Sailing on Arabella is a huge departure from the traditional cruising experience. This is not a floating resort that deposits hundreds or thousands of passengers at each port, often at a cruise terminal miles away from downtown. It's a spunky little ship that's nimble enough to dock in the heart of a town or anchor off the remote beaches of a Caribbean island. For example, on our Chesapeake Bay cruise, we tied up just feet from the National Aquarium in Baltimore's Inner Harbor.

And, with a maximum of 38 passengers, you'll never have to wait in lines -- another nice benefit that adds to the unhurried, relaxed rhythm of an Arabella cruise.

The ship, built in 1983 as Centurion for actress Kelly McGillis, was re-launched in 2001 after a three-year overhaul by its current owner, Rhode Island-based Atlantic Stars Hotels & Cruises. It was a massive do-over that resulted in 60 additional feet, a third mast and 20 cabins. Today, Arabella is a graceful vessel that clearly attracts people who are in it for the sail.

The New England and Chesapeake cruises attract pre-retirees and retirees, largely ranging in age from the 50's to 70's. The Caribbean itineraries, which are more physically active, tend to draw a younger clientele, as well. It's a fairly diverse bunch, geographically. On our cruise, the 23 of us represented 10 different states. Passengers, who are well-traveled and well-educated, are generally American, although the Caribbean cruises often include British and German guests, too.

Onboard attire is always casual. How casual? On our trip, one passenger showed up at breakfast most mornings in her pajamas. Crew and passengers alike often go barefoot.

We sailed Arabella for the first time in Sept/Oct 2010, for a New England cruise, and again in Feb 2011 for what the Arabella team calls "the Spanish Virgin Islands," out of St. Thomas.Read More
SailorJM

We boarded The Arabella on Sunday, Jan 30, 2011 at Red Hook on ST. Boarding the ship we were greeted by the crew and a frothy rum punch.Read More
maldenken