Lord of the Glens Review 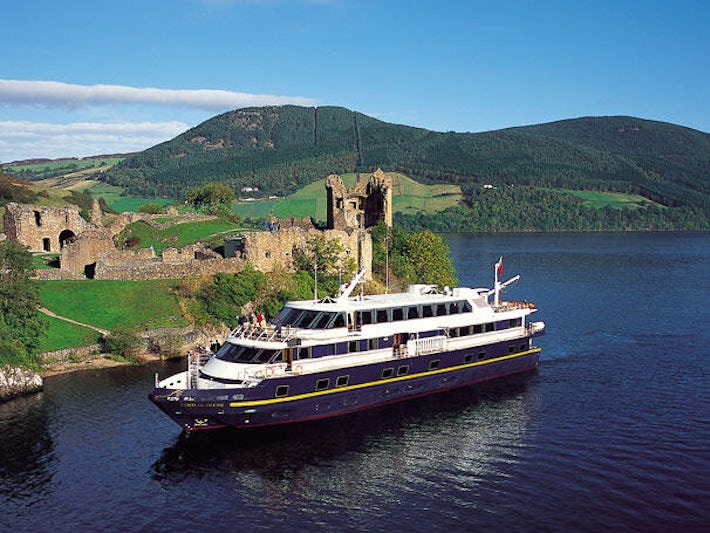 The 150-foot-long Lord of the Glens was originally built in Greece in 1985. The Magna Carta Steamship Company embarked on a major rebuild of the motor yacht after it acquired the ship. Indeed, prior to its relaunch in 2000, the vessel was completely gutted, and its interiors were designed to complement the region it serves -- the waters of Scotland's lochs and canals.

Lord of the Glens has four passenger decks. The cabins, all of which are outsides with windows (two of them with double portholes instead) span three of the decks; the top deck is used solely as public space, with two lounges, a bar and a library.

The ambience is that of a country manor-house, with warm, rich woods and overstuffed furnishings in the public spaces, teak and mahogany touches in the staterooms and expansive sun decks ("terraces"), fore and aft on the top deck. The restaurant is capable of accommodating 60 people at once, but all meals are open-seating; in other words, come when you'd like. Fine china, silver utensils and French crystal are utilized in the dining room; meals are created using the finest local ingredients, which are acquired as the yacht moves from place to place.

The staterooms are cozy at an average of 135 square feet each, but they're well-appointed and attractive. Comfortable furnishings and Highland-oriented artwork dominate the rooms, which also include in-suite facilities with showers, satellite televisions, vanity tables and stools, ai- conditioning, safe deposit boxes, music systems, internal telephones, hair dryers and robes. Beds can be configured as twins or doubles.

Itineraries involve traversing lakes and canals near Inverness and Glasgow, and -- in the summer months, when the boat is chartered by Lindblad Expeditions -- they also include Edinburgh. Excursions (which are included in the cruise price) consist of castle visits, distillery visits, a Highland steam-hauled train journey and a trip to the Loch Ness Visitor's Centre. During August, under Lindblad Expeditions' charter, itineraries also include Edinburgh's Military Tattoo. Entertainment troupes might be brought onboard for performances of Scottish song and dance.

All rooms are double-occupancy; singles pricing is available on request. Neither the vessel nor the journey is appropriate for young children. Most guests are between 45 and 65 years old, enjoy a refined atmosphere and fine dining, don't mind dressing up a bit for the Captain's dinner and want to learn about the history and culture of the region. The four-night journeys attract a mostly European crowd, as they visit the British Isles; the longer trips, booked through Lindblad Expeditions, are comprised primarily of U.S. and Canadian travelers.

Get Lord of the Glens price drops
250,000+ people have entered their email

Find a Lord of the Glens Cruise