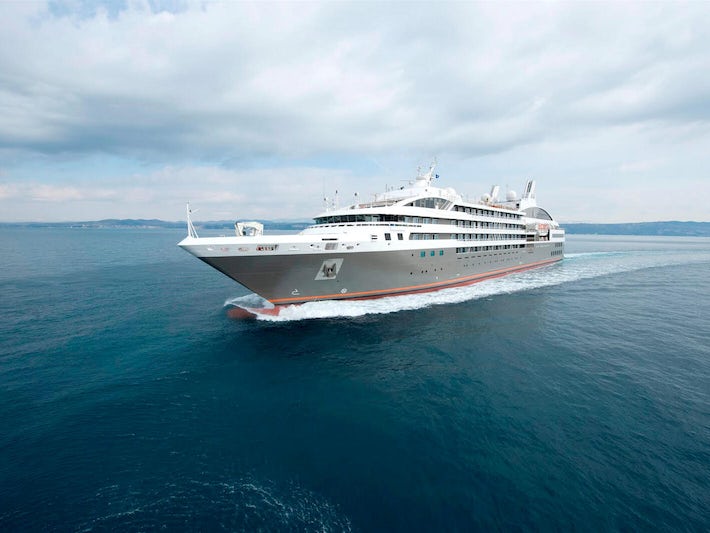 Le Boreal, like other ships of its class in the Ponant fleet, is a stunning vessel, with sleek lines and an unusual dark-gray hull that makes it stand out in port. Capable of expedition sailing, the ship has an upscale feel that is unashamedly French: It's chic, the service can be a little slow or arrogant at times, and the passengers are well-heeled, savvy travelers.

Whether or not the passengers are mostly French depends on the itinerary. Ponant has been targeting a more international market with considerable success and also does a booming charter market. Announcements on the ship are made in both French and English, and the menu is designed to accommodate all tastes.

Le Boreal's interiors are like those of a minimalist boutique hotel. Everything is taupe, cream and white, with an emphasis on luxurious textures, from leather-fronted white drawers in the cabin to taupe silk cushions on the bed. Black-and-white Philip Plisson photo art lines the corridors. A cascade of glittering Swarovski crystals glistens in the small atrium.

What distinguishes the ship from other upscale vessels is its adventurous itineraries. Le Boreal is ice-strengthened, so it can sail to Antarctica and the Arctic, destinations that are mixed up with off-the-beaten-track European itineraries, as well as the South Pacific and South America. The ship carries a fleet of Zodiac landing crafts for getting ashore and for sightseeing in remote locations. There's a strong emphasis on coastal cruising, with long days in port, overnights and late departures, so you feel you're part of a destination, rather than just calling for a day.

Clientele varies dramatically according to the season, with younger families traveling during European school holidays and older couples attracted to the longer cruises to more remote locations. A typical cruise might draw about 55 percent of the passengers from France, with the rest hailing from the U.S., U.K., Australia, Germany and countries as far afield as Japan and Brazil.

Language onboard is not an issue. The maitre d' will seat you at an English-speaking table at dinner, if you ask, and all the mainly Indonesian crew speak English (often better than they speak French). There will always be English-speaking excursions when there are international passengers onboard, and announcements are made in English, as well as in French.

Several passengers were traveling in extended family groups, and kids ranged from 7 or 8 years old to teenagers. All the children were well behaved, and the teens certainly livened up the dance floor at night. The ship has a small dedicated area for children, which has video games, books and board games, but there's no special programming for the younger set. Children are a rarity on the ship's expedition cruises to Antarctica and the Arctic.

A word about smoking: All the inside areas of the ship and cabin balconies are nonsmoking. But on my cruise, there were a lot of smokers, and the outdoor bar and the outdoor lounge area behind the Main Lounge were often places smokers, including officers, would congregate. Naturally, this will vary from cruise to cruise, but for anybody who objects strongly to smoking, it might be worth bearing in mind.

Daytime: Casual in the main areas; people dress for sightseeing. Warmer clothes are necessary for expedition sailings. The line gives passengers their own parka for polar cruises.

Nighttime: Passengers were seriously chic, and women will want to pack dresses, nice pants and blouses for the nonexpedition sailings.

Formal night: Women are advised to pack a cocktail dress and some heels for the dressier nights, which brought out the Louis Vuitton and Missoni. Men do wear summer blazers or jackets on formal nights.

Get Le Boreal price drops
250,000+ people have entered their email

Where does Ponant Le Boreal sail from?

Where does Ponant Le Boreal sail to?

How much does it cost to go on Ponant Le Boreal?

On March 6, 2022 we boarded the Le Boreal, from Ponant in Ushuaia. We had wanted to go the Antartica, but decided to change to the Chilean Fjords itinerary, which we didn't regret!Read More
Cruising with style

I can recommend this cruise but for English speakers an appropriate charter may be easier.Unlike some of the other reviews we found the staff to be very friendly, the Filipino staff spoke better English than French, the Captain was very personable and obviously enjoyed mingling with the passengers.Read More
Train lover

Highly recommend for anyone and everyone, even the very unfit.

Le Boreal is an elegant and well maintained ship with wonderful staff. It was very annoying not to get our travel documents until 2 weeks before departure.Read More
CJSANDFS

Our tour guide met us in the lobby and off we went to Edinburgh Castle.So much for 'customer service' at the Real Mary's Close.Read More
Lainerz