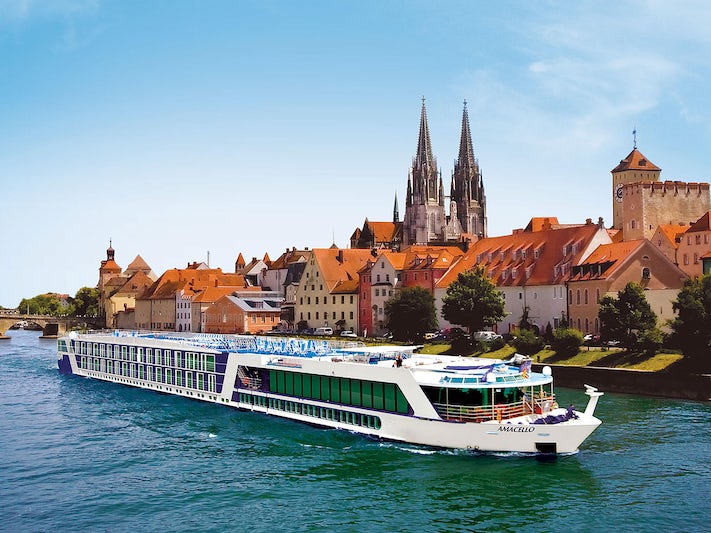 Gliding slowly through the Amsterdam-Rhine canal -- we were, of course, obeying the canal's stodgy speed limit -- passengers idled on AmaCello's sun deck, one man sketching the passing half-timber homes and church spires, others discussing the cargo ships/mobile river homes that transport raw materials down Europe's industrial superhighways. A short time later, we pulled into our first lock. The dungeon door closed behind us, and as the water level began to rise, we felt ourselves becoming ever more buoyant.

It's easy to see how people fall for the river.

AmaCello, which debuted in spring 2008, is one of river cruising's most modern vessels, on par with the newest offerings from competitors like Tauck and Uniworld. There's the elevator, the fire-orange abstract art piece that greets you in the lobby, the in-cabin multi-function Web/TV system, one of the best cabin shower setups on the rivers (more on that below), the wireless audio systems used during guided tours, Wi-Fi in the lounges and a hydraulic bridge that can be lowered with the push of a button to squeeze under low-slung bridges. Clearly, as river cruising has gained popularity, the niche has moved beyond its more traditional roots: reading on the sun deck; long, multi-course dinners with just-met passengers; evening social nights in the lounge with the piano man playing tasteful background ditties. Of course those draws are still the crux of the experience, but AmaCello presents a hybrid -- a marriage between river cruise tradition and innovation.

If Captain Vlad is manning the wheelhouse, he'll let you in for a primer about life on the river. Or, you can follow his every move from the navigation channel on your in-cabin flat-screen monitor.

A cruise on AmaCello is nearly all-inclusive. Beyond the cruise-ship standards -- food, accommodations, entertainment -- there's wine and beer with dinner, unlimited Internet use and guided tours in each port. There are also about 20 bikes available for tooling around onshore if you begin to wince at the thought of another two-hour panoramic city tour. (The free excursions are mostly of that variety.)

But, while the inclusions were certainly appreciated and the scenery serene -- the Rhine Gorge is Brothers Grim source material, castles and ruins literally blanketing the landscape -- there were a few quirks that detracted from the harmony. We were left slightly crimson after the bar manager rudely dismissed our polite claim that our wine was well past its prime. (Was that a piece of cork?) "It's just very heavy and very dry," he said, irritated. And, though the food was ambitious -- a mishmash of colors and ingredients intended to approximate fine dining rather than serving as the real thing -- the indulgent buttery soups and rich, salty entrees had us craving lighter options. The problem is, on a ship of this size, there are no other options onboard.

Despite our gripes, it's clear that AmaCello provides an excellent, comfortable way to sample the Continental interior. And, unlike on a coach tour vacation -- the closest approximation to a European river cruise -- on AmaCello, you check in once, and it's a stress-free seven days of castles and strudels, medieval market squares and World War II history.

AmaWaterways' passengers tend to be 55 or older, experienced, well-educated travelers who've sailed on both big-ship lines like Celebrity or Holland America and smaller-ship luxury lines like Windstar and Seabourn. The largest contingent comes from North America, but other English-speaking countries like England and Australia were well-represented. Quite a few have cruised the big ships and are looking for a change.

Dress onboard is casual and practical. For dinner, it's collared shirts for men and blouses and pantsuits for women. There was also a smattering of jackets from the slightly more formal-minded. Folks do dress up a bit for the "Captain's Farewell Dinner," when you'll see dresses, jackets, suits and a bow tie or two. No shorts, swimsuits or open-toed shoes are allowed in the dining room.

Get AmaCello price drops
250,000+ people have entered their email

Where does AmaWaterways AmaCello sail from?

Where does AmaWaterways AmaCello sail to?

How much does it cost to go on AmaWaterways AmaCello?

then to Vienna's Christmas opened and Salzburg open and starting to open in Prague You would think that would be enough, but I figured since we were this far, just one more city Paris.The Christmas Markets were just going up and we could not buy gift, but we could sample mulled wine and sausages.Read More
ironhead48

The cleaning service was great and was always on top of providing a clean and comfortable room.I highly recommend a massage it was fantastic and a great value.Read More
Tinebird

STAFF: The AmaCello staff were wonderful, friendly, delightful, and helpful in every way.Read More
Jimbola

The AmaCello was an older ship.Read More
grandmaR