Not as spacious and or well-equipped as Princess' newer vessels

Editor's Note: Dawn Princess left the Princess fleet in April 2017 and transferred to P&O Cruises Australia, where it sails as Pacific Explorer.

Refurbished in 2015, the 77,000-tonne 1,970-passenger Dawn Princess is the second ship in Princess Cruises' Sun class (which also includes Sea Princess and Sun Princess). The ship offers Australia, New Zealand, South Pacific, Hawaii and world cruises -- and is run like an Australian cruise ship. That means onboard prices are in Australian dollars, Vegemite is on offer at breakfast, and most beers and wine are local brands. Unlike Princess' other ships, Dawn Princess does not offer a flexible dining option in the main dining room (passengers can dine at early or late seatings, or simply choose a different venue), and features Australian entertainers, TV, movies and sports games onboard.

Now considered a mid-sized ship (at least these days -- when it launched it was considered large), Dawn Princess offers a cruise experience that hews to both Princess traditions and contemporary travel styles. The ship has the requisite multi-million dollar art collection, a nice health and fitness facility, two main showrooms, an around-the-clock restaurant, a few alternative eateries, and 410 cabins with verandahs (a low ratio today but fairly revolutionary in design when the ship was launched). A 2009 refurbishment added Princess's signature adults-only Sanctuary sun deck and the giant Movies Under the Stars LED screen, as well as upgraded carpeting, upholstery and hull paint.

The multi-million refurbishment in Singapore in May 2015 added lots of ‘first at sea' features. Princess Cruises chose Dawn Princess as the first ship to get the line's dedicated whisky bar, which brings together 63 different whiskies from around the world. It was also the first Princess ship to offer a beer and wine garden festival, held twice during every cruise of more than seven days on the top deck, with live music and marquees selling regional drinks. Other changes include a New Zealand Natural Ice Cream parlour, a revamped Lotus Spa, and an Italian café called Amuleto inside the buffet, now known as the World Fresh Marketplace.

Dawn Princess is far more intimate than its 21st-century siblings, but that also means that facilities are neither as expansive nor as well equipped as those on the fleet's newer vessels. The size is especially felt in the Horizon Court buffet venue (where options aren't as varied as in other lido buffets), the cramped workout room and the underwhelming teen lounge. On the other hand, having two show lounges is a great way to give passengers more entertainment choices each night, and Princess really utilises the space it does have with a wide variety of onboard activities, everything from ceramics to dance classes, game tournaments to computer workshops.

Dawn Princess attracts the experienced cruiser who has done shorter cruises on other lines and is now venturing out into longer sailings on an upgraded class of ship.

Free Price Drop Alerts
Get Dawn Princess price drops
250,000+ people have entered their email
By proceeding, you agree to Cruise Critic’s Privacy Policy and Terms of Use.
THANK YOU FOR SIGNING UP!

Dawn Princess passengers are mostly Australians, with a smattering of New Zealanders. The ship's long itineraries attract a high number of seniors, especially in the off season and on the annual world cruise. However, during more attractive cruising periods, the ship does get a wide variety of passengers, including families and teachers on holiday.

Dawn Princess guests tend to be experienced travellers and cruisers, and many have done shorter cruises on other cruise lines (including sister company P&O Australia).

Daytime dress is casual. Evening dress codes are either smart casual or formal. Princess defines smart casual as "what would be worn to a nice restaurant at home." Inappropriate clothing items include beach wear, shorts, baseball caps or casual jeans (frayed or with holes). Formal attire includes evening gowns, cocktail dresses or elegant pant suits for woman, and tuxedoes, dark suits or jacket and slacks for men. There are typically one to two formal nights per week.

There is no compulsory tipping on Dawn Princess. No gratuities are added to passenger accounts. 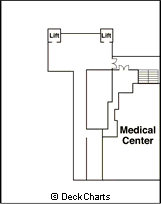 Find a Dawn Princess Cruise from

Compare and book shore excursions for your next cruise
Dawn Princess Ratings
Want to cruise smarter?
Get expert advice, insider tips and more.
By proceeding, you agree to Cruise Critic’s Privacy Policy and Terms of Use.