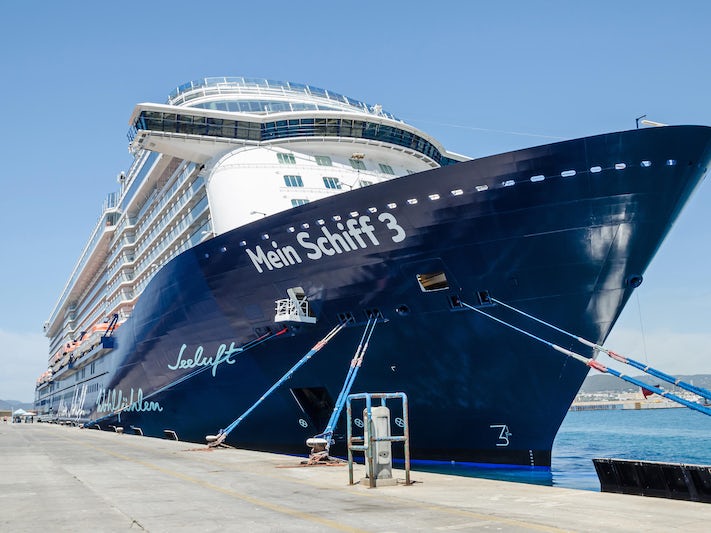 The story behind the unusual name? TUI Cruises held a contest to determine the ship's moniker, and more than 11,000 people sent in over 30,000 suggestions. The winner was Mein Schiff, which translates to "my ship."

Mein Schiff will be familiar to some cruisers -- it was transferred to TUI from sister company Celebrity Cruises, for which it sailed as Celebrity Galaxy beginning in 1996 (Interestingly, Galaxy was actually built in Germany at Meyer Werft).

Following the handover from Celebrity to Tui in March 2009, work began on a 50 million euro conversion, which included the addition of more than 200 balcony cabins (As Celebrity Galaxy, there were just 220 balcony cabins). The ship also now boasts spa cabins and family suites.

Mein Schiff's livery is one of the most unique in cruising, with huge calligraphy-style writing along the side of the hull designed to evoke "emotional associations with maritime holidays," according to TUI Cruises.

Mein Schiff features 13 lounges and bars, as well as a refurbished sushi restaurant and a steakhouse. Passengers can relax as there is no need to book for dinner -- all dining is open seating. Wine and beer with dinner are included in the fare.

One very European touch is that every cabin features an espresso machine to help provide that kick-start to the day.

Other highlights of the ship include a 1,700-square-metre spa area boasting recliners for relaxation; private spa suites; and a 2,200-square-meter pool deck with private cabanas.