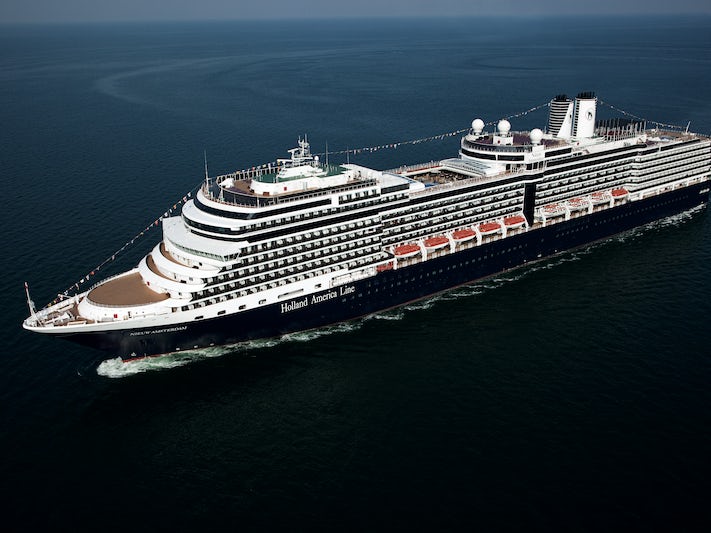 Nieuw Amsterdam is a ship whose name is associated with a rich and celebrated history for Holland America Line, and being on the ship gives you a sense of the classic age of cruising, back when Hollywood starlets graced the pool deck and dressing up for dinner was a time-honored ritual.

A great choice for a pampered, laid-back vacation -- particularly for music lovers

In December 2017, the ship underwent upgrades throughout, and several public spaces feel refreshed and contemporary. People who have previously traveled on Nieuw Amsterdam might breathe a sigh of relief to know that the ship has now banned smoking everywhere, except the outside Sea View Bar at the ship's aft. Carpeting has been replaced throughout the ship's public areas, and even the casino smells fresh and clean.

The ship lacks the flashiness or overwhelming size of some mega-cruise ships, but its unique entertainment options make up for any missing bells and whistles. For example, Nieuw Amsterdam's Music Walk creates a three-punch hit list of rich musical venues all within a short walk of each other on Deck 2. From the symphonic orchestral beauty of the Lincoln Center Stage to the soulful, dance-floor-burning hits of B.B. King's Blues Club to the sing-along atmosphere of Billboard Onboard, you're guaranteed to find something your ears will enjoy.

You might notice the small details, such as the cool towels provided at the dock before you return to the ship from a day at port, the wrapped silverware in the buffet restaurant and the way crew members and even passengers in the hallway are more likely to say, "Good afternoon" or "Good evening," rather than a more informal "Hi!" The whole effect is dignified and unrushed.

Another feature that we greatly appreciated was Holland America's Navigator, an internet-based application that allows passengers to see daily scheduled events at a glance, book dinner reservations and shore excursions, and chat with any family and friends who are traveling with you -- all without paying for internet access.

Be the first to know when Nieuw Amsterdam prices drop so you can book with confidence.

Holland America's clientele skews more toward older adults, and this ship fits that profile, with retirees accounting for a large number of the population. Though there weren't many younger cruisers or families during our trip, a friendly atmosphere and ample opportunities for getting to know fellow passengers over meals or on shore excursions led us to meet many interesting people along the way.

The biggest downsides of the ship were related to the number of people onboard compared to the size of the public spaces. For example, it was often very difficult to find pool chairs at either the main or the aft pools and waiting in line for meals or popular events was very much the norm. If peace and quiet is what you're seeking, the key is to find spaces of solitude wherever you can.

Nieuw Amsterdam attracts a large percentage of Americans from the Upper Midwest, East Coast and Canada. The majority of the passengers are couples and retirees, and daily activities and entertainment options seem to be designed for an older clientele. You'll find few families with young children onboard, but those who are cruising tend to receive special attention and enjoy a low child-to-crew member ratio in the onboard programs and activities.

Daytime: Casual clothing is the norm during the day.

Evening: On a seven-day itinerary, you can expect two formal evenings (called Gala Nights), while the rest of the nights are designated "smart casual" in the Dining Room and specialty restaurants. On Gala Nights the majority of women wear dresses (similar to what you might find at a daytime wedding), while men wear button-down shirts -- occasionally paired with jackets on formal nights. A small percentage of people dressed to the nines, with one group on our sailing even donning tails and top hats.

Not permitted: Swimsuits and other pool wear, men's tank tops, shorts and distressed jeans are not allowed in any of the restaurants during the evening hours.

Find a Nieuw Amsterdam Cruise from $349

Where does Holland America Nieuw Amsterdam sail from?

Where does Holland America Nieuw Amsterdam sail to?

How much does it cost to go on Holland America Nieuw Amsterdam?

Cruises on Holland America Nieuw Amsterdam start from $349 per person.

Is Holland America Nieuw Amsterdam a good ship to cruise on?

Great Welcome Back to Cruising

What a relief to find the Nieuw Amsterdam in sparkling clean condition and a happy and enthusiastic crew onboard.... Read More
AncientWanderer

My spouse and I were passengers on the July 24 sailing of the Nieuw Amsterdam from Seattle to Alaska.... Read More
MostlyLegal

I do think that Nieuw Amsterdam is the perfect age and era of HAL ship - there are still bathtubs in outsides and balconies and there is still that lovely deck and the service is excellent while the ship... Read More
When and How