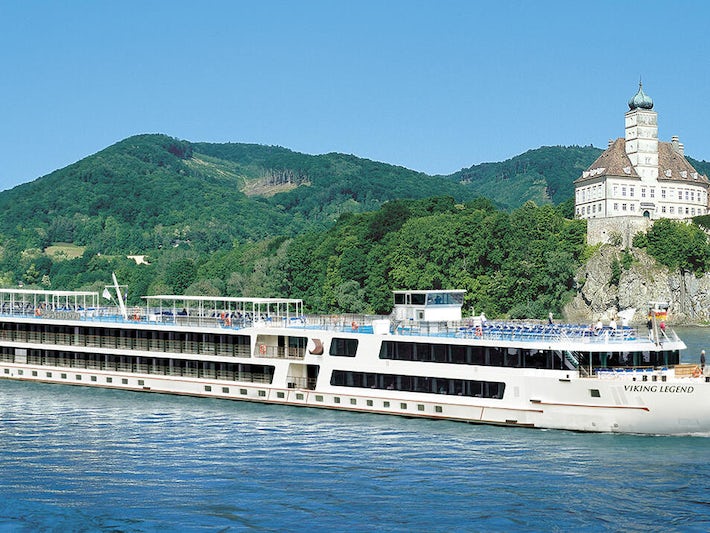 River ships are the original slow boats, flat-bottomed vessels that slowly ply inland waterways, designed to fit under bridges and through series of locks. While they bring passengers past beautiful scenes of river life, including fishing shacks, vineyards and castles, and cruise right into fascinating Old World cities such as Budapest and Vienna (you and walk off the ship right into the city center in some cases), they are comfortable but hardly the kind of ships that draw big buzz. Except that this pretty, contemporary ship, part of the world's largest river ship fleet, and introduced in spring 2009, does have some quiet firsts.

For those who seek luxury, the Viking Legend boasts the two largest suites on any European river ship, though at 310 square feet each they are hardly penthouses. All cabins on the ship have windows for views, but cabins on two decks on Legend are equipped with French balconies – you can open floor-to-ceiling glass doors to let in breezes (there is a railing through no step-out area). Most beds on the ship are comfortably hotel-like and in-cabin entertainment comes via flatscreen Sony TVs. The ship also has Wi-Fi (free if you bring your own laptop). And at 443 feet, the Legend is one of the longest ships in the Viking fleet.

But the biggest achievement is actually behind the scenes, where a state-of-the-art propulsion system delivers a quieter, vibration-free, more environmentally friendly ride. Legend passengers probably won't notice what's going on below the waterline, but the hybrid, diesel/electric engines save an estimated 20 percent on fuel. This river ship is greener than its competitors.

Viking Legend serves up a particularly comfortable, friendly environment (a limited number of public rooms on only four passenger decks assures you pretty much get to know everyone), a crew that certainly tries hard to please and, as with all river ships, the advantage of visiting a different locale each day while only having to unpack once. Plus on the calm river-ways, there is no need to worry about seasickness – except for the change in scenery you'll hardly know you are moving. This ship was purpose-built for cruising riverways in Europe including the Danube, Main and Rhine, where there are some very low bridges. So the Legend also features a collapsible Wheelhouse and collapsible canvas awnings on the sundeck – when needed, up on top, the Legend can get as flat as a pancake.

Those on Viking Legend are mostly 60 and up (some into their late 80s and 90s), though on our cruise we also had one 30-something honeymoon couple attracted by the two-week itinerary, and several couples in their 50s. They are generally well-traveler and interested in world history. They are a fairly active group, though these cruises are hardly soft adventure (an ability to walk on cobblestones and uphill is helpful). Most like to chat, and the convivial small ship environment enhances this aspect.

Nearly all passengers are American (though you may find a few British, Canadians and Australians too). A lot of guests have roots in the region and are here to see where a parent or grandparent was born.

The dress code during the day is casual and comfortable – you'll want sneakers or comfortable walking shoes for the tours. At night, some get gussied up slightly for dinner – country club casual – while others don't bother to change at all. An exception is the Captain's Dinner, once each cruise, dressy but not formal – women may want to wear a dress or other dinner party attire, men a collared shirt with blazer (though no tie or jacket is required).

In summary the Viking Legend is the Travelodge of the Viking fleet .Read More
Jaynea

We are definitely considering another river cruise and it would definitely be a Viking one.Read More
Bill and Liz Burton

The crew and workers aboard the Legend were all dedicated to providing their guests with optimum experiences.Read More
DrDinoP