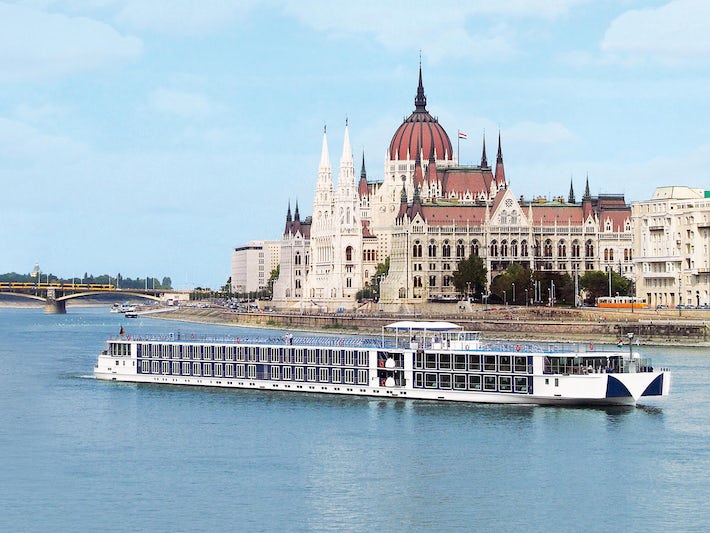 Note: River Beatrice is being transformed into the line's next "super ship" in 2018. It will be renamed S.S. Beatrice.

When I took my first Europe river cruise on a perfectly pleasant if unexceptional vessel a dozen years ago, it was clear that this travel experience was more about the dramatic terrain that surrounds the river than the boat that cruises on it. That ships traversing European waterways have long been bland, though comfortable, is due in large part to restrictions in width and length (they must pass through narrow canals and under ancient bridges). There simply isn't room for sprawling spas, lap-length swimming pools and soaring atriums.

Indeed, on most every riverboat, public rooms are limited to a main restaurant, small fitness center, a library, and a vast roof-top sun deck that's dressed with tables, chairs, chaise lounges and perhaps a human-sized chessboard. Stateroom furnishings are comfortable, if basic, and all but the very newest riverboats feature cabins with immutable twin-sized beds that are made into ad-hoc sofas during the day, and private bathrooms that are typically somewhat claustrophobic.

Despite my generally low expectations of riverboats, I had higher-than-usual hopes prior to my cruise on Uniworld's new River Beatrice -- and not just because the company had been trumpeting this as a genuine luxury riverboat. In 2003, Uniworld was purchased by a company that owns, among other travel operations, tour operators like Contiki and Trafalgar and, to my mind, the equally important Red Carnation group of hotels. This handful of luxury properties includes London's Chesterfield Mayfair, Dorset's Summer Lodge, Geneva's Hotel D'Angleterre and West Palm Beach's Chesterfield, all of which I've loved. These hotels excel in large part because rooms are plush and theatrically decorated, service is superb, and food served at in-house restaurants is sophisticated without being pretentious. A company with a track record of creating wonderfully upscale vacation offerings should be able to translate the same experience into a river cruise, thereby taking the riverboat experience up a notch.

River Beatrice delivered on Uniworld's promise. Staffers and crew were marvelously attentive. The ship itself is one of the most beautiful I've ever seen with hallways lined in silk and a collection of original artwork that was so compelling I found myself going out of my way each day to visit various favorite pieces. Eighty percent of cabins have French balconies, and the 15 suites are impressive for the riverboat industry where spacious accommodations are an anomaly.

Meals, which beautifully incorporated tastes and foodstuffs from the places we visited along the Danube, were consistently delicious. The boat's lone shore tour staffer deftly balanced standard, intro-to excursions with a smattering of more adventurous -- and more locally oriented -- outings.

It's clear that European riverboats are now, even with spatial limitations, beginning to catch up on trends that have been changing ocean-going ships for the past decade. As we passed by numerous riverboats operated by other cruise lines -- or tied up with them, literally side by side, at various docks -- it was clear to me that the newer ships all were more beautiful, offered more flexible onboard options, and featured more of the key amenities, from high-tech toys to French balconies, than ever before. I'd happily cruise on any of them. But there wasn't a ship I saw out there this summer that compared with River Beatrice.

Passengers on our high-season summer cruise were largely North American, British or South African and in the 50-plus and beyond age range. Most were well-traveled and many had never cruised but were regulars on the tour circuit.

Dress code is country club casual. During the day, that meant casual slacks and skirts; shorts were fine for sunning on the top deck. At night, men wore polos and jackets; for women summery dresses, skirts and pants outfits were appropriate. The only night that passengers really did dress up was for the Captain's Gala on our last night and so men donned ties.

Once you go river cruising you never want to be on one of those floating cities in the ocean again. Awesome vacation thanks to Uniworld and the crew of River Beatrice.... Read More
thekegler

Our first river cruise, "Delightful Danube", selected to accommodate an itinerary including other nearby sites and tours.... Read More
tjohnst5

We definitely plan to do another river cruise.... Read More
despenn

This was our first river cruise. Except Viking, we were not familiar with any other river cruise companies, however, we did some research and selected Uniworld.... Read More
pacha701