Allure of the Seas Cabins 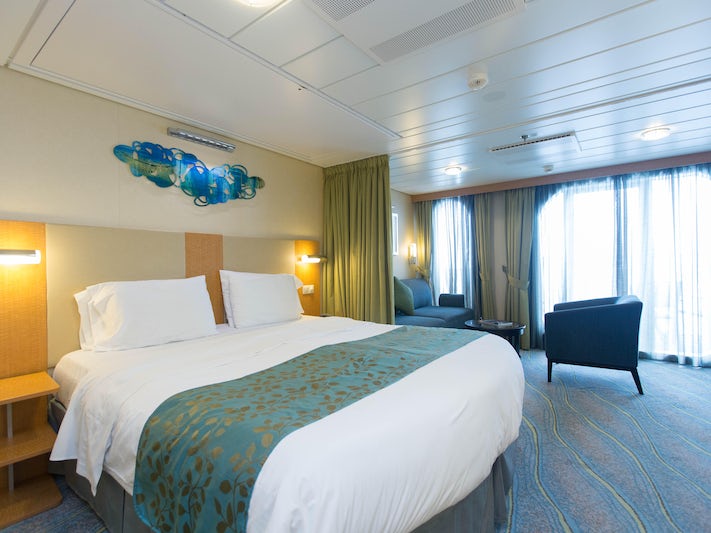 Royal Caribbean Allure of the Seas rooms are divided into more than 20 cabin categories, including "inward-facing" balconies, accommodations with a view of the sky and either Central Park's greenery or the Boardwalk's machinery (carousel, AquaTheater). There are also all manner of upscale abodes, including two-story Loft Suites and AquaTheater Suites, show-stopping rooms that feature mammoth wraparound balconies overlooking the ship's outdoor amphitheater.

For disabled passengers, there are three accessible suites (including one Loft Suite with an elevator), 32 balconies, two oceanviews and eight insides.

The 2015 refit saw the addition of 46 rooms -- some created by slicing up larger rooms. For example, the vast Presidential Suite, which was on Deck 12, has been converted into two Family Suites.

Despite the variety of categories, most of Allure's accommodations are distinguished solely by location. In other words, the innards of more than 2,000 of the ship's 2,700-odd cabins look remarkably alike.

All standard cabins have two twin beds that convert to queens, small sitting areas and interactive flat-screen TVs, on which passengers can book shore tours, order room service, make dining and entertainment reservations, and check onboard bills. A handful of national U.S. networks like CNN and Fox News are featured, and for the kids, there's the Cartoon Network.

Every cabin also has an iPod dock with speaker, but these are largely redundant due to the ever-changing size of iPhone sockets; they're incompatible with an iPhone 5 or above. There are also not enough electrical outlets (three U.S., one U.K.), and all are confined to an area underneath the vanity.

Plenty of shelves, cabinets, cubbies and bins will keep at least two passengers happy. Carry-ons fit comfortably under the bed, but anything larger might prove a tight squeeze. You have approximately a foot between floor and bed frame.

Bathrooms feature showers enclosed in clear glass with shampoo dispensers and foot rests for leg-shaving. Hair dryers, located under the desks in the main cabin areas, are somewhat chintzy, so you might want to BYO.

Allure of the Seas Cabins to Avoid

While cabin setup is standardized, location is vital. For some, there are Allure of the Seas rooms to avoid. Cabin reviews are a would-be Allurean's best friend. For instance, passengers looking to read quietly on a Central Park balcony during a sunny sea day may find themselves being assaulted from above by the pool band.

Additionally, the majority of Allure's inside cabins are 172 square feet, but there are also 53 category Q cabins with just 149 square feet of space. There are Promenade-facing interiors with large bay windows overlooking the indoor thoroughfare; these rooms are 193 square feet.

Allure of the Seas Balcony Rooms

Standard balcony cabins are available in every category -- Central Park, Boardwalk, traditional verandas with ocean views -- and typically 182 square feet with 50- or 52-square-foot verandahs. Bulges, port and starboard, along the ship's superstructure create a number of standard accommodations with more generously endowed balconies (80 to 82 square feet). Regardless of size, each outdoor space is furnished with a table and pair of chairs made of metal and mesh.

Allure of the Seas Suites Come with Balconies and Perks

There are seven suite categories (not including Junior Suites), all of which have access to the new Suite Lounge and Coastal Kitchen. In addition to a concierge, suite passengers receive a perks like a nightly cocktail "hour" with free drinks from 5 to 8:30 p.m.; priority check-in; reserved prime seating in the main theater; access to full breakfast, lunch and dinner menus for in-cabin dining; luxury bathrobes and complimentary pressing for formal nights; access to a private sun deck with loungers and cabanas; an exclusive reception with senior officers; and free dining in the Suites-only Coastal Kitchen.

The smallest suites are the 30 Allure of the Seas Grand Suites at 371 square feet with 105-square-foot balconies. They feature marble entries, large bathrooms with tubs and two sinks, and a living area with tables and sofas.

The two-bedroom AquaTheater Suites are large, with two separate rooms, a vanity with a chair in each bedroom, living area with double convertible sofa, dining room, marble entranceway, entertainment center and two bathrooms, one with a tub. But what really stands out are the location and dimensions of the enormous balconies, which are almost as large as the cabins themselves. The balconies give new meaning to the word "wraparound," allowing 180-degree vistas of the Boardwalk, the AquaTheater, rock climbing wall and open ocean, with space for stools, tables, chairs and loungers. Note the balconies also decrease in size by deck, starting at a vast 803 square feet on Deck 8, then shrinking to 716 square feet on Deck 9 and 648 square feet on Deck 10.

These six suites have proven to be so popular (despite the exposed setting -- rock climbers literally pass by your cabin) that Royal Caribbean decided to add six new ones in the 2015 refurb. It's worth noting that the six new ones (on decks 11, 12 and 14) are classified as aft-facing Grand Suites. Presumably, this is because they are significantly smaller than the true AquaTheater Suites on decks 8, 9 and 10 and do not have two bedrooms.

The four new suites aren't small though, ranging in interior size from 421 square feet (Deck 14) to 466 square feet (Deck 11). The suites each feature two rooms: a bedroom (with a large king-size bed, lots of wardrobe space and a bathroom with a tub) and a living room (with a large sofa that converts to a bed, a coffee table and double sliding doors that lead to the balcony). Deck 11 balconies are 470 square feet, and Deck 12 balconies 362 square feet. They're slim, but they wrap around. However, the two suites on Deck 14 have 136-square-foot balconies that do not wrap around.

(Anyone very familiar with this ship may have worked out that the addition of six new suites at the back of the ship means the loss of six "secret" balconies. Accessed only by unmarked doors, these gave passengers a birds-eye view to the AquaTheater for free. They are now gone.)

Loft Suites on Allure of the Seas

The Loft Suites are two-deck accommodations that have been lauded for their layout and criticized for their garish, multicolored design. The Crown Loft Suites measure 545 square feet with 114-square-foot balconies and feature living spaces downstairs with pullout sofas and bathrooms, and master bedrooms and bathrooms upstairs, each with a shower large enough for two (his-and-hers shower heads), fog-free mirrors and limestone mosaic tile accents. The Sky Loft Suites add some extra space. They clock in at 722 square feet with 410-square-foot dine-on balconies and extra showers in the downstairs bathrooms.

Allure of the Seas Family Rooms

Allure also has several categories of family-friendly cabins, including insides (260 square feet), oceanviews (271 square feet) and balconies (271 square feet with 82-square-foot balconies). Each offers sleeping for up to six via two Pullman beds, a convertible sofa bed and two twins that can be turned into a queen. A number of these rooms also feature bunk beds, tucked away in what can't really be classified as a room. It's more of a space that's divided from the main room by a curtain and just has room for the bed. It's a neat arrangement -- ideal for smaller kids -- and adds a degree of privacy for adults. There are 260 family insides but only eight outsides and seven balconies, so book well ahead if you're looking to rope a family balcony.

Find an Allure of the Seas Cruise from $299