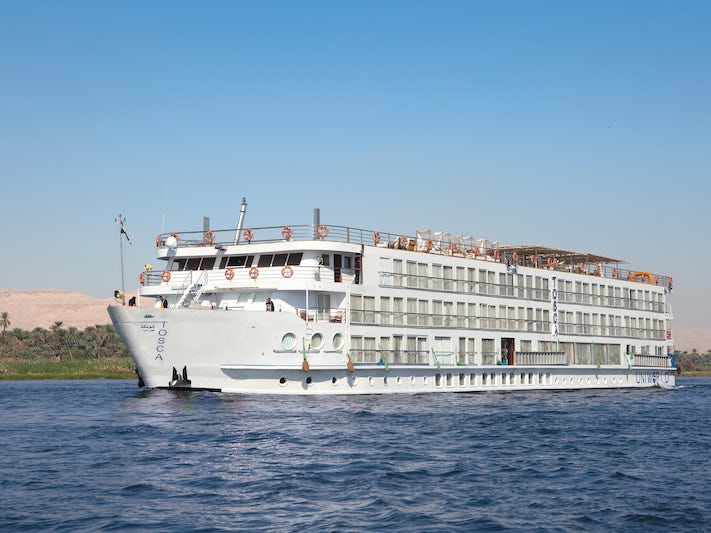 Editors Note: In 2020, Uniworld will replace River Tosca in Egypt with a new vessel, S.S. Sphinx.

Food, while tasty, not as good as that on line's European ships

A luxurious way to see the Nile's highlights, on a singularly gorgeous ship

A Nile River cruise has long served as a bucket-list fantasy; even Cleopatra enjoyed her time lolling in splendor as her barge passed her kingdom's already ancient wonders. And, now that Uniworld has brought its brand of luxury cruising to the already-crowded Nile riverboat field, you too can feel like a pasha as experienced tour guides show you the best of Egypt.

Walking into River Tosca, you immediately sense that she's a step up from the other 399 ships licensed to ply the Nile. Beyond the marble floors and chandeliers, there's a rich attention to detail that's carried through all of the public rooms. Shishas (water pipes), lanterns and colonial-era prints add an exotic flair to Uniworld's usual tasteful, upscale decor.

Outside the ship, Egypt can assault your senses; unlike most river cruising destinations, the country is poor, and vendors can be aggressive, which is why the River Tosca offers a welcome respite from the chaos. The mostly Egyptian staff is eager to please, and your Egyptologist guide is always on hand to explain the intricacies of the country, both ancient and modern.

With a packed itinerary, however, you won't be spending too much time onboard. Each of Uniworld's Egypt offerings is heavy on sightseeing trips that are included in your package, and the staff get you up early to avoid the midday heat. You could stay in your room and miss a temple (or two), but you may kick yourself later.

Plus, the hot afternoons are a perfect time to unwind, either in the small pool or with a cup of mint tea under the covered portion of the top deck. Most of River Tosca's affluent clientele have put in as many miles on their body as stamps in their passports; many preferred to nap or get massages in the ship's compact spa. Outbreaks of "mummy tummy" were not uncommon; taking the time to rest, along with some pills from the front desk, restored most passengers within a day or two.

And having that type of service available while navigating Egypt is what sets River Tosca apart from the competition. As the country's revolution continues, travel in Egypt comes with a certain amount of unpredictability -- so it's nice to know that your River Tosca experience will remain smooth sailing.

As per most Uniworld cruises, River Tosca cruisers are affluent and well-traveled, with most in the 55+ category. Going to Egypt right now requires a certain comfort with the world, and most passengers had the sophistication to handle the minor travel disruptions that take place in a country still dealing with revolution.

Uniworld is an American company, so the line's passengers are usually North American. But on a recent sailing, an equal number of Australians and New Zealanders were onboard -- a new phenomenon, according to a ship guide.

While River Tosca flies the Uniworld flag, the ship also books passengers through Insight Tours, which is owned by the same parent company. People who sign up through Uniworld take shore excursions and the land portion of the trip with their own guides, however.

Egypt is a Muslim country, and while swimsuits, tank tops and shorts are fine for the ship's top deck, women will want to cover up when touring, especially in Cairo. Bring a scarf that you can drape over your arms when entering religious sites and avoid skirts above the knee. Dinners are country-club casual, with most women wearing dresses or pants paired with nice tops. Women won't need heels. Men wore collared shirts and slacks. Everyone should bring comfortable shoes for touring.

At least once during your cruise, River Tosca hosts an Egyptian night, where those onboard are encouraged to wear galabeyas, beaded tunics or headdresses. You can buy these outfits in the ship's store or from street vendors, or bring one from home.

Where does Uniworld River Tosca sail from?

Where does Uniworld River Tosca sail to?

How much does it cost to go on Uniworld River Tosca?

The Tosca was a very nice ship, and the service was outstanding. There were only 62 on the cruise and we were divided into 3 bus groups.Read More
KevScratch

My first and last Uniworld cruise

After unexpected fire damage on the Sphinx in December, we were told that our January cruise would be on the old and worn, Tosca.Read More
J12345678

This was a family trip and we loved the River Tosca and its aging gentility. The crew/staff were most accommodating and friendly, with attention to one’s every need.Read More
BarbaraMafuta

RIVER TOSCA SHIP I will admit to being pleasantly surprised by the ship especially after reading quite a few negative reviews of the ship.Read More
KarenLAdler