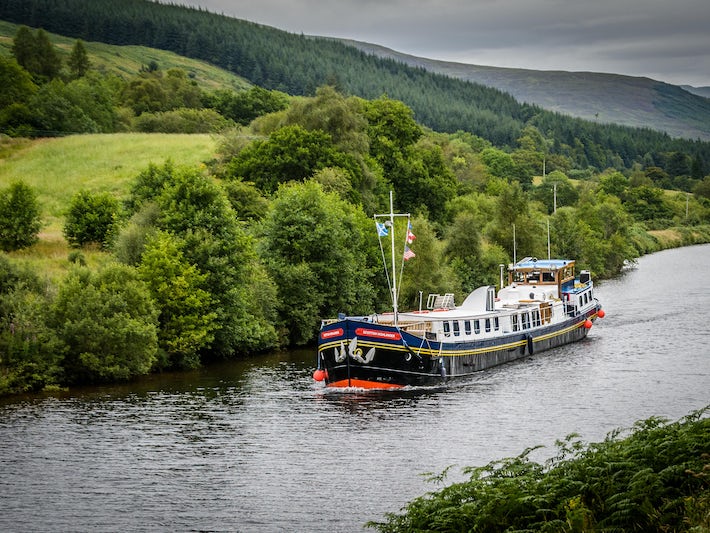 The staterooms on this vessel are relatively roomy compared to others, with one suite at just about 150 sq. feet and three staterooms at 115 sq. feet. All rooms can be doubles or twins and are designed with cheerful Scottish plaids, dark woods and antique reproductions. Each room has a wardrobe (the suite has two), a bedside table with reading lamp, four drawers and a cabinet. Each cabin has an en-suite bathroom with shower, toilet and sink. Amenities include soap, shampoo, shower gel, lotion, towels, hairdryers and bathrobes. Each room also has two windows with one that opens. All current is 220 to 240 volts (North American appliances need converters) with the exception of the bathrooms, which have a 110 outlet for shaving only. Rooms do not have air-conditioning (fans are available if needed), but they do offer central heat.

The saloon is graciously appointed with leather club chairs, sofas, occasional tables, a bar and several large windows. Walls are clad in clubby mahogany and yew, the floor is carpeted in a blue and green tartan plaid. The room contains a television and DVDs, a stereo and CDs, some board games and a small library. A walnut dining table serves eight. The unfurnished sundeck is used primarily for observation.

Meals are served in a single seating, with breakfast and lunch offered buffet-style. Breakfast is Continental, with breads, yogurt, cereal, fruit, coffee and tea, but a full Scottish breakfast can be prepared on request. Lunch is typically breads, cold-cuts, pates, fish, salads and cheeses served with wine. If the air is chilly, a hot three-course meal may be served, and if the weather is nice, a picnic on the moors may be planned. Dinner is an elegant candlelit affair, with regional cuisine (salmon, lamb, venison or game, such as partridge) paired with wine, desserts, cheeses, coffee and liqueurs. The dress code at all meals is resort casual, except for the Captain’s dinner on the last evening, which requires cocktail attire.

As on all of the hotel barges in European Waterways' fleet, Scottish Highlander is an all-inclusive product, with wines, soft drinks, bottled water, beer, liquor and liqueurs, as well as all onboard meals and snacks, included. (Certain vintages of wine and Champagne -- except for the Welcome Aboard greeting -- are not included, but can be provided for a fee.) Shore excursions, usually lasting from two to four hours, typically take place once a day; all entry fees are included with your cruise fare. Optional activities cost extra. An eight-passenger minibus meets the barge at specified locations to transport passengers on their excursions.

The barge carries six mountain bikes onboard for guest use. Scottish Highlander also has a Zodiac-type boat -- called a ship's fender -- with an outboard motor for excursions along streams and creeks and for fly-fishing opportunities. Onboard binoculars come in handy for bird-watching.

Obviously, golf excursions are popular in Scotland, but in order to play at a rated course, you have to have a handicap rate card and a letter of introduction from your hometown club manager.

Scottish Highlander's route takes you through the locks and canals around Loch Ness and onto the lake itself. Excursions include visits to castles, hikes through heather-laced moors, at least one Scotch whisky distillery and dinner ashore at the Caledonian Hotel.

Available for charter, Scottish Highlander is also available as a honeymoon escape from fall to spring. The entire barge is configured for two people with a cozy, romantic atmosphere. Other charters include family sailings, walking tours and -- of course -- golf cruises.

Scottish Highlander has four crew members: skipper (captain), chef, hostess and tour guide. Gratuities are discretionary and typically average between 4 and 7 percent of the fare paid, given to the Captain for distribution.