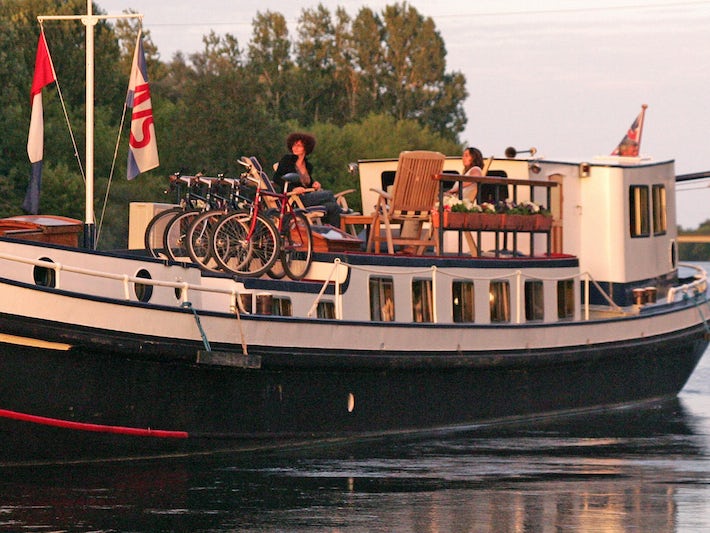 Originally built in 1921 as a Dutch freight barge transporting beer, Nymphea was converted to a hotel barge in 1985. At 81 feet long and 14 feet wide, it's among the smallest of Go Barging's vessels, and is equipped to carry six passengers. Its shallow draft makes it ideal to cruise the sandy River Cher in France's Loire Valley.

The three cabins are cozy -- the largest is just under 130 sq. feet, and the smallest is 84 sq. feet. Extensive use of polished hardwoods anchors the decor, both in the cabins and in the dining saloon. Each cabin's en-suite bathroom contains a toilet, shower, sink, towels, hand soap and hairdryer. Each cabin also has at least one small window that opens, a reading lamp, small closet and individually controlled air-conditioning. In one of the cabins, the twin beds can convert to a double; the other rooms are twin only. All current is 220 volts (North American appliances need converters) with the exception of the bathrooms, which have a 110 outlet for shaving only.

The cabins are located on the same level as the dining saloon (although the bow cabin is three small steps up). The saloon has built-in sofas, a coffee table, dining table for seven, mahogany paneling, brass fixtures and stained-glass windows. Guests can also make use of the fully stocked bar and fridge 24 hours a day, as well as the stereo system and CDs. A small sitting area called the "upstairs saloon" is located a few steps up from the dining area.

The sundeck has seating for all guests, with reclining lounge chairs and an umbrella. Snacks and wine are often served on this deck. In the saloon, meals are served in a single seating, with breakfast and lunch offered buffet-style. Breakfast consists of a Continental repast with breads, croissants, yogurt, cereal, fruit, coffee and tea. Lunch is typically breads, cold-cuts, salads and cheeses, with the occasional hot entree or soup. The meal is served with wine, and finished with dessert and coffee. Dinner is an elegant candlelit affair, with regional cuisine paired with wine, desserts, cheeses, coffee and liqueurs. The dress code at all meals is resort casual, except for the Captain's dinner on the last evening, which requires cocktail attire.

As on all of the hotel barges in European Waterways' fleet, Nymphea is an all-inclusive product, with wines, soft drinks, bottled water, beer, liquor and liqueurs, as well as all onboard meals and snacks, included. (Certain vintages of wine and Champagne are not included, but can be provided for a fee.) Shore excursions, usually lasting from two to four hours, typically take place once a day; all entry fees are included with your cruise fare. Optional activities, such as golf or hot-air balloon rides, cost extra. An air-conditioned mini-bus follows the barge's route and is available at designated times for transport.

Nymphea sails through the central Loire Valley, primarily on the River Cher. Guests are met at the TGV station at St. Pierre des Corps and returned to the same location after the voyage. The itinerary is from Azay sur Cher to Nitray or vice versa, and includes excursions to Clos Luce (home of Leonardo da Vinci), several chateaux and their wineries, and a silkworm nursery.

The barge carries six mountain bikes for guest use, and the itinerary is so leisurely that guests often take the bikes and meet up with the barge at its mooring point. Some games and a small library are also provided. Nymphea offers theme cruise charters, which include wine, walking, cycling or family cruises.

Nymphea has three crew members: a skipper (captain), chef and a hostess/stewardess, all of whom speak English and French. Gratuities are discretionary and typically average between 4 and 7 percent of the fare paid, given to the Captain for distribution.