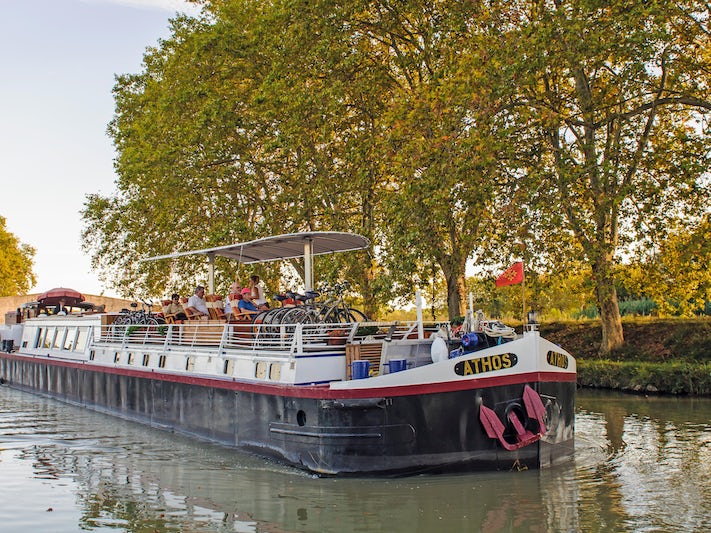 Athos was originally built in 1964 as a cargo barge to carry sand, grain and wine; it was converted to a hotel barge in 1982. At 101 feet long and 18 feet from side to side, it’s one of the widest barges in the Go Barging fleet. Athos accommodates up to 10 passengers in five double or twin staterooms. Its route is the Canal du Midi from Sallele d'Aude near Montpellier to Marseillan in the south of France.

The staterooms on Athos are quite tiny; at 77 sq. feet (the bow cabin is 88 sq. feet), there isn’t even room for a bedside table. Nonetheless they are bright and cheery, with cupboard space, reading lights and relatively large en-suite bathrooms. All bathrooms, which are decorated in white tile with a blue Greek Key pattern, have a shower, basin and toilet. Amenities include a hairdryer, towels, soap, shampoo, shower gel and conditioner. Rooms are air-conditioned and have central heating. All current is 220 volts (North American appliances need converters) with the exception of the bathrooms, which have a 110 outlet for shaving only.

The cabins are located on the same level as the saloon, which is primarily taken up by the large dining table in its center. Two contemporary sofas along one side provide space for indoor reading and relaxing. The saloon also contains a bar, small library and stereo system with CDs. Rows of windows keep the room bright; deep, rich woods line the walls and ceiling, and classy oriental rugs cover laminate wood floors. Most of the socializing and activity take place, however, on Athos' barge-long upper sun deck with its redwood floor. Furnished with tables, chairs, umbrellas, loungers and railings adorned with live plants and flowers, it's a perfect extra room for this itinerary. Guests with mobility issues should be aware that there are several steep steps at the entry to the barge.

Meals are served in a single seating, with the occasional al fresco meal on the sun deck. Breakfast consists of a Continental repast with breads, croissants, yogurt, cereal, fruit, coffee and tea. Lunch is three courses served with a specially selected rose wine. Supper is four or five courses, served inside or on the deck, with regional cuisine paired with wine, desserts, cheeses, coffee and liqueurs. The dress code at all meals is resort casual, except for the Captain’s dinner on the last evening, which requires cocktail attire.

As on all of the hotel barges in European Waterways' fleet, Athos is an all-inclusive product, with wines, soft drinks, bottled water, beer, liquor and liqueurs, as well as all onboard meals and snacks, included. (Certain vintages of wine and Champagne -- except for the Welcome Aboard greeting -- are not included, but can be provided for a fee.) Shore excursions, usually lasting from two to four hours, typically take place once a day; all entry fees are included with your cruise fare. Optional activities, such as golf and hot-air balloon rides, cost extra. Two air-conditioned Chrysler mini-buses follow the barge's route and are available at designated times for transport.

Excursions on Athos might include winery visits and tastings, a visit to an olive press, guided tours through the towns and villages, and a visit to the Noilly Prat Vermouth distillery.

Athos carries eight touring bicycles; guests can easily disembark at a lock, ride off to visit a village or two, and catch up with the barge later. The boat also stocks board games, boules, and binoculars -- useful for spotting animals as you glide through the Petit Camargue.

The barge has five crew members: a skipper (captain), chef, tour guide and two hostesses. Gratuities are discretionary and typically average between four and seven percent of the fare paid, given to the Captain for distribution.