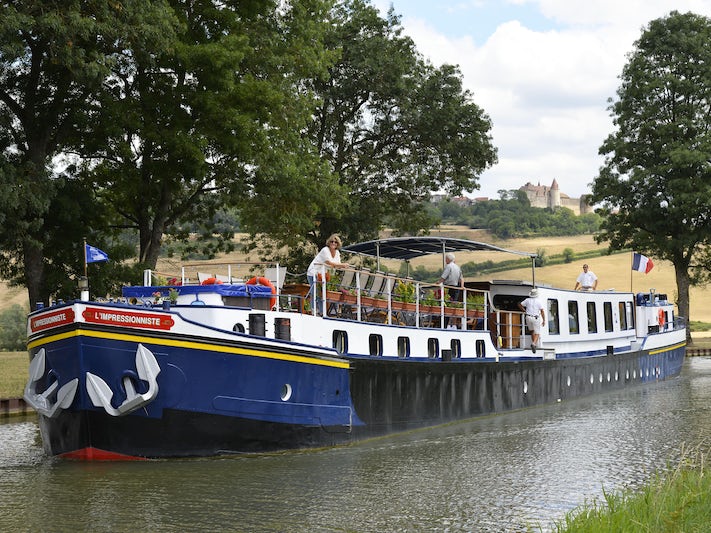 Traveling on a canal barge in France is as similar to mainstream cruising as a Twinkie is to a fine French pastry.

In other words, and simply put, there's no real comparison.

L'Impressionniste, like most of the barges in Go Barging's fleet, was built as a working vessel, to carry general cargo in Holland. Constructed in 1960, it's one of the younger barges belonging to European Waterways (Go Barging's parent company), but it's also, at 128 feet long, one of the largest.

When it was acquired by European Waterways in 1996, it was gutted and refitted as a hotel barge, with the addition of six bedrooms (a seventh, single room was recently added), a fully-functional kitchen, pleasant outdoor deck space and a living/dining room known as the "saloon." With its low (two decks) profile and upturned prow, L'Impressionniste resembles a big black slipper from a distance, with piping of gold at its front. Its flat bottom and low speed provide stability for the Rhone River, the Canal du Rhone a Sete, the Canal du Midi and the Herault River, its typical route in both directions.

The French have a word for these vessels that is much more pleasant and evocative than the English word "barge." They are known as peniches -- pronounced peh-NEESH -- and they can be found on the inland waterways of France throughout Provence, Burgundy, the Loire Valley, the Jura region...anywhere there is water, wine, cheese or history.

L'Impressionniste's six-night, one-way route starts in the Provencal city of Avignon and ends in Montpellier for Agde, and the ship sails the reverse itinerary back to Avignon on alternate weeks. The trip includes stops in Arles, site of Vincent van Gogh's most memorable paintings; Aigues Mortes, a medieval port with access to the Mediterranean; and Marseillan, home of the venerable Noilly Prat vermouth distillery.

It's an all-inclusive voyage, with beer, wine, liquor and most shore excursions included; there are five staff members on board including the skipper, a chef, a tour guide and two hostesses, all of whom speak English, French and often another language as well. The trip is placid, convivial, restful; it's filled with gastronomy, history, and -- with room for just 13 guests -- new and enduring friendships.

Traveling on a peniche is a specialty voyage, and as a result, guests on L'Impressionniste tend to be well-educated, sophisticated travelers who appreciate the fine dining, culture, history and wines of France. Go Barging is marketed internationally, so guests might be a mix of nationalities. On our voyage, everyone happened to be American, but the trip just before ours was filled with German nationals and the one just after with Brits.

Comfy and casual almost all of the time. Most people changed out of their jeans or khakis for supper, going the "resort casual" route -- slightly dressed up but not significantly. On the last night, for the Captain's Farewell Supper, a more formal dress is requested. Men wear suits or shirt and tie, and women wear cocktail attire.

The pace is very slow which means you can just hop on one of the supplied bikes and take a trip to the next lock or two, or even visit a nearby village and be back in time for lunch.We also visited the local market in Dijon to stock up on supplies and to provide lunch which Joss and the staff prepared for us when we got back to the boat.Read More
rwlid

A glorious gourmet cruise through Burgundy

You and 10 or 11 others are getting to know a way of life here in France’s Burgundy region in perhaps the most relaxed way possible – that is unless you are powering along on that mountain bike before breakfast and after dinner every day to work off the three gourmet meals, featuring 18 different regional cheeses and 21 different fine French wines (plus an open bar) served during the week-long cruise.We drive to Paris the following morning, already missing the unique experiences and feelings of a hotel barge canal cruise in the French countryside but grateful for the good weather (generally only one week in five has sunshine every day).Read More
mgrenby