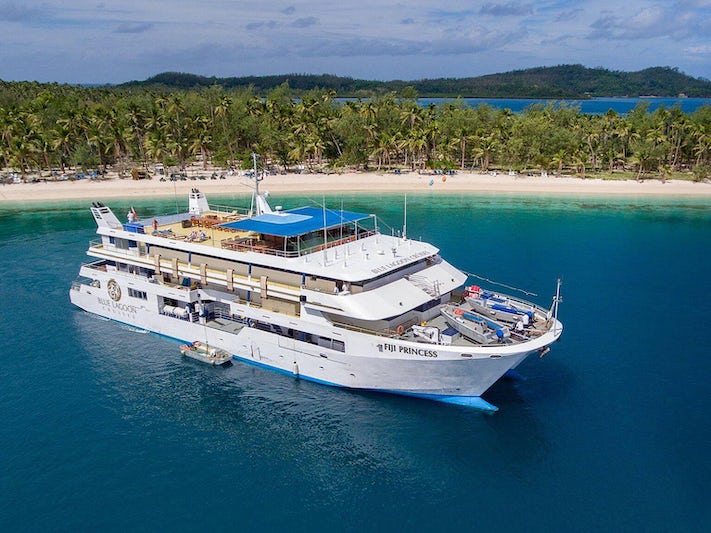 It was a bad week for Captain Bligh. Right after the infamous mutiny on the British ship in his command, HMS Bounty, cannibals in war canoes chased Bligh and 18 of his crew from the Yasawa Islands.

Based in exquisite Fiji location with great cultural interactions

Some dated facilities and smaller cabins

The Yasawas will look familiar if you've ever fantasized about the South Pacific. Remarkable for their long stretches of palm-studded white sand beaches, turquoise water and coral reefs teeming with exquisite marine life, the Yasawas are the playground for Blue Lagoon Cruises' one ship, Fiji Princess, which had a complete makeover in mid-2014.

The 68-passenger catamaran (formerly Le Meridien Group's Pearl of Seychelles) offers three-, four- and seven-day cruises through the Yasawas from Port Denarau, a purpose-built small cruise ship and yacht marina about 15 minutes south of Nadi airport. The port offers restaurants, shops and other facilities including banks, stores and day spas.

As we island-hopped through this archipelago, snorkeling emerged as the uncontested star attraction. On twice-daily excursions, we floated alongside huge flat-topped coral heads that rose to within several feet of the surface, nourishing brilliantly colored fish and jaw-dropping invertebrates like lacy blue jellyfish and purple sea stars. The soft corals appear in custom decorative colors like mauve, green and magenta. Happily, snorkeling is as brilliant there as diving, which is out-sourced to private operators and available on all cruises at an extra cost.

Another highlight of this cruise is learning about Fijian culture. The ship's relaxed atmosphere encourages dialogue among guests and the warm Fijian crew who hail from different parts of the country. In our first visit to Yasawa-I-Rara Island, we enjoyed a meke dance and singing performance and participated in a yaqona (kava drinking) ceremony. Another excursion takes place to a school; in 2014, for example, the ship visited Naviti High School and Naviti District Primary School on the island of the same name), where children performed a concert in Fijian and English.

There's something truly luxurious about being (almost) completely cut off from newspapers, television, Internet and cell phones. (The ship provides free Wi-Fi in the lounge area, but much of the time, Fiji Princess is out of range and can't pick up the satellite connection; it's the same situation with cell phones.) Our toughest decisions during this uncomplicated week involved choosing which paperback to read and whether to get up off the hammock for morning or afternoon tea. Like the tides, the daily itinerary was flexible, and we quickly adjusted to the relaxed, informal pace. Most passengers, including three honeymoon couples, were first time Fiji visitors like us. The majority were Aussies and Kiwis.

On our last day, we gathered in the lounge bar, watching wistfully as the Fiji Princess sailed toward Lautoka. After exchanging e-mail addresses and hugs with fellow passengers, the crew sang Isa Lei, Fiji's moving farewell song: "... Isa lei, the purple shadows fall. Sad the morrow will dawn upon my sorrow. Oh! Forget not, when you are far away, precious moments beside Suva Bay."

This trip attracts active types and snorkel enthusiasts between 40 and 60 years old. Most hail from Australia, New Zealand, the U.S. and Europe (in that order). On our sailing, there were honeymoon couples from New Zealand, the U.K. and Japan.

From mid-2014, children younger than 14 years will only be accepted on special holiday cruises, which coincide with the Australian and New Zealand school holidays. These periods are the Christmas/January break from around December 20 until the end of January; and for two-week periods in April, July and September/October.

Various fancy dress occasions may include a crazy hat or Indian outfit contest, for which you only need a good imagination (think found objects you pull together from adventures ashore and onboard for the former), while there may be one formal night. It always pays to pack a bit of glamour, be it a cocktail dress for women or a stylish shirt and jacket for men, although this is entirely optional and most men forego the formality in the South Pacific. For village visits, women are asked to cover shoulders and knees.

Although entirely optional, many passengers bring gifts for children at the village school. Such items include art supplies and new or used books. Books can include story books and exercise books (lined books for writing in class) but not text books because the Fiji Education Ministry has strict guidelines regarding texts taught in government-run schools. These gifts are gratefully accepted; the cruise line will also transport and distribute educational items and other gifts donated by past passengers.

We chose Fiji Princess as it fitted our itinerary for Fiji. Also Blue Lagoon Cruises offered a two for one deal which made for a very competitive deal.Read More
J PMoody

Loved It, For The Third Time!

That's one of the things I love about coming to Fiji.Read More
50surgeries

This is the best way to really see Fiji, away from the resorts.Read More
Linda Rawnson

Best holiday we have ever had

We wanted to cruise around the Fiji Islands. The Captain has no control over the weather but he always found safe mooring at night.Read More
GWAD