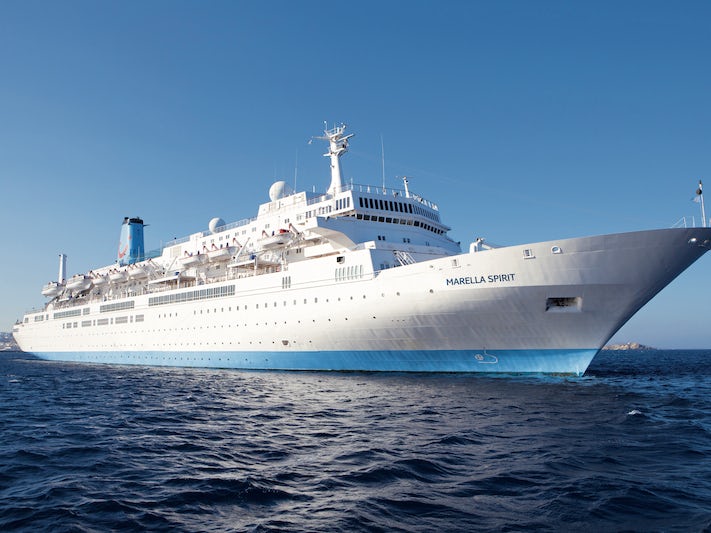 Editor's note: Marella Spirit sailed its final itinerary for Marella Cruises on October 21 2018 and has been scrapped.

An ultra-friendly and relaxed ship aimed at the British market

Lacks the bells and whistles of modern vessels

Great choice for value-for-money cruises for all the family

The longest-serving member of Marella's six-strong fleet, Marella Spirit started life in 1983 as Holland America Line's Nieuw Amsterdam. In 2000, the vessel was taken over by the now-defunct United States Lines and renamed Patriot, before being taken over by Louis Cruise Lines. Following a refit in 2002, Louis chartered the ship to Thomson (as it then was) and, in May 2003, the vessel began sailing as Thomson Spirit, before being renamed Marella Spirit in 2017.

As an older, midsize ship Spirit has many of the trappings associated with traditional ocean liners -- all part of its appeal and one of the reasons it has built up a loyal following of repeat passengers. Features include good-sized cabins, a lovely wraparound teak deck and spacious public areas, such as a surprisingly large reading and games room.

Another big draw -- particularly for first-time cruisers -- is the tried-and-trusted brand name of the U.K.'s largest tour operator -- Thomson (now TUI). Passengers who have gone on TUI's package holidays can expect a similar experience at sea and a product that is firmly aimed at the British market, particularly on the food and entertainment front.

As a result, the vast majority of passengers are British. Although some cruises -- in particular shorter ones -- can attract people from other nationalities, such as the U.S., who might be on holiday in the U.K. and want to sample a British cruise experience.

Spirit makes no bones about where it stands in the market, offering great value cruises with none of the bells and whistles or hot and cold running butlers associated with high-end cruise lines. That said, even seasoned cruisers would be wrong to be sniffy. By splashing out a relatively small amount of money on a cabin upgrade and choosing where you dine, Spirit offers a comfortable experience, along with some amenities you don't get on larger, modern ships.

A winter 2013/2014 refit saw balconies added to 19 suites and deluxe cabins on Eagle Deck 9. The face-lift also included new decor in the cabins and upgrades to the Raffles Bar and Broadway Show Lounge

Most of the passengers on Marella Spirit are from the U.K. and tend to be younger than those on other cruise lines popular with the British market, such as P&O Cruises and Fred. Olsen. Longer cruises tend to attract couples, mid-40s upwards, and during school holidays and on short taster cruisers there will be a large number of families. Many have cruised before with Marella or gone on TUI land-based holidays.

The ship has a laid-back atmosphere and the dress code is very casual by day, with jeans, shorts and T-shirts being the norm. In the evening it errs towards smart-casual, particularly in the Compass Rose and Sirocco's restaurants. There is one formal night each week, which coincides with the captain's gala cocktail party. Some -- but by no means all -- men opt for black tie (tuxedos are sold in the onboard shop), with others wearing jacket and tie. Most women wear cocktail dresses.

As we left the port entrance, cruise director Ted reminded everyone that Spirit had visited 41 countries and 213 ports whilst covering over 700,000 miles for Thomson/Marella over 16 years.... Read More
Petrosey

Last visit to this wonderful ship

This was our seventh cruise on the spirit. The crew are the best like a big happy family who always make you fell welcome.... Read More
majaka

The whole crew contributed to a great cruise and will always be remembered for the unique "Spirit" of the Spirit. It is sad that the ship is going.... Read More
Janis.Mackie

Have been on marella cruises before and have generally enjoyed them although have never been on spirit before. Chose this cruise as the itinerary was less arduous than others we had been on.... Read More
Story58