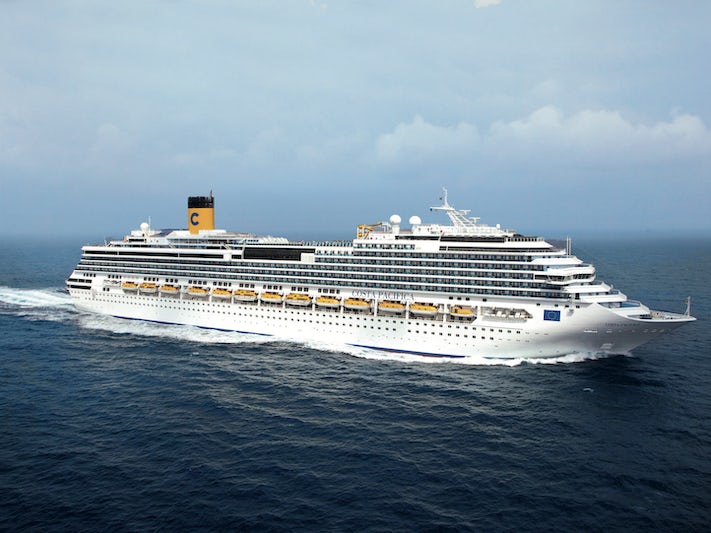 Big, bold and brash, the ship will also be relatively familiar to fans of Carnival's Conquest class; the layout's basically the same, and Costa Pacifica's interiors have been decorated by Joe Farcus, the long-time Carnival designer (and now a stalwart leader of the Costa new-build team).

All of Farcus' ships are designed around themes, and Pacifica's is music. It's amply represented in the ship's decor -- artwork, from antique violins to prints of scores, is simpatico, and decks are named after music styles. What's interesting here is that the theme is also carried through in ship activities. Unique to Costa Pacifica are cruising's first-ever recording studio (more on this below) and a "music maestro," who oversees the unusual-for-Costa enrichment opportunity. In this case, passengers can learn how to play piano, guitar and drums during their time onboard.

Beyond music, Costa Pacifica, which (like its Concordia-class siblings) is one of the largest in the Costa fleet, will appeal to travelers who want numerous entertainment options (from the rollicking two-deck Disco Fever to the elegant Wien Wien, a Viennese-inspired lounge that offers classical performances), an elaborate spa and excellent facilities for kids, all at extremely good value-for-money fares.

The New York, New York and My Way restaurants (clearly a nod to Frank Sinatra) serve as the ship's main evening venues. Seating is prearranged at set times and with set tablemates. The ship attracts lots of passengers sailing with groups of friends and family, so most tables in the restaurants are large; there are only a handful of two-tops.

Breakfast and lunch, which are both open-seating affairs, are offered in New York, New York, every day.

Deck 9, home of the pool deck, is the locale for the vast lido buffet venue. On your first few visits to La Paloma buffet (particularly at lunchtime), take a few minutes to walk around the entire eatery, which features different themed sections like French, Italian, Mexican and Asian (including sushi). The lunch buffet also has hot entrees, cold sandwich fare and pizza. (Oddly, given Costa's Italian roots, other lines, such as Carnival, have much better pizza.)

Other lunch options include the Ipanema Grill and the Lido Calpyso. Adjacent to the Deck 9 pool areas, both offer steam table grill items (no cooked-to-order food here), such as chicken, hot dogs, hamburgers and French fries that are invariably lukewarm.

The Club Blue Moon is the ship's gourmet venue and, like others in the Concordia family, is overseen by Ettore Bocchia. Bocchia is highly regarded as the innovative executive chef (and Michelin-starred restaurateur) at the Grand Hotel Villa Serbelloni in Bellagio on Lake Como. His claim to fame is establishing Italian molecular gastronomy, a trendy food movement that experiments with chemical reactions to ingredients by cooking at different temperatures. Bocchia's molecular dishes had been introduced on earlier Costa ships, but at our dinner at the cozy Blue Moon, we were told that the line is actually trying to downplay the trendy culinary approach. Only one ice cream dish on our menu was prepared according to the molecular tenets -- and the only noticeable difference was that it didn't freeze your teeth like normal ice cream.

Reservations are required to dine at the Blue Moon, which is open only for dinner. Rather than paying a per-person service charge to dine there, passengers pay a la carte prices for menu items. Plates of antipasti were priced between 6 and 7.50 euros, mains were 6.50 to 8 euros, and desserts ranged from 4.50 to 6 euros.

The Samsara Spa restaurant, primarily limited to passengers who've booked the ship's spa cabin packages, was not yet open on our pre-inaugural voyage. Cuisine served there is prepared healthfully. Regular passengers are invited to book on a space-available basis; a service fee of 20 euros per person, per visit, is levied on passengers who are not residents of the ship's spa facilities.

Of 1,504 staterooms, there are 70 suites and 521 verandah cabins. The rest are standard insides and outsides. If so much of Costa Pacifica feels innovative, its staterooms are pretty traditional and, frankly, sport rather bland decor. If you've cruised on a more contemporary Carnival ship, you'll feel quite at home; these cabins are essentially identical. Their only unique touches are flat-screen televisions with interactive systems that allow passengers to book shore tours on-screen.

Beds come in two configurations: twins and queens (and can be converted from one arrangement to the other). Sofa areas and vanities/desks with bureaus (and hair dryers tucked into the top drawers) finish out the cabins.

Adequate storage space is found in three-door closets and in the desk drawers.

Bathrooms are shower-only and feature the dreaded, clingy, film-like shower curtains (rather than shower doors, which are popular on other lines). The only toiletries provided are stingy-sized bars of soap and in-shower dispensers, offering combination shampoo/body wash.

Bathrooms in suites and spa cabins are outfitted with mini-bottles of a Costa brand of soap, shampoo and shower gel. Spa cabins are equipped with the same basic facilities as standards, verandahs and suites, but have a soothing color scheme and mini-bars that are stocked with healthful drinks.

Some Costa Pacifica features and amenities that may seem pretty avant-garde and exciting to first-time Costa travelers are already cornerstones of Costa's newer ships. Among them? The Grand Prix driving simulator offers more options than a similar Formula One-inspired ride on MSC Cruises; you can choose from more courses and also pick manual or automatic controls.

Costa's creation of a spa-oriented cruise experience -- by giving certain cabins special decor and offering a dedicated restaurant -- was the first of its kind in the cruise world. And, though lines like Holland America and Celebrity Cruises are attempting to replicate the concept, Costa's is still the best executed. On Costa Pacifica, 91 cabins (mostly on Deck 10) are dedicated to wellness cruise packages. (Though furnished similarly to standard cabins elsewhere, these staterooms feature streamlined decor, using natural color schemes.) The spa facility itself features a gym, exercise room (where classes in yoga and aerobics are held), thalassotherapy pool, sauna, beauty salon, Turkish bath and UVA solarium (sun beds).

We love the way the entertainment district is centered on Deck 5; here you'll find easy access to the Grand Bar Rhapsody (the primary venue for dancing), the casino, a cigar bar, the Route 66 sports bar, Piano Bar, Rock Around The Clock for country and soft pop, and Wien Wien. The ship's wee-hours disco (and, indeed, it's open almost until breakfast) is two decks high; you enter on Deck 4, but it's possible to look down on the action from the casino on Deck 5 through glass walls.

The state-of-the-art recording studio onboard is truly a magnificent new feature. It's tucked away in the back of the ship's main theater. For 35 euros, passengers can book one-hour stints in the specially created facility. Technicians are on hand during your recording session, and afterward, they mix and edit your CD. The finished product is delivered to your cabin. This is much harder than karaoke; a member of the tech crew said it's important to really know your song before you start.

The ship's two main pools are both equipped with magrodomes -- glass roofs that can open or close, depending on weather -- and that makes the ship an ideal choice for winter cruising in the Mediterranean.

Playstation World, in a small room off the casino, offers passengers a chance to play various games in a public setting. On nice evenings, there are even Playstation events in the Calypso pool area, which has a huge television screen.

Skip the lines at the purser's desk (or shore excursion counter) by using electronic kiosks, or "totems," set around the ship. There you can find information (such as activities listed in the daily program), browse spa offerings or book reservations for the Grand Prix simulator, recording studio, tours and restaurants. Next door to some, though not all, of the totems is another clever device: a machine that allows you to link your credit card to your onboard account so you don't need to queue up at the purser's desk.

Costa continues to enhance its Squok Club offerings, but the program doesn't compare, in facilities or activities, to uber-family-friendly lines like Princess Cruises and Royal Caribbean. Costa Pacifica merely offers a playroom for kids ages 3 to 11 (a pretty broad age span) and a teen center for ages 12 and older. (American-based lines typically break children into smaller groupings: 3 to 5 for the youngest set and 15 to 17 for the oldest.) But it's important to note that European families tend to spend more time hanging out together, rather than signing up for activities and events, than do North Americans, who are more kid program-oriented.

The coffee and chocolate bar is unique to Costa Pacifica, and the smells wafting outward are tantalizing. The chocolate selections, at least on my visit, seemed pretty paltry. (There's a fondue option, but I didn't see much else.)

I was truly appalled to learn that spa-treatment rooms are equipped with flat-screen televisions on which Costa shore tour and spa service promos ran throughout my massage. Is nowhere sacred?

After spending a few days onboard Costa Pacifica, my first cruise on Costa in five years, it was clear that the line continues to deftly balance European cruise traditions -- such as the set-seating scenario in dining rooms, a solid if unflashy kids' program and vibrant entertainment programs -- with a healthy dose of contemporary amenities like Playstation World, a giant poolside movie screen, the recording studio, the Samsara Spa complex and new enrichment activities in music. The ship primarily targets those who seek a lively nightlife, enjoy a European interpretation of cruising and travel in packs (whether as family or extended groups of friends). The crucial caveats for non-European travelers intrigued by Costa Pacifica are these: There are lots of smokers, announcements are given in five languages (crewmembers, mostly from the Philippines, speak excellent English), and the onboard ambience is a bit more big-city than cozy-village -- meaning that having such a multi-cultural blend of passengers definitely makes meeting new friends somewhat of a challenge.

Get Costa Pacifica price drops
250,000+ people have entered their email

Find a Costa Pacifica Cruise from $239