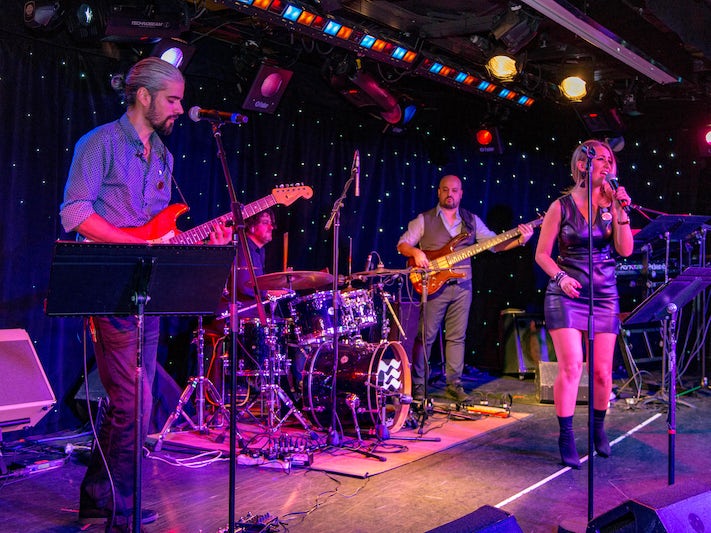 The main theater onboard Ruby Princess is where you'll find several big-stage musicals. The costumes and story lines during each is creative, and the singing and dancing always got the crowd into the spirit. One thing we noticed was that young kids were noticeably absent, but the older crowd especially enjoyed the shows.

In addition to the nightly performances, the theater is the setting for daily nature lectures when the ship is in Alaska.

During the day you'll find plenty of daily entertainment including trivia, lectures and live music. On warm weather sailings, you'll find many people by the pools and pool games are a popular attraction.

During the day, you'll also find concerts and sports games broadcast on the giant Movies Under the Stars screen by one of the pools.

There's lots to do at night on Ruby Princess, including energetic karaoke, dancing, live music, comedy and the once-per-cruise balloon drop (a Princess tradition that is held on the second formal night). Live music is available in several spots; from solo singers to trio instrumental performers, there was no shortage of tunes to be heard.

The bars throughout the ship were busy but not packed (meaning you could always find a stool or seat and make yourself comfortable), and many people were up past midnight. The Skywalkers Nightclub drew a crowd of dancers each night.

Every night also features films as part of the line's Movies Under the Stars offering. Feature films are either family-friendly or geared toward an older audience. At all showings, popcorn is offered, as are fleece blankets (especially useful during cold and rainy Alaska sailings).

Another popular activity is The Voice of the Ocean, which was inspired by the popular TV show and includes blind auditions, mentor sessions and coaches all playing a part to finding the winner. Audience participation was very active, and on our sailing, it was especially popular with the 30- and 40-something crowd.

The casino on Deck 6 was well-attended during our sailing. Adults could take part in gaming lessons, playing slot machines and more. The most popular games seemed to be blackjack and Texas Hold'em.

Vines (Deck 5): Located in the Atrium, this wine bar has a nice selection of both sparkling wines and regional vintages. Complimentary tapas is served with each alcoholic drink.

Speakeasy Cigar Lounge (Deck 6): This cozy spot is the place to be for those who enjoy cigars; it's the only place onboard where you can smoke them.

Explorers Lounge (Deck 7): Live music and nightclub-esque decor makes this place a happening spot at night, and it seemed to attract the most gregarious cruisers onboard. It wasn't uncommon for people to quickly make friends and start hanging out together here most nights.

Club Fusion (Deck 7): Club Fusion is the scene of karaoke contests, live music and theme parties -- like a disco night or 80s night.

Wheelhouse Bar (Deck 7): This laid-back space is a good place to meet up for a drink or play some cards or board games. Some nights they also had live music, and on those nights, it was more lively.

Crooners Bar (Deck 7): This small bar is for the old-school crowd interested in Sinatra tunes and a classic drink menu like signature martinis.

Adagio Bar (Deck 16): Featuring live music and Italian cocktails, this is a good spot for pre- and post-dinner drinks. And due to its location -- up so high on Deck 16 -- it has a great view.

Skywalkers Nightclub (Deck 18): During the day, Skywalkers is a great place for chilling out while checking out the panoramic views. At night, it's where you'll find DJ-ed music and a dance floor. It draws a good crowd but never felt crowded. On Alaska cruises, this is also where the onboard National Park ranger gives lectures during Glacier Bay sailings.

The Calypso Reef & Pool on Deck 15 is a good spot to chill out; there are lounge chairs and two whirlpools nearby. Another good pool spot is Neptune's Reef & Pool also on Deck 15 and located near the Trident Grill and Pizzeria; this is the most popular pool and the one where all the kids hang out. There are plenty of lounge chairs and whirlpools nearby.

For a quieter spot, go to the Terrace Pool on Deck 14; it's located on the Riviera Deck below the Horizon buffet.

Finally, the Lotus Spa Pool on Deck 16 is the adults-only pool with a hot tub, lounge chairs, tables and umbrellas.

Ruby Princess is not an overly active cruise ship, but there is a Sports Court used for basketball, volleyball and pickup games. There's also a nine-hole miniature putting course and a golf simulator for those who love the game or are newbies and want to have some fun. There's also a jogging/walking track around the ship.

If you're looking for outdoor space, head to Deck 16, which has the most space and lounge chairs. The pools also have space (it's a bit louder here, but good if you have kids). Many people hang out on the sun decks, playing cards or taking in the scenery. There were lounge chairs throughout and unattended items left past 45 minutes were removed, so someone else could use the chair.

The Sanctuary on Deck 17 is for adults only and entry comes at an additional cost ($20 for half-day; $40 for the whole day). You're paying for seclusion and exclusivity, plus the lounge chairs here are padded, so they are supercomfortable.

If you didn't pre-book your excursions, you can head to the excursion desk on Deck 6, which has a long line on Days One and Two of the cruise. Guest services is also on this deck (hint: they know a lot of about excursions as well, so if the excursion line is too long, head here).

The library on Deck 7 has books, board games, cards, brainteasers and puzzles. Plus, it's just a good spot to read or get away from the crowds.

There is an internet cafe on Deck 5, but few people used it. Most people bought a package for their phone (packages start at $73). The Princess@Sea app is free and it's a great tool to check out menus, show times and themes, and daily activities.

Every floor (that has cabins) has self-service laundry with washers, dryers, ironing boards and irons. You can use your keycard to buy detergent and use the machines. There's also dry cleaning service available for pick up in each cabin (for a fee).

The photo gallery on Deck 7 is the place to find all the professional photos taken during the cruise (starting embarkation and including formal nights). Photo prices start at $10.

What's cruising without an art gallery? Pieces here (Deck 5) go for several hundred up to several thousands of dollars. There are also art auctions, though more people show up for the free sparkling wine than to bid on art.

If you forgot something at home or want to buy souvenirs (ranging from key chains to jewelry), no worries, there are two stores on Deck 6 (Calypso Cove and Meridian Bay) and two on Deck 7 (Essence and Facets).

The spa on Ruby Princess, located on Deck 16, offers a variety of body treatments, acupuncture and medispa options, while the salon has hand and foot treatments as well as haircuts, coloring, styling options and teeth whitening. Slots fill up quickly, especially on sea days so make your bookings online before you sail or head to the spa on Day One.

Men can take advantage of the "Time for Men" menu featuring comfortable, fuss-free services. The Barber on Board offers shaves, as well as face and scalp massages. Other options include special hair care, facials and body treatments designed just for the guys.

Teens can get in on the action, too, with the YSPA program, especially for ages 13 to 17. The Heavenly Massage and Fabulous Fruity Facial are popular choices. Teens can indulge in spa treatments alone (if 16 or older with parental permission) or can pair up with mom or dad (mother–daughter; father–son).

For those who prefer to lounge away the day inside the spa, there's a sauna and steam rooms, and -- for an extra charge -- passengers can book the thermal suite, which has different chambers that release a variety of dry heat, steam and mists into the air with aromatherapy-filled vapors. The big draw here is the warm stone beds. You can buy a day pass or a pass for the whole cruise. Prices vary depending on the length of the cruise and the ship's itinerary, but typically a day pass is around $29 or $129 for the duration of the cruise.

The gym on Ruby Princess is well maintained and has the standard gym equipment -- treadmills, bikes, elliptical machines, weights and yoga mats. You'll also find a host of complimentary classes (like stretching) and seminars led by the gym staff (and often attended by the older clientele) including Detox for Health & Weight Loss and Relieving Back Pain and Improving Posture with Good Feet. (These seminars are really just sales pitches for a variety of products so be prepared for a hard sell.) The gym is most crowded in the mornings between 6 and 9 a.m.

Cruising is a popular family vacation, and we saw kids of all ages aboard the Ruby Princess. With a full kids club offering, cabin categories with tubs and services like crib rentals and complimentary jarred baby food, Ruby Princess is a good choice for families.

In addition to the kids' camp, there are plenty of opportunities for kids and their families to have fun, including backstage tours to see how production shows are created aboard the ships and, in Alaska, Puppies in the Piazza, where kids and adults can interact with Alaska dog-sledding huskies.

Camp Discovery is the name of the onboard kids program; families are free to visit some of the Camp Discovery areas with their babies, ages 6 months to 2 years old, but most sections are off-limits to under 2s.

The camp is divided into two groups depending on age.

The Treehouse is for 3- to 7-year-olds who are kept busy with coloring projects, toys, books, dance parties and sing-alongs. Kids in this age bracket must be signed into and out of the camp by a parent or designated guardian.

The Lodge is for the tween set (ages 8 to 12); as long as parents sign a waiver giving permission, kids of this age can come and go as they please. Counselors here will keep the kids busy with talent shows, dance competitions, rocket-building Lego contests, paper airplane challenges and treasure hunts. The space also has video games, which is a big draw.

The Beach House teen center is for 13- to 17-year-olds. They have video game tournaments; air hockey, foosball and Ping-Pong games; dance parties and movie nights.